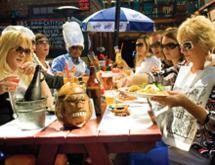 That’s the secret to success for this 25-year-old fast-casual dining group, which lures in tourists at its eight locations throughout the United States. Between its reasonable prices, anything-goes atmosphere and penchant for providing refuge from the everyday world, Dick’s Last Resort is growing its revenue during the recession while some of its competitors struggle to survive.

“In this economy, I believe that people are really looking for an escape, and Dick’s gives them a way to do it,” says Ralph McCracken, president and COO of DLR Restaurants, which purchased the Dick’s concept two years ago. “Our M.O. is to have people come in, have a good time, and laugh a little before they go back out into the cold, cruel world.”

That’s the secret to success for this 25-year-old fast-casual dining group, which lures in tourists at its eight locations throughout the United States. Between its reasonable prices, anything-goes atmosphere and penchant for providing refuge from the everyday world, Dick’s Last Resort is growing its revenue during the recession while some of its competitors struggle to survive.

“In this economy, I believe that people are really looking for an escape, and Dick’s gives them a way to do it,” says Ralph McCracken, president and COO of DLR Restaurants, which purchased the Dick’s concept two years ago. “Our M.O. is to have people come in, have a good time, and laugh a little before they go back out into the cold, cruel world.”

Diners of all demographics flock to Dick’s Last Resort for classic American fare, flowing stiff drinks and irreverent servers ready to keep the laughs going throughout their visit. Today, the concept has locations in the tourist hubs of Chi­cago; Boston; Myrtle Beach, S.C.; Dallas; Baltimore; San Antonio; San Diego; Las Vegas; and two on the way in downtown Gatlinburg and Nashville, Tenn. The formula is working for Dick’s, with same-store sales up more than 6 percent in the last year and parties averaging six to eight people per table. Plans also are in the works to expand this crazy culture into other high foot traffic markets like the Fisherman’s Wharf area of San Francisco, New York’s Times Square, Atlantic City, N.J., and Key West, Fla. McCracken says the concept could soon look into some international opportunities, as well.

When patrons arrive at a Dick’s, they immediately notice the countless photos of revelers from the past — some > > famous and others just enjoying a night out – as well as a certain kind of “swag.” If visitors decide to belly up to the bar, they’ll need to duck to avoid the bevy of bras left behind by well-served ladies who visited before them. Bar­tenders sling drinks like the “Killa-Rita” (the Dick’s version of the classic margarita) and the Ka’Mana Wana Lei-a, which features Cruzan banana rum, peach schnapps, blue curacao and tropical fruit juices served on the rocks in a real hand-carved souvenir “Dick head” coconut.

All drinks are available for diners, as well, served by the surliest and best servers in the industry. In fact, Dick’s doesn’t hire its servers based on the length of their resumes. Instead, general managers put potential candidates through a live audition so they can showcase their skills in insult comedy – all in good fun and fun for all, of course.“We want dynamic people that can meet the public,” McCracken says. “We want their individual personalities to come out. That’s what guests really don’t receive at most other restaurants.
“Other restaurants have order-takers and, sure, we take orders too, but we have a completely different way to accomplish this feat,” McCracken adds. “Every server and bartender has to be signed off on as an entertainer as well as a server, which is highly unusual in the restaurant industry.”

Classic appetizers have a special Dick’s spin to them, as well, including the “crabby balls” (deep-fried balls of crab meat), “gator bites” (deep-fried alligator tail) and “motha cluckin’ good chicky wings” (chicken wings with buffalo or barbecue sauce). Once the food arrives, don’t sit back and wait for appetizer plates – Dick’s skips this step to encourage sharing among diners. The lunch and dinner menus feature the same tongue-in-cheek style on classic entrees. These include the “Ass Byte Burgers” (three hand-pattied, bite-size burgers on mini buns), the “Dolly Parton” (a “voluptuous” chicken breast served with rice) and the “Ride ‘em Cowboy Rib Eye.”

Between courses, the serving staff breaks out the 2-foot-tall paper chef hats, which are perfect for scribbling less-than-flattering phrases about its guests. Whether it’s implying a particularly embarrassing fetish shared between members of the party or poking fun at the bald guy at the table, it’s all in good fun.Once everyone is sufficiently stuffed with food and cocktails, they’re treated to a classic rock band at most locations every night of the week depending on the time of year. Each Dick’s Last Re­sort also runs promotions ranging from Elvis Nights, to celebrate the King’s birthday to holiday celebrations. Each location also hosts countless private events including parties, corporate outings and fundraising events.

In 2010, the Dick’s Last Resort concept celebrated its 25th anniversary in the grand style that only Dick’s Last Resort can. The restaurants marked its “slightly tarnished” silver anniversary by giving patrons the opportunity to post their own pictures on the walls of its locations as well as write notes to “Dick” himself. The company also created a “big-ass” beer glass featuring a colored logo commemorating the anniversary.

Although 25 years of operation is plenty of reason to celebrate, Mc­Cracken admits that there were a number of areas to enhance at the restaurants when DLR took charge. “We needed to bring the concept into this millennium,” he says. For instance, most of the promotional materials – including some menus – were still printed in black and white as of two years ago. DLR immediately upgraded to color for all of its printed items. The company improved the music quality in the Joints and redesigned the website. Dick’s Souvenir selection was also expanded and the quality was vastly improved.

Operationally, McCracken says DLR leveraged its purchasing power by consolidating this function out of its headquarters in Nashville instead of leaving it up to the individual locations. This has led to cost savings because, instead of each location acting on its own, the company can approach suppliers of food, linen and other essential materials on behalf of eight locations. This also gives each location’s general manager more time to focus on the specific needs of the restaurant.“This procedure takes some of the office time and effort out of the GMs’ hands,” McCracken says. “Now, management can spend more time with their staff and the many fun-loving guests that come into our Joints.”

After getting to know the brand inside and out for a couple of years and placing its own stamp on the concept, DLR is gearing up for some additional opportunities in the future. McCracken says DLR may acquire or create new concepts in the future, but he knows there is plenty left to accomplish with the Dick’s brand.“For the next good bit of time, there are plenty of opportunities for Dick’s,” he says. “We’re not going to turn down anything in terms of opportunities because we’re in the entertainment sector of the business.”

However, DLR will not expand into new concepts or cities lightly. McCracken says it takes more than experience to work for Dick’s and be successful at it. The company seeks employees who buy into the fun-loving concept and are willing to do what it takes to make sure every guest has a memorable experience with Dick’s.“The key is looking for good people with the drive and passion to do it,” he says. “You gotta have that enthusiasm to be successful. It’s more than just taking an order or flipping a burger.”