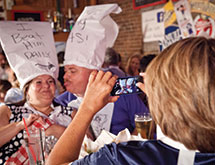 It’s much easier to count the number of years Dick’s Last Resort has been in business – 30 – than it would be to calculate the number of jokes made, napkins thrown, silly party hats worn or laughs and smiling faces induced there. “We’re all about having fun,” says Ralph McCracken, president and COO of the Nashville-based casual dining restaurant group. “Dick’s is unique from any other concept – there’s nothing else like Dick’s, and all of our locations are a bit different from one another.”

The brand, which operates 16 locations across the United States, attracts large, multigenerational groups of family members, business associates or friends who are out for a special occasion – such as a bachelor or bachelorette party – or just a general good time. Fun-loving and outgoing front-of-house greeters and servers guide and enhance the experience in numerous ways including making jokes, placing party hats with tailor-made sayings on guests’ heads and starting paper napkin-throwing “battles.”

“Our servers and bartenders are what really set us apart from others,” McCracken says. “These folks get to be personable and are not scripted in terms of what they ‘have to’ say. We empower them to serve in their own personal way.”

All servers must go through a live audition before being hired. “They already know the basics of serving, but we must coach them on the unique Dick’s culture,” he adds. “Our servers are personable and can be sarcastic, rowdy, irreverent and off-the-cuff, but it’s all in the name of fun and not meant to be rude, nasty or mean-spirited.”

Front door greeters also play a very important role in the overall experience at each location. Greeters ask guests if they’ve been there before, and then let the server know if their style of humor needs to be adapted to a particular situation.

“We’re a place where people of all ages can come out and escape reality for 60 to 90 minutes,” McCracken says. “My biggest reward is seeing families and groups of people laughing, having a good time and letting their hair down for a while.”

Comfort Zone
Although Dick’s Last Resort is more known for its unique environment and staff than any other part of its operation, the restaurants don’t skimp when it comes to the food quality. “People come to Dick’s and eat, but they don’t necessarily come to eat,” McCracken says. “The consensus among our guests is that our food is a lot better than they expected, which is extremely rewarding to us.”

Food is prepared in a traditional manner that includes hand-breading chicken. “We take a lot of pride in our food, and are constantly looking at ways to enhance the menu while still focusing on comfort food,” he adds.

No printed menus are distributed at Dick’s Last Resort in the evening. Menus of “food everybody recognizes” are on a chalkboard and in the servers’ heads. “There isn’t anything on our menu you can’t pronounce,” McCracken says.

Servers verbally guide guests through the 12 to 15 food items. The dinner menu is purposely limited to allow back-of-house operations to accommodate large groups of people and ensure product quality, he adds.

Many of Dick’s Last Resort’s employees have worked there for the majority of its 30-year history. This even includes bussers, some of whom have been there for 20-plus years. McCracken credits this to the restaurant’s fun-loving atmosphere and its positive internal culture. “At Dick’s, our management team works for their staff, and their staff works for the guest,” he notes. “We all realize that the guest pays us all!”

“Making Memories”
McCracken, a 40-plus year veteran of the casual dining industry, and his team purchased all but two of Dick’s Last Resort’s locations in late 2008. The locations not owned by the Dick’s Team, DLR Restaurants LLC, are in Chicago and Dallas, and are currently operated by Dick’s original owner and original director of operations, respectively.

The majority of Dick’s Last Resorts are located in high-profile parts of large-market cities, particularly those that attract a significant amount of tourism and convention activity. All locations are within easy walking distance of hotel rooms and other amenities.

“Most of our guests – 70-plus percent – are visitors who are in town for three to four days,” McCracken says.

The average party size is six to eight people, and roughly 65 percent of Dick’s Last Resort’s customers are female. “Women love to go out and have fun in groups, and at Dick’s, they can do that in a safe environment,” McCracken notes.

The restaurants report a 3.6 percent increase in same-store sales within the past year, and anticipate serving roughly 3 million people in 2015. Further growth is anticipated later this year, when Dick’s Last Resort opens its newest location in Columbus, Ohio. The Columbus restaurant will be next door to Nationwide Arena – the home of the National Hockey League’s Columbus Blue Jackets – and adjacent to a convention center.

The new location in Columbus reflects the company’s desire to also move Dick’s Last Resort’s growth into some second-tier urban markets that offer more “A-plus” locations. New restaurants that recently opened in mid-tier urban markets include Indianapolis and Cincinnati. “It’s a bit easier for us to find locations in these markets,” he says, noting the rarity of high-profile sites in larger cities. “We’ve been successful opening in second-tier markets, where we know the concept can do well.”

Dick’s Last Resort intends to double its size before 2020. “We know we have something to offer that works, since we’ve been around for 30 years,” McCracken says. “We want to bring our unique brand to other markets, because we believe there’s a need in the world today for all of us to escape reality every now and then. We make memories for our many guests at Dick’s; if we can do that and still provide great food, I know we can be around for another 30 years.”