Back to Profile Gallery > Dinosaur Bar-B-Que 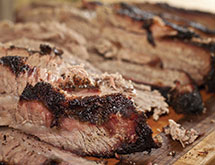 Whatever the factors were that went into naming Dinosaur Bar-B-Que, one thing’s for sure, they had nothing to do with the prehistoric creature’s extinction. From a mobile operation that started 32 years ago to feed the biking community of upstate New York, to the eight-restaurant operation it is today, it’s clear that Dinosaur Bar-B-Que plans to stay in business for the long term – and not just in New York. The company is following up its eighth location, which opened in Buffalo, N.Y., last year with locations number nine and 10 planned for Chicago and Baltimore, respectively.

Dinosaur Bar-B-Que opened its first brick-and-mortar spot in 1988, after five years of chasing around bikers with its mobile smokehouse. Founder and owner John Stage planted roots in Syracuse, N.Y., serving up down-to-earth, award-winning food and live music of an equal quality. It was 10 years before he would open a second location in Rochester, which was followed by a third location in Harlem in 2004. As the recession came to a close, the growth became more frequent with locations four through eight opening in 2010, 2012, 2013 and 2014.

“Once you have three successful stores, everyone wants you everywhere,” says Rene de la Garrigne, president and CEO of Dinosaur Bar-B-Que. “The expansion really came from a perfect storm. We had three successful locations. John’s new investment group came in and we had more money to build the brand. Things just catapulted.”

A City Near You
Dinosaur Bar-B-Que is now catapulting outside of its home state. It will move into Chicago this spring with an April 21 opening in the city’s popular Lincoln Park neighborhood. De la Garrigne says the Midwest market was an obvious choice for the brand’s first non-New York location.

“When John built the brand, a lot of the music tied into the restaurant was Blues, and what’s a better Blues market than Chicago,” de la Garrigne says. “When you see that natural connection between music and us, it’s easy to see why John started looking there first to see if it was a market we could be successful in. In visiting the market over the last two years and seeing the strengths of the city, we felt it was the perfect fit for us.”

The move to Baltimore will happen in September, adding a distinct voice to the city’s foodie scene. “Baltimore has such a strong food culture and we feel our food has a strong culture, too,” de la Garrigne says. “Bringing our quality product to Baltimore is going to be a good marriage.”

But before its marriage with Baltimore or its duet with Chicago could happen, Dinosaur Bar-B-Que had to lay down a foundation for growth. De la Garrigne stepped into his role a year-and-a-half ago, bringing with him more than 30 years of experience in restaurant operations.

Firm Foundation
“We wanted to make sure we had a strong foundation to move the brand forward,” de la Garrigne says. “So we built out our infrastructure to support the development and training of our people and to maintain our brand’s culture that we have had for 25 years. We spent time and money putting together systems and controls to build systematically rather than taking a shotgun approach. It’s the core to making opening new locations smoother and easier while not losing our culture.”

Dinosaur Bar-B-Que rewrote its entire training program for its managers to ensure core guidelines are being followed. The company also is investing in its kitchen and smokehouse staff to ensure the quality, taste and look of the food is consistent.

“Maintaining the culture in one, two or three restaurants is easy to do,” de la Garrigne says. “But when you get further away, you have to be more diligent about instilling that culture.”

The company also established new departments. The newly added food and beverage department will help Dinosaur Bar-B-Que with food purchasing and specifications – allowing the restaurants to control food costs and quality. Also, the recently formed marketing department will manage the brand’s image across national social media platforms, including Facebook, Twitter, Instagram and YouTube. The social media program is even more vital since Dinosaur Bar-B-Que doesn’t participate in traditional marketing, such as billboards, radio and television ads. Instead, Dinosaur Bar-B-Que has always relied on more grassroots efforts to build its customer base – good food and an atmosphere that spur word-of-mouth recommendations being chief among them. And it’s not just the bikers who show up.

“You can find any guest from any walk of life coming to our restaurants,” de la Garrigne says. “We have children next to bikers, next to businessmen, next to people who just got done working out, next to a table on a girl’s night out. And then you take the style and personalities of our hospitality – which is very friendly, very open and very authentic – and we know we can adapt to every guest that walks in and really take that service to next level.”