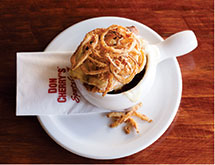 In hockey, a good game plan can take a team only so far. The individual skaters on the ice need to play up to their potential and be aware of opportunities like a loose puck or a goalie’s weak side. Canadian hockey icon Don Cherry knows this, and it’s the same basic philosophy followed by the chain of casual-dining restaurants that bears his name. According to owners and licensors Darrel and Chris Painter, Don Cherry’s Sports Grill has been successful not only because of its connection to one of Canada’s most popular public figures, but also because the company gives its individual locations a winning game plan and the autonomy to take advantage of their own opportunities.

Don Cherry’s Sports Grill is one of the leading casual-dining concepts in Canada, which is no surprise considering Cherry’s status as a long-running fixture on the Canadian Broadcasting Corporation’s “Hockey Night in Canada.” Darrel Painter says Don Cherry’s Sports Grill benefits from its connection to one of the most popular living Canadians, which includes frequent visits by Cherry to the chain’s 18 locations throughout Canada when he comes to town. “Don’s only getting more famous by the day,” Darrel Painter says.

The chain was founded in the late 1980s by Cherry, along with his family and a business partner. Originally called Don Cherry’s Grapevine, the chain grew under a franchise structure until it made the switch to a licensing-based model in 1995. The Painter family purchased a license to operate a Don Cherry’s Sports Grill location in the tourist town of Parry Sound, Ontario, and within five years that location was successful enough to put the Painter family in a position to purchase the entire concept.

Power Play
Painter says the licensing approach is a major reason for the success of Don Cherry’s Sports Grill. Rather than franchising a location that remains controlled by the main company, operators purchase licenses to either build a new location or convert an existing restaurant to the Don Cherry’s Sports Grill concept. Either way, Painter says, the company provides support through its buying group and provides the foundation for the menu, but otherwise stays out of the operators’ way. “We don’t come down and say, ‘You’ve got to do this and you’ve got to do that,’” Painter says.

The licensing model means operators have to be competent enough to hit the ground running with their Don Cherry’s Sports Grill location from the first day, which also helps ensure that each location provides guests with the best possible experience. “You have to be a good operator to begin with, and then we give you the tools to streamline your operations,” Painter says.

On the Menu
One of the ways in which Don Cherry’s Sports Grill helps its operators streamline their restaurants is by providing the backbone of the menu for each location, then giving the operators the autonomy to customize it with local favorites. Painter says about 80 percent of the menu at Don Cherry’s Sports Grill is common among all of its locations, with the remaining 20 percent determined by the individual operators to reflect local tastes and tendencies. The company brings its operators together once a year to present different food items to be introduced to the menu and the ones that are picked have been voted on as the new favorite. Painter says its corporate chef is always ready to receive and test successful items that have been field tested in the stores within their marketplaces.

Giving an operator the power to determine a distinct portion of the menus for their store has helped Don Cherry’s Sports Grill keep up with one of the most prevalent trends in the casual-dining sector right now, one that has tripped up other chains. “The biggest change that the industry has actually faced is a trend to go with more local fare,” Painter says, adding that the autonomy also helps operators stay in front of trends like the rise of gluten-free options.

Playing to Win
With the 2015 menu coming soon, Painter says Don Cherry’s Sports Grill and its operators are poised to continue on their path of success. He says the company knows the secret to winning is to develop a solid game plan but trust the individual players to make the right plays when the opportunity arises. Even though the company has the name recognition of Don Cherry, Painter says it’s the experience of its operators that makes Don Cherry’s Sports Grill a success.

“You have to be a good restaurateur to get them to keep coming in,” Painter says.