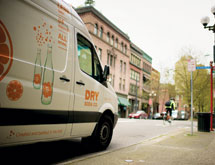 It is a rare thing to find a delicious beverage that also promotes the good health of the consumer. But that is exactly the rare combination DRY Soda Co. offers, CEO Sharelle Klaus says.

Based in Seattle, the company manufactures sodas that are made from all-natural ingredients and a low level of cane sugar. Klaus began developing DRY Soda in 2005, by drawing inspiration from her own personal experiences.

“I wanted to create a product that I could drink when I was pregnant,” she recalls. Before giving birth to her children, Klaus ate her meals without the complement of a paired beverage since her options – tea, club soda and sugary drinks – overwhelmed the taste of her meals.

In addition, Klaus wanted a beverage that was better for her health than the usual beverage choices. After spending months developing products in her own home kitchen, she launched the company’s first four flavors: lavender, kumquat, lemongrass and rhubarb.

New Directions
Since its start seven years ago, DRY Soda has evolved substantially. While the company initially sold its products to white tablecloth restaurants, it has expanded into retail distribution, with its products carried by supermarket chains like Kroger, Safeway, Whole Foods, Wegmans and Earthfare.

DRY Soda also has partnered with clothes retailer Urban Outfitters, which will sell its products in refrigerated cases at its flagship stores. “That’s a fabulous partnership we’re really excited about,” Klaus says. “We think Urban is a really great brand.”

DRY Soda also has nationwide distribution, including Canada. “We have a pretty strong presence [there because] we have good distributors,” Klaus says.

DRY Soda also has changed the look of its product, Klaus says. While the company initially sold bottled drinks with labels that were painted on, its new pressure-sensitive labels give the consumer far more information, such as a list of ingredients and calorie count.

The company also has created new flavors, due to consumer demands. “What it has become is really what our customers have wanted it to become,” she says, explaining that many wanted to use DRY Soda products for cocktails, or to drink every day.

“We’ve really listened to what the customers were [demanding],” Klaus says.

Changing Fields
Before starting DRY Soda, Klaus explains that she did not have any experience in the beverage industry. “I had been a consultant with Price Waterhouse and an Internet company,” she recalls, adding that she had a rocky transition to the industry.

“Beverages is obviously a fairly challenging industry,” she says, noting that there were many areas that she immediately excelled at and others she had to learn. “It’s been pretty 50-50 for me.”

In the last year, she adds, DRY Soda has enjoyed a surge of success. “We did grow over 110 percent last year,” she reports, adding that a large factor in this was change in its packaging, which has opened it up to more retailers.

As the country has emerged from the recession, DRY Soda landed much-needed financing. At one point, DRY Soda cut back 90 percent on its sales and marketing expenses in 2008.

“We continued to grow, but at a slower rate,” she says. “[Through financing,] we were able to get investors interested again. We were able to hire and put some new marketing campaigns in place.”

Creating a New Category
To this day, DRY Soda still finds obtaining distribution to be challenging, Klaus admits. But she asserts that the company is growing strongly in all of its channels – natural, traditional and restaurants (on-premise).

DRY Soda is attractive to the health-conscious, but Klaus doesn’t think it will be limited to that demographic. “More and more people are beginning to understand the effects of high fructose corn syrup on their health,” she says. “They’re looking at DRY now especially with the more mainstream flavors that we bring to the table.”