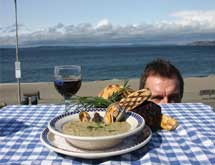 Duke Moscrip knows the restaurant that bears his name isn’t the hippest or trendiest place in the Seattle area, and that’s perfectly fine with him.

Duke’s Chowder House – with six locations in Seattle, Tacoma and Kent, Wash. – doesn’t want to be the most expensive or upscale restaurant in town, but it does want to be the best, says Moscrip, founder, owner and CEO.

“It’s unpretentious and not stuffy,” Moscrip says. “People will not come out of our place thinking there was someone full of themselves working there. We’re not about impressing people with how cool we are. We’re about giving them the best service and impressing them with our tasty food.”

Moscrip believes in not skimping on the quality of his dishes, serving only fresh Alaskan salmon as opposed to farm-raised, as well as high-quality hamburgers made from natural beef raised at Meyer Ranch in Montana.

Moscrip and a former chef at Duke’s Bar & Grill – the predecessor to Duke’s Chowder House – adapted Moscrip’s grandfather’s recipe for clam chowder. The chowder, which Moscrip says includes a heavy whipping cream and “lots of herbs,” won Seattle’s first, second and third annual Chowder Cook-Off contests. “After the third time, they asked us not to compete, and gave us a special award and asked us to judge instead,” Moscrip says.

The restaurant is now offering its chowder on Costco.com, Amazon.com and Amazon Fresh with plans to sell in Costco stores, as well.

Moscrip, a former stockbroker, started his career in the restaurant business full-time in 1972 after he took over operations of Ray’s Boathouse, a restaurant he invested in.

Four years later, he opened Duke’s Bar and Grill, which reflected his interpretation of what a great bar and grill should be as well as inspiration from several similar establishments he’d visited across the country.

“When we opened, I basically violated a lot of rules as to how you’re supposed to do things,” he says. “I paid all my employees in cash, and we didn’t use cash registers – we just had cigar boxes.”

Moscrip’s self-described maverick nature led to the initial idea of serving fine wine by the glass as opposed to a lower-quality boxed wine, he adds.

“We didn’t have a problem with wasting the wine bottles after we opened them because we sold enough of them,” he says. “It just took off like a rocket.”

Moscrip credits a former Japanese bartender with coming up with the idea for the kamikaze in 1977. The drink was served at Duke’s during an annual Pearl Harbor Day theme party.

“We’ve done a lot of things that have shown up in the way people do business now,” he adds.

In 1989, Moscrip had an opportunity to move Duke’s Bar & Grill to a waterfront site, and decided to change its concept. “I saw a hole in the marketplace,” he says. “Most of the places on the waterfront were high-end destination dining. I thought, ‘What if we did something more casual and less expensive?’”

Moscrip and his son John – a partner in the business and its COO – continues to look for opportunities to promote and expand the restaurant.

“Right now, we’re going to wait and see if there’s an opportunity that’s really good before expansion, but ultimately we would like to see 25 to 30 restaurants,” he adds.

Duke’s Chowder House emphasizes service, starting with the training of their servers. The company’s executive chef and director of operations lead a three-day class, which includes a discussion of the company’s culture.

“People leave this training with an idea of who we are and what we cook,” Moscrip says. “The result is dramatic, because it gives us walking salespeople able to sing our tune to all of our guests as opposed to just putting them out there and having them follow another server.”

The training makes servers experts on not only the menu, but also the methodology behind it. “When servers get a question about where our salmon comes from, they are able to have an answer right away,” he adds.

The service, plus Duke’s food and the restaurant’s fun atmosphere, combine for a unique experience for diners.

“We want customers to come away with a special feeling,” Moscrip says. “The food is filled with flavor, which is special to me and special to our employees, and we want people to enjoy it.

Duke’s Chowder House staff and Moscrip himself maintain close ties to the communities where they work.

This year, Moscrip donated $40,000 to Seattle’s long-running and popular Seafair hydroplane race. The idea to donate came to Moscrip after reading a newspaper article about the event losing sponsors and having a $40,000 gap in funding, he says.

“This is just a great example of getting involved and helping out,” Moscrip adds. “I didn’t do it for the publicity. I just realize this was the thing to do in order to save the event, and it came back to us twentyfold.”