Back to Profile Gallery > E. A. Sween Co.

After more than six decades, E.A. Sween wants to change the perception of on-the-go food.

When people travel, they have little time to spare, which makes it important to get food fast. E.A. Sween Co. makes it easy to them to do that with products that are made specifically for people on-the-go, President and CEO Tom H. Sween says.

Based in Eden Prairie, Minn., the company produces sandwiches, wraps, pastries and other items that are distributed across the country via wholesale, direct store delivery and combined distribution centers. Sween’s grandfather, Earl August Sween, started the company in 1955. 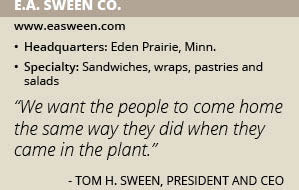 “We’ve been growing at a pretty good rate,” he says, adding that the firm recently acquired a new facility in Annandale, Minn., that will expand on its capabilities. “We’re beyond our capacity here in Eden Prairie. This allows us to not only grow, but produce more of the ‘right’ products to support ongoing changes in consumer trends.”

Extending Life
E.A. Sween invested substantially in evolving its “Food on-the-Go” platform, which enabled it to adapt to consolidation in its client base. “Our history has predominantly been in the convenience store environment,” Sween says.

This environment, he notes, has seen massive consolidation with large retailers acquiring medium-sized chains that were E.A. Sween’s best customers. “What’s been happening is a lot of the bigger chains are getting bigger and the low-volume stores are going out of business,” he says.

E.A. Sween still has the ability to respond to all of its clients’ needs, no matter their size. If a customer has a number of stores in a particular market that experience strong foot traffic, “We’re able to bring frequent deliveries to the stores with the products we offer,” he says.

The company can go to those locations five to seven times a week, with salads, parfaits and other fresh products that have a short shelf-life. E.A. Sween also can help lower-volume stores that require less deliveries and a longer shelf-life.

Recently, the firm invested in packaging that extends shelf-life, as well as healthier products that consumers are looking for. This led to an update of its Deli Express brand, as well as the addition of the Artisan line to its Market Sandwich brand.

The line features products in the new packaging, allowing them to last longer and stores to require less visits from E.A. Sween. “[The goal] is really to try to give the retailer a fresh line that they don’t have to manage at the store level,” Sween says.

Avoiding Errors
Safety is an important area of focus for E.A. Sween, which includes minimizing the amount of incidents in its plants. “We want the people to come home the same way they did when they came in the plant,” Sween says.

The company ensures this through constant training that makes it “clear to people that safety is their responsibility,” Sween states, adding that it also is investing in automation to move workers to more value-added positions on the production floor.

E.A. Sween also focuses on safety from the food side, where “there’s no room for error,” Sween says, adding that it keeps its facilities state-of-the-art. “When we bring our customers in our plant, they go out of their way to say, ‘Wow! The effort you put in for food safety is impressive.’”

Sween sees a strong future for his family’s company. “We are proud to be a food company and we’ve put forward a 2030 goal to be the company most known for changing the perception of food on the go in America,” he says. “We think we’re well positioned to do that with the [experiences] we’ve had [after] 63 years.”