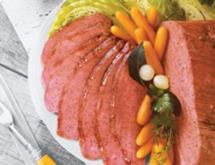 As America’s oldest corned beef specialist – per its tagline, E. W. Grobbel Sons Inc. has had more than a century to perfect its trade. Founded in 1883 by Emil W. Grobbel, the Detroit-based company produces approximately 20 million pounds of corned beef, roast beef and pastrami to foodservice and retail clients across the nation annually, with help from some of the largest food distribution companies in the world. But in order to maintain Grobbel’s leading position, President and CEO Jason Grobbel knows the key to infinite success lies within continuous improvement. “Nothing is stationary in this world,” he notes. “Everything has to keep moving in a growth path and appropriate direction. Today, Grobbel’s is the oldest independently owned specialty meat processor of its kind. Ultimately, our goal is to become the greatest, safest meat processor in the world through stimulating progress while preserving our core values.”

Grobbel’s core values are to live with intensity, integrity and intentionality; to strive for continuous self-improvement; to endeavor to always under-promise and over-deliver; and to work with gratitude for the privilege. “Our core values help keep us on track,” Grobbel explains. “Each one has a story behind it and took many years to craft.”

Four generations of the Grobbel family have played integral roles in the evolution of the company. Emil Grobbel was a young German immigrant who had only been in the United States for one year before he opened a stall in Michigan’s Cadillac Square Market and called himself a “purveyor of fine meats,” offering a variety of items from ham to veal to beef. “It helped that he spoke both English and German so he could help translate for some of the bigger companies in terms of communicating with immigrant associates in the meat business,” Jason Grobbel says.

Before retiring in the early 20th century, Emil Grobbel passed the business down to his three sons, Emil Jr., Cyril and Leo. They continued to sell a variety of meats until 1945, when the company began focusing solely on cured meats. It was in the early 1950s – when Cyril’s son, Cyril Jr., joined the business – that Grobbel developed a reputation for its high-quality corned beef. By 1973, all of Emil’s sons had retired, leaving Cyril Jr. as the remaining principal. With Cyril Grobbel Jr. at the helm, Grobbel’s upgraded its operations and expanded its customer base.

Grobbel’s most significant growth has occurred in the past 20 years, when Jason Grobbel took over as president and CEO. Before his father, Cyril Jr., retired, “It was a traditional company run primarily by family members,” he says. But Jason’s passion for best business practices sent the company in a new direction. “I would say the development of leadership values has been the key thing that has extended that same family feeling to the engagement of nonfamily members to truly become the family that is Grobbel’s,” he states.

A central theme at Grobbel’s is employee engagement, but it takes strong leadership within the organization to execute this effectively, Grobbel says. He, along with his executive management team –Vice President and General Manager Jeff Medinis, Quality Control Director Laura Parvin and Plant Manager Dennis Lipps – are continuously looking for ways to engage employees. “Leadership is something that goes beyond being hospitable to employees, and it’s not something for the timid and weak willed,” Grobbel admits.

“It’s challenging them to create goals for themselves and to make a connection between the decisions they make and the consequences of their decisions. Good decisions equal good consequences, and bad decisions equal bad consequences. People are desperately searching for significance, sometimes in very silly ways. They need help discovering that talent or that passion for what they’re doing, and true leaders help guide that process and keep the person growing and developing.”

Grobbel’s implemented a quarterly productivity bonus program, which helps the management base a team’s productivity performance and track an individual’s engagement score. Managers hold quarterly meetings with individual employees to discuss their engagement score and help them develop personal goals. “When a person begins to develop their own personal goals, they can then see how the goals of the organization and their personal goals reinforce each other, and when they see that, they become naturally engaged in that mission,” Grobbel says.

“When their engagement level falls, we intervene and help them develop a plan of progress. When someone loses focus – as we all do – it’s not about becoming upset or disappointed with them. It’s about sitting down with them and communicating effectively. When we fail is when we are failing in our efforts to confront issues and communicate effectively.”

Grobbel credits the company’s stellar quality assurance program to its employees’ engagement. “You can have the greatest, most modern facility with PhD’s running your quality control, and you can have great procedures and training programs, but if your people aren’t engaged and passionate about what they do, then all measures fall short,” he says. “What you need is all of those factors together, including the fourth ingredient of engagement, to bring it to a whole other level. Then, you’ll have quality control that keeps building and improving every day.”

When employees are engaged and putting forth their best efforts to ensure a company’s operations are running as efficiently as possible, they can then focus their attention on serving the customers. “Since you’re not wrapped up in your own issues, you can put yourself in their shoes and really get a sense for what their needs are,” Grobbel explains. “To be really effective, you need to be proactive when it comes to customer service. You can’t wait for a customer to tell you what they need; you have to get a sense of what they need in the first place.”

Having solid relationships with vendors and suppliers ensures that customers’ needs are met, and much like its quarterly productivity bonus program set up to track employees’ engagement, Grobbel’s has a supplier grading program to track quality. “Because we follow a process of precision, we take perfectionism and flip it upside down and call it ‘precisionism,’ and that means you measure everything,” Grobbel says. “We don’t randomly buy product; we book long-term contracts with particular suppliers and track the quality and incoming quality of their product and grade them accordingly. We give a higher value to those who score higher internally on our supplier grading process.

“Higher value also is awarded to vendors with solutions that uniquely meet processing challenges,” Grobbel continues. “By instilling precision into all our processing steps, Grobbel’s is able to deliver superior quality and value to each customer. One such long-term supplier partner has been Grote Inc. Their gravity feed slicer is uniquely well suited for slicing whole muscle products. In addition, the disposable blades reduce labor required for sharpening, increase RTE sanitation, and deliver accurate slicing.”

Pursuing ‘precision,’ though, doesn’t mean Grobbel’s has forsaken its family traditions, he notes. Grobbel’s still makes corned beef the old fashioned way – an old secret family recipe of hand steeping of the highest quality spices. “When it comes to quality, there can be no shortcuts, which is why Grobbel’s has partnered with Excalibur Seasonings to ensure the most consistent flavor in every spice batch,” Grobbel says.

By engaging its employees, vendors, suppliers and customers, Grobbel’s will continue growing. “We don’t grow for growth’s sake,” Grobbel stresses. “Our mission is not to become the biggest; it’s to become the greatest and the safest. At the heart of our mission – and what Jeff, Dennis, Laura and myself believe in so strongly – is to grow and develop all of the individuals on our team.

“We only take on new business and grow our organization when our people need that new challenge,” he explains. “When they are still in the process of learning and adjusting to the growth of the past, then we know we are not ready to keep pushing for that growth. That doesn’t mean we’re afraid of growth – in five years, I see the company doubling its volume and having a higher percentage of business in the area of foodservice – but through this process, we’re always going to grow.”