Back to Profile Gallery > Earnest Eats 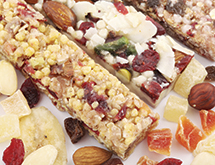 For many years, gluten-free food products didn’t taste very good. It isn’t easy to make certain foods without wheat without detracting from flavor. And for a long time, there wasn’t enough demand from consumers to incentivize food companies to do much about it.

But all that has changed in recent years. More and more people are going gluten-free, or at least cutting back. And there has been enormous improvement in taste as companies experiment with wheat substitutes.

California-based natural food company Earnest Eats is the latest on the bandwagon with its newest offering, Superfood Blueberry Chia, a gluten free-certified cereal that comes in single-serving cups and bulk 15-pound bags. This twist on oatmeal takes three to four minutes to make when mixed with boiling water and covered or microwaved. The flavor consists of a trio of gluten-free grains including whole oats, amaranth and quinoa as well as antioxidant-rich blueberries and chia seeds.

“Gluten-free shouldn’t be punishment,” Co-Owner Andrew Aussie stresses. “So we thought, how can we solve the taste issue for this food sensitivity?”

Founded in 2006, Earnest Eats has long offered wheat-free products – many people with gluten sensitivities are still able to tolerate oats – as well as non-GMO and vegan options. So it was just a matter of time before the company launched a gluten-free product.

What’s more, Earnest Eats is catering to foodservice customers with its entire portfolio of cereals and food bars. “We’re the first natural brand to work with the food-service industry,” Aussie says. “Most of our competitors stick to natural food stores, and that’s great. But so much of the population is trying to find healthier grab-and-go options from food service.”

Gluten-Free Growth
The gluten-free food trend may be more than just the latest diet craze. Gluten-free eating – in and out of the home – is big and growing fast.

Only about 1 percent of the population has celiac disease, an autoimmune disorder of the small intestine caused by a reaction to gluten. About 6 percent of the population is gluten intolerant, which is less severe than celiac disease. However, a growing number of people have neither of these diagnoses but report broader issues related to consuming gluten, such as joint pain, fatigue and bloating. Reducing gluten is also a way to lose weight.

According to the New York Times, more than a quarter of Americans are cutting down on gluten or eliminating it. Some researchers predict the gluten-free product market could hit $15.6 billion by 2016. The Food and Drug Administration recently passed new labeling rules for gluten-free products.

Even the last bastion of gluten-y goodness – Italian restaurants – are finding ways to eschew the protein found in wheat that gives dough its elasticity. The idea of gluten-free pasta was once anathema to top Italian chefs, but now, in many of the finest and most expensive Italian restaurants in the country, including New York City’s Del Posto, diners can find gluten-free pastas on the menus.

Meeting Customer Needs
“I’ve always been crazy about food,” Aussie says. He worked in marketing at Kashi Company for 11 years. Founded in 1984, Kashi was a pioneer in natural food, experimenting with different whole grains and seeds to create nutritious breakfast items. It is perhaps best known for its cereals but it also makes energy bars, crackers and snack foods. Kashi was purchased by Michigan-based Kellogg Company in 2000. Six years later, Aussie took his expertise and branched out on his own with Earnest Eats.

“Gluten-free is part of a larger trend of growing customer demand for healthy menu and snack items,” he says. According to a 2014 National Restaurant Association study, 71 percent of adults are trying to eat healthier at restaurants than they did two years ago.

Earnest Eats’ food-service customers include Caribou Coffee, about 1,000 independent and regional-chain coffee houses, resorts and hotels, hospitals and corporate cafeterias. Customers of these businesses can order Earnest Eats bulk products off the menu or purchase its grab-and-go items.

“I don’t think other food companies like ours realize how much demand there is for these kinds of products in food service,” Aussie says.

Along with its natural food competitors, Earnest Eats also sells its products in traditional grocery stores, such as Whole Foods and Wegmans, as well as independent natural food stores.

“We’re sticking to breakfast and snacks, but we’ll be building out our product lines,” Aussie says. “We’re on the leading edge from a nutritional standpoint and also from a culinary standpoint.”