Back to Profile Gallery > Eddie Merlot’s 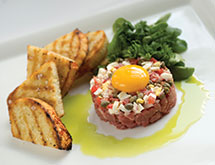 The traditional steakhouse is one of the cornerstones of the American restaurant industry, but until recently its image had remained somewhat mired in the past as the nation changed around it. Bill Humphries, a long-time veteran of the restaurant business, sought to update the steakhouse concept to cater to the nation’s changing demographics. The result was Eddie Merlot’s, a chain of steakhouses that honors the tradition of the steakhouse while breathing some new life into it for a more diverse clientele.

Humphries, who was the first franchisee for Subway in Indiana and served for 20 years on the sandwich chain’s board of directors, says he began to pay close attention to the steakhouse market while doing research for Subway. He says he saw an opportunity for a different style of concept because overall steakhouses were focused on serving the same demographic they had back in the 1950s and 1960s. “Back in the 1990s, the steakhouses were very clubby, with lots of cigar smoking,” Humphries says.

When Humphries created the model for Eddie Merlot’s, he did so with three key customer groups in mind – customer groups that he felt were underserved by the fine dining steakhouse segment. The first was the baby boomer generation, which Humphries says wants to use restaurants to entertain.

The second important demographic Eddie Merlot’s was created to embrace was women, and specifically women in business. Humphries says Eddie Merlot’s locations have been designed with décor that is more attractive to women, with a menu that makes room for lighter options like seafood and smaller portions. Humphries says that today, women account for nearly 60 percent of the entertaining clientele at Eddie Merlot’s. The third group Humphries had in mind when creating Eddie Merlot’s was 30-somethings, which he says trends toward looking for a date night experience.

Humphries describes the look of Eddie Merlot’s as “very contemporary,” with a lot of copper and stained colored glass. “We use a lot of lighting that attracts the eye,” he says, adding that the restaurants also feature fine china with contemporary designs.

Classic and Modern
Eddie Merlot’s was created to appeal to the traditional steak lover as well as a broader selection of customers, and the menu certainly reflects that. Not only does Eddie Merlot’s feature USDA Prime steaks aged for at least 21 days and hand selected and hand cut in its own butcher shop, but it also features a diverse selection of chef’s creations and seafood.

Eddie Merlot’s also features a lounge menu that offers a selection of more casual fare and small plates for sharing. Humphries says this menu is completely different from the main dinner menu, giving guests more than one option for their experience. Among the offerings on the lounge menu are Wagyu hamburgers and a half pound hot dog made with beef from the Australian ranch of golf legend Greg Norman. “We have to have our typical steakhouse menu, but we also have more creative items,” he says.

Continuous Growth
Eddie Merlot’s continues to grow in the Midwest and has started to move outside the region into new territories. The company recently opened a new location in Pittsburgh, and Humphries says another new restaurant is under construction in Denver. Following the opening of that location, the company has plans to open restaurants in Arizona and Virginia.

Thanks to its welcoming atmosphere and focus on a diverse, high-quality menu, Eddie Merlot’s is poised to open an additional three or four restaurants in the coming years, and Humphries expects that trend to continue. “Our current strategy is focusing on growth,” he says.