Back to Profile Gallery > Elevation Burger 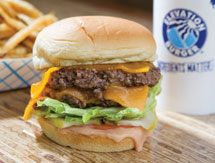 Elevation Burger founder Hans Hess had a real beef with the fast food industry back in 1999. After moving from California, Hess says that the market didn’t have a whole lot of fast and healthful options. “I just wanted something I could feel comfortable feeding to my kids,” Hess says. “I couldn’t find an all-American meal in a health-friendly format.”

So he decided to do something about it himself. In 2002, Hess began formulating the concept currently known as the Elevation Burger. “I ate a lot of organic foods,” he claims. He adds that he definitely wanted to incorporate those into the menu to provide a more healthful alternative to the fast-food choices he saw in the marketplace.

The first Elevation Burger store opened in 2005. Since 2008, the restaurant became a franchise concept. With 30 stores currently open, there are close to 200 stores in development through its franchisees.

“There is definitely a trend among consumers to eat more healthful foods,” Hess notes. “The organic foods segment has grown significantly.”

Better Beef
One of the biggest differences in the Elevation Burger is the type of beef. “We use 100 percent grass-fed, organic beef that’s ground on-site,” Hess boasts. He attests that not only is the beef in Elevation Burgers leaner than most commercially raised beef, it contains more vitamins and Omega-3 fatty acids, yet fewer calories. One big health benefit is the cows are fed grass rather than grain.

“On many commercial feed lots, cows are fed corn which can make them sick,” Hess notes. “Then they’re given antibiotics to counteract their weakened immune systems.” He adds that grain-fed cows gain weight more quickly, which adds to the saturated fat content of this beef.

The free-range beef used for Elevation Burgers is free of pesticides and other chemicals. “It tastes fresher, more natural and less homogeneous than a conventional beef product,” the company claims.

Yet it’s not just the beef that gives Elevation Burgers their flavor. The burgers are placed on a potato roll that gives “a nice, friendly flavor profile,” Hess says. “The roll complements the meat without competing with it.”

The “original” Elevation burger consists of two 3.2-ounce beef patties and features aged cheddar cheese, pickles, lettuce, tomatoes and Elevation Sauce – a creamy, tomato-based sauce. Other options include ketchup, mustard, mayo, raw onions, caramelized onions, balsamic mustard or hot pepper relish. For an extra charge, diners can add bleu cheese dressing, or recently added items like bacon or sautéed mushrooms. For those watching carb consumption, any burger can be ordered with a lettuce wrap in lieu of the bun.

The Half The Guilt Burger features one beef patty and one vegetarian or veggie burger. The Vertigo Burger can be ordered in versions from three to 10 patties high. Single burgers, grilled cheese and the Elevation Salad round out the entrée offerings.

“The quality of the ingredients was also important to me,” Hess notes. For instance, Elevation Burgers offer a six-month-aged sharp cheddar cheese rather than processed cheese product.

As a side, Elevation Burger serves Fresh Fries – fries that are cooked in 100 percent olive oil that deliver health benefits as well as a unique taste.

A Healthful Place
In addition to offering food that’s good and good for diners, Hess extends his commitment to health awareness in the restaurants themselves.

“We are committed to the use of environmentally sustainable and non-hazardous architectural finishes, equipment, construction and operating practices,” the company says. For instance, LEED certification is pursued for restaurant build-outs, site waste is recycled during construction, energy efficient equipment and lighting is specified in the design, and renewable and recycled building materials are used.

Waste materials from the restaurants’ operations, such as olive oil, is donated for conversion into bio-diesel.

“We want to stand for something in the marketplace,” Hess claims. “We also want to offer our customers a sustainable message.