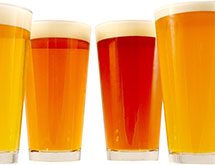 One of the biggest stories of the last decade has been the rise of the craft beer market. Once solely the domain of the hard-core aficionados and dedicated hobbyists, smaller breweries have taken up a much larger portion of the overall beer market in recent years, even taking up space on the shelves at major national retailers and convenience stores. In New York, however, the segment’s growth has not been as robust as it has in the rest of the country, with craft beer only making up about 8 percent of the market. Syracuse, N.Y.-based Empire Brewing Company is working to change that.

The company started out as a collaboration between two college roommates in 1994, brewing their own beers in small batches. By 2007, founder and owner David Katleski took full control of Empire Brewing Company and began pushing it in new directions, including moving toward the use of more locally produced ingredients and even locally produced energy. Four years ago, Empire Brewing Company started to make beer in larger quantities for distribution outside of the Syracuse market, and today the company is in the process of building a new brewery facility to increase capacity and fill both bottles and kegs.

Another significant milestone for Empire Brewing Company was the addition of Brewmaster Tim Butler, who jumped at the chance to work with Katleski after the Syracuse-born Butler met him several years ago. “I’m a proud hometown guy, and at this point in the brewing industry, connecting with your home community is very important,” Butler says.

Keys to Success
Katleski says success in the craft beer industry requires three things: a quality product, a strong brand and an exceptional distribution network. The most important element is the beer itself. “Across the board, we brew successful beers,” Butler says. “We brew crafty beers and we brew some esoteric beers, as well.”

Experimentation is crucial for developing new beer varieties, and Katleski says Empire Brewing Company’s brewpub location in Syracuse gives the company the perfect laboratory for testing out new beers. “Because we have a pub here, we have a very captive audience that can give us feedback immediately,” he says.

The feedback Empire Brewing Company has received in its market has been overwhelmingly positive, and Katleski says that has helped the company build a strong brand over the years. “It’s really been the consumer that’s driven us to a packaged product because of demand,” Katleski says. “I think it’s time to go to the masses with our products.”

Katleski says its long-tenured staff has been the key to the consistently high quality of its beers. “That type of loyalty is very rare in the industry, and it definitely allows us to expand with some credibility,” he says.

More to Come
The growth of craft beer in the New York market has not been as fast as it has in the rest of the country. However, Katleski says, there is good reason to believe that things will change in the coming months, as many East Coast breweries are beginning to realize the untapped potential of the market in New York state. The combination of established breweries moving in to the market and new breweries opening almost every day has created much competition, and Butler says that makes it more difficult for Empire Brewing Company to distinguish itself in the marketplace. “The amount of beer hitting the market is higher than it’s ever been,” he says.

The slow but steady growth of the craft beer segment in New York means there should be lots of room for Empire Brewing Company and its competitors once the state catches up with the rest of the nation. That bodes well for Empire Brewing Company as it starts to make good on its expansion plans for the future. “As long as the marketshare increases along with the competition, then everyone should be fine in terms of survival in the craft beer world,” Katleski says.