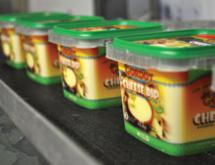 Evergood Fine Foods is one of the strongest sausage companies west of the Rockies, Vice President of Sales and Marketing Don Miller states. Evergood has been family owned and operated since 1926. Located in San Francisco, Evergood has built its reputation on sausage products of superior quality and exceptional flavor, he says. “Up until now, we’ve pretty much been a traditional sausage manufacturer,” Miller says, offering products such as bratwursts, British bangers, knackwurst, garlic sausage, kielbasa, hot links and a number of different frankfurters. “We’ve been successful, and now it’s time to take another step.”

The company recently teamed up with “one of the top chefs in the United States,” according to Miller, to develop new and exotic sausage products for the future. Some of the new products will include pork pineapple and rum, sweet and sour pork, a honey chipotle sausage and jalapeno steak sausage to name a few. “Really, what we want to do is piggyback on our current flavors and product line,” he says. “It is essential that we stay tuned in on consumer trends and needs as it pertains to our industry in the development of new products.”

Also, the company plans to offer more organic, all-natural and family farm products, he says. “A lot of people look into that arena,” he says. “It’s a limited market, but if our competition is doing it, then we have to do it.”

They are also looking at offering a variety of products such as frozen entrees, pre-cooked foods and tailgate items, he adds. “I think it is important to be proactive in the development of new products,” he says. “We’re thinking 10 years down the road. When you roll out a game plan for the future, you have to take it one step at a time.” Some of the company’s newest products over the past few years have received recognition in the industry. In 2006, Evergood introduced a new chipotle product and in 2007, it debuted a pineapple sausage. These items received the “Top Mustard Award” at the National Meat Convention in 2006 and 2007.

A majority of Evergood’s business stems from the retail sector, such as grocery and club stores, Miller says. “We also have a full-line of food service items, which we primarily focus only in the Northern California area,” he says. Those items include smoked sausage, roast beef, corned beef and pastrami.

No matter the sector or product, quality is the company’s No. 1 concern. “We buy the best raw materials possible with no shortcuts,” he says. “We try to be very consistent in what we manufacture.

“Our food safety is top-shelf, as well as consumer quality assurance,” he adds. “We work on that every day to get better. Really, it’s the food safety issues that are the most important.”

He credits Plant Manager Richard Bower for maintaining quality. “[He] and his staff work with the [U.S. Department of Agriculture],” Miller adds. “He has been at the forefront of a specialty programs for the industry and implements that in our factory,” such as the Hazard Analysis & Critical Control Points System. Miller notes that like most businesses, the company has been impacted by the economic conditions. “We’re at the mercy of what we pay for raw materials,” he says. “To stay competitive, we have to be able to buy right.”

But unlike its competitors, value is still a priority. “For example, our retail package is still 16 ounces or one pound when a majority of our competitors have downsized their packages,” he notes.

Sausage maker Jacob Rauscher founded the company in 1926, and Harlan Miller, current owner, and Don’s father, joined the company in the 1950s. His brother Harley Miller is also part of the company and serves as general manager and CFO. “We pride our self on implementing a family atmosphere,” Miller adds. “My dad and my brother arrive here at 5 a.m. every morning. They are very hands on. Customer complaints come to us directly and we’re on it. There are no focus groups or board of directors [to adhere to].The family thing is so important because it’s not just another job; this is our livelihood,” he continues. “We have a certain tradition and standard to uphold within our industry.”