Back to Profile Gallery > Extreme Pizza 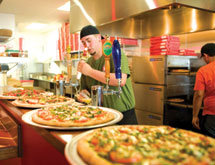 It’s only natural that Todd Parent would be one of the founders of San Francisco-based Extreme Pizza. An avowed fan of outdoor extreme sports such as mountain biking, windsurfing and downhill skiing, Parent worked a few years on Wall Street after graduating from college before he got the urge to start his own business. Parent says he found many of the most successful and satisfied clients he worked with in the financial sector were entrepreneurs.

After getting some advice from friends who had opened their own restaurants, Parent says he was inspired by a San Francisco bagel shop (that was later purchased by Einstein Bagels) that featured outlandish and out-of-the-box topping combinations. He was also impressed with this upstart coffee company called Starbucks that seemed to have an unwavering dedication to its customers. With some formal culinary training under his belt, Parent helped found Extreme Pizza in 1994. Today, the company has franchises in 13 states as well as overseas, and Parent says the company owes its success to its focus on innovation in both its products and company practices, as well as to its over-the-top customer service.

“We’re dedicated to providing our customers with nourishing and healthy food choices with in-store dining, take-out and delivery options,” the company says. “We’re known for our innovative pizza combinations using only the finest ingredients and our philosophy: ‘Extreme. Not mainstream.’”

Sales is an Attitude
Parent believes for any business to stand the test of time it needs to be adaptable to market conditions, stay focused on customer needs and be open to industry innovations. “We don’t want to become stale or stagnant in any of our markets,” he says. Proof to this point, Parent explains that Extreme Pizza originally started in San Francisco as a take-and-bake shop, a concept that has grown in popularity over the years, but in 1994 was relatively unheard of and customers were not buying it. The company listened to its customers and shifted gears to expand its store footprint, install larger ovens to cook pizzas in-store and introduced delivery service.

Even though Extreme Pizza changed up its concept, the company stayed true to its high-quality product, and continues to keep it fresh with “out of the pizza box” ingredients. “We could be your standard pepperoni and cheese shop, but we know our customers in our various markets are looking for something different and we always come through,” Parent says.

To that end, the company recently held an internal competition for employees to develop new seasonal pizzas. Parent says the company’s employees developed nearly a dozen new pizzas that will be considered for addition to the menu.

Additionally, while keeping its flavors current, Extreme Pizza has adapted its recipes for a more health-and-allergy-conscious customer. Along with specialty pizzas featuring heart-healthy toppings and ingredients, the company has added a whole-wheat crust and a gluten-free menu for customers with specific allergies.

Keeping it Fun and Friendly
Parent hopes that when customers walk into an Extreme Pizza with its walls adorned with pictures of extreme athletes and snowboarding benches throughout the store, that customers feel a positive and friendly energy buzzing in the store. Parent says the company will always stay true to its quirky décor and its even quirkier signature pizzas. Like most pizzerias, Extreme Pizza gives customers the option to create their own pizzas from a variety of toppings, along with calzones, sub sandwiches, salads and chicken wings. But true to its name, Extreme Pizza cranks it up a notch with a totally unique menu.

“Many of our signature pizzas not only have unique combinations, but they also have quirky names,” Parent says.

“At Extreme Pizza, we’re always experimenting with new ways to test the palette, to push the pizza experience to a higher level,” the company explains. “And because we’ve received such raving support from our customers and food critics, we have made the sky our limit as to what we can create on our canvas crust.

“This is the sort of pizza invented by people who sail from kites, who snowboarded before there were snowboards, and who learned to always color outside the lines,” the company continues.

Going Places
Parent believes the future of Extreme Pizza looks bright, as the company continues to expand into new markets, including most recently Michigan, Indiana, Idaho, Kentucky and Nebraska. The company also has broken into the international marketplace by franchising restaurants in Ireland and England.

The company says it also is committed to a bright future for the planet, as well. As is befitting the company’s roots in extreme outdoor sports, Extreme Pizza says it supports organizations that work to ensure the planet’s environmental health.

“Extreme Pizza values our environment so we can get outdoors and enjoy life,” the company says. “That is why we endeavor to make a difference by directing conservation initiatives to improve our environment and quality of life in the Extreme Pizza communities. Our goal is to contribute to global sustainability by becoming a world leader and educator in conservation.”

Extreme Pizza says it has no intentions of changing its successful formula, and says it will continue to go to the extreme to bring its customers the most unique pizza experience it can.

With the company’s combination of strengths working for it, Parent says he is confident that as long as the company stays true to its high-quality product and continue to listen to and execute on the needs of its customers, Extreme Pizza will continue to go places – all over the country and beyond.