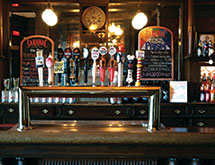 The Matt family has been brewing beer in Utica, N.Y., since 1888. Now in its fourth generation of family ownership and management, the F. X. Matt Brewing Co. is one of the oldest family owned breweries in the United States. “What distinguishes us as a company is this,” Chairman and CEO Nick Matt says. “We’ve been around for a long time and have seen a lot of things happen in this industry. But we’ve also learned and gotten a lot of experience, and as a result of that, we’re making some awfully good beers. For a company our size, the only way you’re going to be successful is if you make great products that people choose because they like them better, and that is what we try to do every day.”

Nick’s nephew, President and COO Fred Matt, emphasizes the company’s innovation. “The reason we’ve survived and thrived for 127 years is that we have been innovative and taken the brewing knowledge and expertise that we have and evolved that into great beers,” Fred stresses. “That’s why we’re around and will continue to be around.”

Brewing and understanding people’s preferences for its new beers has been made easier by Saranac’s installation of a small pilot brewery that can brew two instead of 500 barrels of beer at a time. “This little pilot brewery allows us to do a lot more experimentation,” Nick Matt notes. “Over the years, we’ve had well over 2 million people come to visit our brewery, and today we are able to take experimental beers we’ve done in the pilot brewery and put them on draft in the tour center and see how people like them.”

The result has been some of the High Peaks line of more exotic and higher alcohol beers – such as Tramonay Rouge made with red grapes from the Finger Lakes region of New York – or Scotch Ale aged in whisky barrels imported from Scotland. Nick R. Matt, Nick’s son, joined the family business two years ago as Saranac’s brand and marketing manager. Among his many responsibilities has been getting that message of innovation out on social media and in the company’s cable television advertising.

“We have a story no other craft brewery can tell,” Nick R. points out. “We’ve been through three different tours of craft spawned by three different generations in the last three centuries.” An example of that is Saranac’s Legacy IPA, which is based on a recipe the founder, Nick’s great-grandfather, developed in 1914. “We made some changes to the hopping to bring out some more prominent hop notes but left the malt bill very much the same,” Nick R. Says. “The result is a very drinkable IPA.”

Innovative Marketing
Saranac, which produces 360,000 barrels of beer annually, not only markets its products with cable television commercials, billboards and print ads in beer newspapers and magazines, but it also has its own YouTube channel of videos showing the company’s beers and the unique brewery. The company also has a digital campaign with the slogan, “Pour Your Soul Into It.” “We like the soul reference because after all this time, there is a soul to this place,” Nick R. explains.

Saranac also is on Facebook and Twitter and using Burst Media as a platform that purchases digital ads on thousands of sites that target consumers demographically and geographically. The company also has Club Saranac, an email group that members can join online, and brand ambassadors who volunteer from Club Saranac.

“We reached out and asked who would like to be a part of our 125th anniversary two years ago, and we got a very strong response to that,” Fred says. “We went through a pretty extensive process. The people who are our ambassadors went through some real effort to become our ambassadors. We use them as a brand extension to help spread the word. We recently sent them some of the test beers that were not in the market. They reviewed those beers for us and told us what they thought. They are getting the inside scoop on what we’re doing. What we ask in return is that they share their passion and reach out to people they know and tell them about Saranac.”

Promotions and Events
Saranac holds several events annually to bring excitement to Utica and keep the brand top-of-mind. “Saranac Thursdays are run as kind of a community happy hour in the summer,” Fred says. “It’s really become synonymous with summer. We raise a bunch of money for United Way – $40,000 a year, roughly. Then we have a concert series with bands on tour.”

The Black Crowes, Counting Crows, Moe., Dropkick Murphys, Zappa Plays Zappa and the Dark Star Orchestra are some of the bands that have played outdoors at Saranac.

“Utica tends to be a pass-through vs. a destination for bands,” Fred continues. “They have maybe a day off and they’re headed somewhere else. It’s a way for them to make something that day and pick up overhead costs. So these tend to be during the week, not on a Saturday night.”

“Afterwards, the runners and some other friends show up in our backyard for a little party,” Nick says. “We pour beer after that, and last year, we served 270 kegs of beer. This is quite an event. We get about 40,000 people. It’s a great day in Utica.”

Doing the Right Thing
Among the environmental and sustainable practices at Saranac is the use of geothermal heating and cooling in the warehouse and upgrading the electrical systems and the lighting in the facility for greater efficiency. “Doing the right thing in terms of energy has been a longstanding tradition here,” Nick says. “We’re also very good at the whole recycling concept.”

The brewery recycles 98.7 percent of all components used in production and packaging. “Our spent grains from the processing go to local farmers to use for cow feed,” Nick adds. “Something that would be a real waste disposal issue for us also provides food for the cows and results in them producing more milk. That’s a win-win.”

Another byproduct of the brewing process is the carbon dioxide that beer fermentation produces, which Saranac draws out of the sealed fermenters and stores in pressurized tanks. “We have a system so we don’t need to buy any CO2,” Matt explains. “We can use the CO2 that we capture from the whole process here to treat our beer, as well as doing the carbonation for our soft drinks. It’s another process that we do that is energy-efficient.”