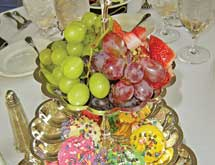 When it comes to meals, people like to have a say in what they eat, and not settle for options forced on them by a limited menu. FAME Food Management Inc. believes in giving customers those choices, President Terry Tehrany says. Based in Wake­field, Mass., the company provides foodservice and food management services to businesses, government agencies, and schools and colleges. A longtime veteran of the food industry, Tehrany founded the company in 1991. He got his start in the industry by getting his degree in food and nutrition at the same time that he worked as a night chef to pay for tuition and books.

Over the years, Tehrany also worked as the vice president of development at DAKA Inc. and held positions at other hospitality firms. It was at one of those firms that he decided to start his own company. As opposed to an environment driven by clients’ needs, “It was a world of mergers and acquisitions, and the word on the street was that the bigger the bottom line you make, the better job security you have,” he recalls.

During a meeting, “The CEO got up and said that the company was looking for 20 percent more on the bottom line every year,” he recalls. “That day was the deciding factor to form FAME Food Management, [since I] did not agree with that philosophy.”

After resigning, Tehrany formed FAME and partnered with longtime colleagues Ian Atherton, an expert in dining service operations, and Louise Faucher, who has expertise in systems and human relations. The new firm placed an emp­hasis on customers’ objectives instead of the bottom line, Tehrany says.

“We respected our clients’ wishes when they had a request or wanted some­thing quickly,” he recalls. “We empowered our managers to make decisions quickly in a friendly and professional manner.”

Today, FAME employs a staff of 300 and enjoyed sales of $20 million in 2009. Tehrany personally makes trips to Washington, D.C., to ensure the company is properly managing such high-profile clients as the Dep­artment of Labor and the Library of Congress.

“I need to not only look at our accounts, but also to make sure that [there is] individual leadership from on-site managers, which is crucial to building FAME’s relationships with the clients,” he explains. “This means less time in the office writing reports to the corporate office and more time to attend to the cus­tomer’s needs and wishes.”

Another factor in FAME’s success, he notes, is its ability to provide clients with many choices rather than standar­dized menus and limited selections.

“We have found that selling food by the ounce has been tremendously successful,” he says. “No longer does the server stand behind a counter and pile your plate with four ounces of meat and vegetables, which may be too little an amount, or too large an amount.”

Instead, customers can walk through FAME’s hot and cold buffets and choose the size of their portions. “Cus­tomers are ecstatic about our service,” Tehrany says. “In some locations, we have doubled and tripled the sales.”

He also praises his partners, Atherton and Faucher. Both “have been instrumental in FAME’s success and growth,” he says.

For instance, Atherton has expertise in financials and operations. When FAME bids on an account, Atherton accurately estimates how much FAME can increase sales and predicts ex­pense costs for the benefit of the client, as well as FAME.

Faucher’s ability to create successful sales proposals is instrumental in the bidding process. Her expertise in union negotiations and human resources has insured a high morale amongst all of FAME’s employees, leading to a low em­ployee turnover.

Healthy eating is a big focus at FAME. It has created a healthy foods menu based on its “Fill Up Not Out” philosophy, “which addresses a very important feature: filling up, with healthy, low-calorie food choices,” Tehrany says. “Filling up so you are satisfied and full, but you are also getting the type of food mix that gives you maximum nutrition, weight and appetite con­trol.”

Looking ahead, Tehrany sees more growth. “We have an account executive on board who will fo­cus and specialize in obtaining new accounts,” he says. “This will ensure FAME’S growth to a higher level.”