Back to Profile Gallery > Famous Famiglia 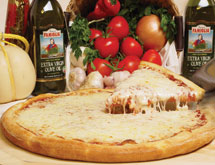 As demonstrated by the regions of Calabria, Napoli or Tuscany in Italy, great countries create great regional cui­sines. In the United States, Executive Vice President Giorgio Kolaj identifies three great traditions of pizza in the United States: California, Chicago and, closest to his heart, New York.

“It’s authentic pizza, the way it was meant to be from Naples – thin crust with nicely cooked tomato sauce and light cheese,” Kolaj maintains. “I think it’s the style people prefer – a lot less bread. There’s plenty of substantive empir­ical data – the Atkins diet, for example – showing bread is not as healthy for you. What I like to brag most about – our competitive differentiator – is our people. It’s almost a cult following the way they perceive the company.”

Kolaj claims to be the only New York City-born pizza chain. “There are others from Long Island, N.Y., but the only one I know start­ed in New York City in the five boroughs was Famous Famiglia Pizza,” he says. “Who bet­ter to deliver authentic New York-style pizza than New York­ers ourselves?”

Worn as a badge of pride and authenticity are the celebrity endorsements of Famous Famiglia pizza, as well as its appearance on the premier episode of NBC’s “Celebrity Apprentice.” Famous Famiglia also has been selected as the official pizza of the New­ York Yankees, Madison Square Gar­den, the Palms Hotel in Las Vegas and Six Flags theme parks across the United States.

A Slice of Home

New Yorkers travel throughout the world, so one of Famous Famiglia’s strategies is to bring a bit of home to them at airports worldwide, such as in Hong Kong, Shang­hai, Mexico City and Cancun. Loca­tions in Canada and Brazil are being re­searched. The company has more than 130 units in 100 locations. Yankee Stadium has six units, and airports in the New York City area have six locations.

Famous Famiglia’s selection as the official pizza at several New York and national locations was won by hard work. “On Man­hattan Island alone, there are hundreds of pizzerias,” Kolaj points out. Those venues selecting their official pizzas were looking for an authentic New York City brand, he explains. Famous Famiglia has won 13 Airport Revenue News (ARN) awards. “Some call ARN your equivalent of the Academy Awards of the airport industry,” Kolaj insists. “We’ve won awards based on brand operation and, first and foremost, customer service. We as human beings have an innate need to be recognized, and if we understand that at the most rudimentary level and leverage that, you have a greater chance of being successful.”

Founded in 1986, Famous Famiglia spent its first 15 years in Manhattan developing its system and recipe before the company ventured out to the rest of the world in 2001. “While we were a very small company with seven or eight locations, we made the in­vestment as a small company – which is not easy to do – in developing our own line of pro­prietary products,” Kolaj points out. “We wanted to make sure if we were going to franchise that, we wanted to safeguard the quality of the product, and ultimately arrive at this connection that the public would have with our brand.

“We have our own full line of award-winning products – cheese, flour blends, tomatoes, pizza sauces, coffee, olive oil – we even ship bottled New York City wa­ter to our locations so we could have an authentic correlation with the quality that we really demand of ourselves,” he continues. “We go directly to the source – we don’t buy from someone we don’t know.”

Besides customer service and quality in­gredients, Kolaj cites the company’s variety of vertical markets for its success. These include airport locations and others in shop­ping centers, stadiums, convention centers, theme parks, casinos and military bases. Fa­mous Famiglia also makes sure to open at least one company-owned location in each of the vertical markets to learn that market first-hand. Additionally, the co­mpany concentrates on the best locations within each vertical segment. “We’re in roughly 30 airport locations in 26 of the leading international airports,” Kolaj notes.

The Kolaj family’s four boys, a daughter and mother landed in New York City 41 years ago. “We came to this country in April 1970 from Frosinone, Italy, south of Rome and Naples,” Kolaj relates. “My father had died seven weeks after I was born. Six weeks later we came to the United States – a widower with four children who didn’t speak a word of English. We had a $280 loan from Catholic Charities, and we settled ourselves in this beautiful country, which accepted us and gave us this opportunity.”

The opportunity was for the brothers to open their pizzeria on New York’s Upper West Side at 96th Street after apprenticing in the business for a combined 30 or 40 years. “My brothers and I have worked every aspect of the business – from dishwasher through ownership – so when you talk about a level of credibility with your fellow employees, that goes a long way,” Kolaj emphasizes.

That sense of family only has stre­ngth­­ened over time and now extends to the company’s 50 franchised units. “Family is central to everything we do,” Kolaj emphasizes. “That’s why we go to any lengths to help somebody be successful.” His brother Paul is CEO, John is COO and Tony is director of quality control. Kolaj researches new locations and then turns the information over to John to obtain the locations. Another brother handles the logistics. “We each bring different capabilities, competencies and methodologies to the table,” Kolaj points out. “When you put us to­gether, we get that much more powerful as a group.”

Famous Famiglia understands that family members help each other out. From its inception, the company has supported local and national charities and donated time to local boards of directors. “My brothers and I sit on a variety of different charities giving our time and lending our name,” Kolaj declares. He is president of the Queens borough council of the New York Boy Scout Councils, for example.

Another board on which members of the Kolaj family sit is the Drug Abuse Resistance Education program. The company also supports the National Italian American Foundation.

“Most of our new franchises when they open donate 100 percent of sales for the first day to a local hospital,” Kolaj continues. “We’re supporting po­lice athletic leagues and public school system programs in New York City. With the public school system, we do­nate a thousand pies a year to local K-6 elementary schools.”

Kolaj believes the aggressive expansion of the Famous Famiglia brand that started in the new millennium will continue unabated. “I see growth and in­creased value in the company and in the brand,” he predicts. “I see expansion into new territories and continued foreign markets.

“I see proliferation of additional vertical markets that we don’t currently penetrate,” he continues. “I see us further expanding within those markets, as well. There is great opportunity for us in the years ahead. I see us helping start a lot of American dreams for a lot of other people. This is just a platform to help others realize their American dreams. Our goal is to open up as many stores as we possibly can.”