Back to Profile Gallery > Fannie May 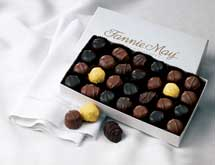 For many chocolate lovers, the Fannie May brand needs no introduction. The national confectioner’s products have been enjoyed by generations of people for 90 years and remain a popular treat today.

Maintaining the quality of the company’s products is of the utmost importance to Bill Rohm, vice president of operations. “Our customers expect quality and the tried-and-true Fannie May recipes,” he says. “Since we’ve been around since the 1920s, some of our customers remember us as children growing up and getting a piece of chocolate from their parents or grandparents. They expect the chocolate to taste just as good now as they remember it tasting growing up.”

Chocolate comes to the plant by tanker in liquid form and then is molded and poured over cream or nut centers, a process known as enrobing. The plant also handles wrapping and boxing for the company’s more than 1,000 SKUs. Fannie May expands its product line annually, with 250 plus new products launched last year.

While many products are distinct mainly in their packaging, the company’s R&D department regularly develops new recipes. “We have a state-of-the-art R&D lab on site, which allows us to develop new recipes and also do testing to ensure we adhere to our high level of quality standards,” Rohm says.

Fannie May’s peak period is from October to February, with its products most in demand during the Christmas holiday season. Holidays such as Valentine’s Day, Mother’s Day and Easter also bring big business.

The lean manufacturing philosophy guides much of the company’s operation. Lean methodologies influence processing, budgeting, quality control and elimination of waste throughout Fannie May, and all employees are regularly trained in its applications.

The seasonality of the business poses many challenges. In July, when the company ramps up production, the number of associates increases from 150 to 400, Rohm says. It is critical for the company to have standard operating procedures in place along with visual management aids to assist with training seasonal employees during this period.

“From a productivity standpoint, we’ve been able to realize an 18 percent improvement in productivity this year because of our lean efforts,” Rohm says. “Lean has really allowed our culture to shift to a continual improvement culture.”

Performance is measured on an hourly basis throughout production, he adds. Rohm credits the lean philosophy with guiding the company through the global recession. “We’re heavily a retail business, and it’s been tough the last few years,” he adds. “Lean has helped us preserve our bottom line.”

Fannie May operates 82 retail stores in addition to its online catalog. The company plans to expand its retail footprint in the next few years with new franchises, Rohm says.

Founded in 1920 in Chicago, the company has been owned by the 1-800-FLOWERS.com family of brands since 2006. The florist and Internet marketer offers flowers, gift baskets, gourmet foods, confections and stuffed animals through online and telephone orders.

Rohm, who joined the company two-and-a-half years ago, says he is most proud of the work of its people. “We have great people here who are very interested in improving and making the best product they can,” he says. “They have a lot of pride in what they make.”