Back to Profile Gallery > Faribault Foods 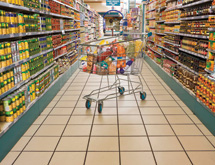 Once found only in small independent stores, today organic food products fill entire aisles at major supermarket chains. As manufacturers and processors scramble to meet the growing demand, Faribault Foods remains a leader in that niche. Executive Vice President Gary Kindseth says this is due in large part to the fact that the company was one of the first to make organic foods a prominent part of its plans.

“The organic [line] goes back to the 1980s,” Kindseth says. “We were probably one of the earliest processors or canners of organic products.”

Based in Minnesota, Faribault Foods has been canning and processing a variety of food products since the 1880s. The company’s main products today include beans, soups, pasta, canned vegetables and beverages. Although in the past the company focused on contract manufacturing for private-label customers, today Faribault Foods has established a number of regional brands of its own and continues to expand that side of its business. Organic products make up less than 15 percent of the company’s total business, according to Kindseth, but that percentage continues to grow as organic sales increase.

Complex Process
As one of the first companies to embrace the organic market, Faribault Foods brings a level of experience and expertise to customers that competitors can’t match, Kindseth says. With the level of detail and diligence that goes into making sure food is certified organic, that experience makes Faribault Foods an attractive partner.

“Not everyone has ventured into it because of the complexity of it,” Kindseth says.

That complexity comes from the higher level of documentation involved in obtaining organic certification. “What you’re doing is certifying that all of your ingredients and all the components of the product are organically grown,” Kindseth says.

This requires a commitment of time, resources and energy that not all manufacturers are able to provide on their own. Faribault Foods, on the other hand, has a full department of people dedicated to sourcing from verified organic suppliers, and its R&D department concentrates on the feasibility of creating a new organic product.

Finding Suppliers
Sourcing organic ingredients is the most challenging aspect of working in the organic food industry, according to Kindseth. Unlike traditional suppliers, organic suppliers are in short supply and face substantial barriers to entry.

“The rule of thumb is, to get into organic products, it’s a three-year process for the grower or the company that you’re dealing with,” Kindseth says.

The scarcity of proper organic suppliers means Faribault Foods has to scuttle plans for new organic soups or other products that involve a lot of ingredients, even though there may be a demand for such an organic product. “People want some products to go organic, and we just don’t have the supply,” Kindseth says.

However, that might be starting to change as organic foods continue to take up more space on grocery store shelves. Even though the economy has forced consumers to be more cost-conscious, organic foods still have a place in many shoppers’ baskets because they want the benefits of food prepared without preservatives, artificial ingredients or pesticides. “The feeling is that the organic products are really more upscale products,” Kindseth says. “They are perceived to be healthier and fresher, so therefore that’s the burden, to make sure you have ample supply.”

Kindseth adds that Faribault Foods foresees even greater growth in the organic sector over the next few years, and that the company’s position as one of the most experienced organic processors and canners will give it a strong position going forward.

“I think organics, as the economy rebounds, will see more continued growth and organics will grow at a greater pace than the regular products,” he says.