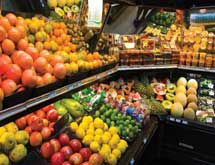 With a year-round population of about 25,000 and a geographic area of only four by two miles, the island of Key West, Fla., is a relatively small community, figuratively and literally. Fausto’s Food Palace has been the community’s grocery store since 1926, which speaks to the strong connection between the two.

Co-owner Alton Weekley – part of the third generation of family ownership – says Fausto’s longevity is due in no small part to the bond it has with its customers.

“The important thing is we get to know our customers, and they get to know us,” Weekley says. “We become more than simply a business-customer relationship – it’s more like a friendship.”

That bond is so strong that, despite the fact that the island has three national chain grocery stores, Fausto’s is the only grocer on the island with two locations. The difference, Weekley says, is that Fausto’s customers receive personal service from the stores, many times going out of its way to find specific items it doesn’t normally stock. “It’s something that doesn’t always happen at a chain store,” Weekley says.

“Those little touches like that are things that people don’t expect,” he says. “It’s that family feel that you don’t get in the modern chain supermarkets.”

Weekley says the store is dedicated to serving more than just their customers, but also the community at large. Fausto’s has been recognized multiple times for its hiring of developmentally disabled people, and was the only independently owned company in Florida honored by the Florida Agency for Persons With Disabilities. The agency serves the needs of developmentally disabled adults throughout the state.

In terms of civic service, Weekley and his brother Jimmy have served on the city commission, and Jimmy Weekley was mayor of Key West from 1999 to 2005.

The store was started by Cuban immigrant Faustino Castillo, who came to the island in 1910 to make cigars. Today, the store patterns itself after well-known New York grocers such as Dean & Deluca, which specialize in upscale items not found in most chain stores. Examples of this can be found in Fausto’s wine and cheese selections, as well as its emphasis on organic foods. Weekley says this has less to do with chasing trends as it does with serving the needs of the store’s customers.

“In some respects, we find we’re ahead of the curve on some things,” Weekley says.

For instance, the store has had to adjust its inventory to accommodate customers’ budgets during the current recession. “Like most businesses in the country, with the recession, we’ve tried to understand that even though our customers want these better products, we’ve had to downsize,” Weekley says, adding that the store has been working to find items of comparable quality at lower price points. Fausto’s customers, much like consumers all over the country, are “downbuying” by choosing less-expensive versions of the items on their shopping lists.

One example of this trend can be found in Fausto’s larger store. That location has an extensive wine department, and Weekley says the average price of a bottle of wine purchased there has slipped from about $20 to about $13 today. This has prompted the store to find more varieties of wine priced in the same range and reduce the number of more expensive wines.

Additionally, Fausto’s has embarked on a marketing campaign aimed at steering customers toward lower-cost private-label products.

Despite the economic issues facing the store, Weekley says Fausto’s looks forward to a bright future. He says the store is always looking for ways to expand its operations.