Back to Profile Gallery > FGF Brands 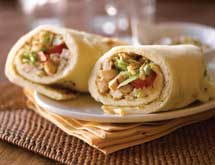 When Ontario-based FGF Brands sets out to make a commercial product that is a foreign food tradition – such as India’s naan or Italy’s focaccia – it goes to great lengths to make sure these items taste as authentic as they do in their country of origin.

“We just want to replicate, on a commercial basis, what people are used to making in their own home,” President Sam Ajmera says. “We try to maintain the authenticity and tradition of the product from the country where it originated.”

In fact, when the company decided to add pizza crusts to its repertoire, FGF Brands literally went to great lengths to ensure it made the best, most authentic product.

“Our corporate chef and I enrolled in a professional pizza-making school certified by the Verace Pizza Napoletana – Italy’s ‘pizza police,’” says Jim White, partner and product developer. “Now we’re certified ‘pizzaiolos’ by the institute that certifies pizza makers in Italy – we even had to work at a pizzeria for a week, making pizzas at night.”

Armed with this experience, White and chef Alison Jarvist returned to Canada and set out to replicate the authenticity. The result is a crust that is made with natural ingredients and stretched by hand. “The pizza crust, which we’ve just launched in the U.S., is as authentic as any pizza you’d get in a Naples pizzeria,” White states.

Although a natural product may have a shorter shelf life, a better-tasting product is always the goal at FGF Brands. White notes that many commercial pizza crusts on supermarket shelves have expiration dates in the range of 60 days with the help of preservatives and hydrogenated oils.

“We want our ingredient labels to read like kitchen cupboard ingredients, not long chemical lists,” Ajmera says.  “Everything we make is all natural, made with things like flour, water, butter, canola oil, salt, pepper and real eggs. We have never used hydrogenated oil at our bakery, even six years ago when it was the industry standard. We never have, never will.”

This is especially evident in FGF’s blueberry muffins, which are made with fresh, wild blueberries. In comparison, White says many muffin producers use synthetic blueberries made with coloring and hydrogenated oil. FGF strives to ensure its products – including flatbreads and sweet goods – aren’t made of empty calories, as are many commercial products.

“We think and act at a higher level,” White says. “We want to make nutrient-dense, healthy products. We want to help keep our customers healthy so they can return tomorrow to buy something else again.”

FGF offers about 300 varieties of muffins, which is its focus in the sweet goods arena. “We make indulgent muffins, small muffins, bite-size muffins and basic muffins,” Ajmera notes.

FGF Brands was formed in 2004, but it didn’t start with an easy product; it chose to produce one that is difficult to make and not well-known in North America. “We decided we would start with the most difficult flatbread from a production standpoint,” Ajmera says.

That flatbread is India’s naan, which requires a special oven and hand stretching. To make the Indian staple, FGF invented the world’s first continuous tandoor oven, which replicates small clay ovens that cooks use in India and are in most Indian restaurants.

“We had to figure out how to adapt the principles of tandoor baking to a commercial enterprise so that we could manufacture more than one naan at a time,” Ajmera explains.

Two months after introducing its Fabulous Flats Tandoori Naan, FGF knew it had a success on its hands; the Indian flatbread was named Best New Food Product in the United States by Prepared Foods magazine.

“Today, we produce a lot of hand-stretched naan,” White notes. “Our Fabulous Flats Tandoori Naan is in just about every supermarket and club store in the United States.”