Back to Profile Gallery > FlavorDoctor Foods 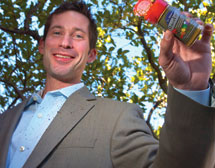 Practically all doctors are concerned about nutrition in one way or another, whether advising patients about the need to cut certain things out of their diet or helping their own families and friends make healthy decisions. A central nutritional concern for most doctors is the prevention of heart disease, particularly through the reduction of high blood pressure.

While most doctors recommend reducing sodium intake as a way to keep blood pressure under control, one physician is taking this theme beyond the exam room and onto the kitchen tables and cabinets of his patients and the public at large. Dr. Chad Rhoden, a busy practicing physician, nutrition expert, recognized media spokesperson and internationally published author of “Bringing Down High Blood Pressure,” decided to offer an alternative to sodium that is not only healthy but worthy of replacing the saltshaker all together. He has co-authored another book coming out this summer, “The FlavorDoctor Diet,” with a foreword by actor Morgan Freeman.

With his father, also a physician and co-founder, and supported by his wife to experiment with various herbs and spices, Rhoden and team developed FlavorDoctor, a salt-free flavor-enhancing seasoning, that Rhoden says, stands out among similar products for one major reason: taste. “FlavorDoctor tastes great and quickly melts into food, like salt, enhancing foods’ natural flavor, and it won’t clump together or overwhelm food, as with other low-sodium seasonings,” he says.

Rhoden introduced the original Flavor¬Doctor blend in restaurants near his home in Jackson, Miss., where the response was overwhelmingly positive among diners and community; Flavor¬Doctor was even called “The Spice of Life” by the local American Heart Association. Now, three varieties of FlavorDoctor are available – Original Blend, Spicy Jalapeno and Zesty Lime. All are available in 1.92-ounce tabletop shakers, individual serving-size packets and 21-ounce commercial-kitchen bottles, as well as in bulk packaging.

Initially, Rhoden offered FlavorDoctor online as well as in local restaurants, delis, gourmet shops, and groceries and has since expanded to large food service distributors, healthcare providers and supermarkets in the Southeast. Flavor¬Doctor Foods has plenty of room to grow; his young company is working to reach national markets including major supermarket chains, hotels, school systems and hospitals. Rhoden cites as an example of growing potential the National Salt Reduction Initiative, a national effort by major food companies including Heinz, Kraft, Subway and Campbell’s Soup to reduce sodium levels in their products.

“With approximately one in four Americans having high blood pressure and the rest of us at risk, there is tremendous opportunity for the restaurant industry to capitalize on the lower salt trend. It stands to reason that if more restaurants use low-sodium options, people would tend to eat out more often because they wouldn’t be violating their own lower-salt efforts,” he notes. “And if the food manufacturers used FlavorDoctor in their products, they too would meet their customers’ demands and exceed any potential government mandate to lower salt, while at the same time keeping their customers happy.”

A Healthy Blend
It combines a number of select herbs and spices, potassium, and other nutrients with demonstrated positive health effects. The delectable portions are proprietary.

“We wanted something that people everywhere would reach for instead of salt, something they’d just keep on the table,” Rhoden says. “It really makes a difference. Unlike other salt substitutes, FlavorDoctor was physician-formulated using the highest-quality herbs and spices, specially blended so it doesn’t dominate the food’s natural flavor.”

FlavorDoctor has a slight salty taste and is finely ground, so it absorbs quickly into food. It can be used as a tabletop shaker or in cooking. “I truly feel that FlavorDoctor gives people a real, easy alternative to help decrease excessive salt intake, and it affords businesses a cost-effective way to reduce sodium while maintaining customer loyalty,” Rhoden explains. “The FlavorDoctor name guarantees always ‘salt-free,’ unlike other companies.”