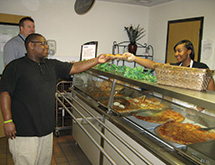 As many new health studies indicate, what people eat can affect their health in big ways. Often, the path to good health is paved with healthy eating. This is the philosophy of Food Management Group (FMG) Inc., which prepares healthy food for hospitals in specialty settings with fewer than 100 beds.

“What most people don’t understand is that a diet order form is the same as a prescription for the pharmacy,” President and Chairman T. David Witten emphasizes. “The importance of fulfilling that diet order is as important as fulfilling that drug order in the healing of a patient.”

If you are what you eat, food can heal patients. “It’s underestimated the power that proper nutrition plays in the role of healing,” new FMG CEO Craig Boudreaux adds. “We all understand that intrinsically, but when you’re really sick, the role of food in the healing process is critical. So the proper balance of nutrition and of proteins and carbohydrates can make or break patient recovery. We believe we can help impact the overall outcome of the patient and how long that patient has to be hospitalized.”

FMG serves 60 facilities in 19 states including the District of Columbia and Alaska. Headquartered in Burgess, Va., the company has regional offices in Pittsburgh, San Francisco, Miami, Richmond, Va., and Alpharetta, Ga.

“Our DNA is specialized hospitals,” Witten says. “We are looking for smaller hospitals that we can bring the quality foodservice of a major corporation to.” Approximately 30 years ago, hospitals specializing in psychiatric, alcohol, drug and physical rehabilitation; acute, rehabilitative and long-term acute care; or assisted and senior living began to be created.

Green Kitchens
In partnership with Landmark Hospital of Athens, Ga., a long-term acute care hospital for ventilator-dependent and complex care patients, FMG developed its first green kitchen. It now has more than 20 and is planning five more.

“A big push for FMG going forward is our green kitchen approach,” Boudreaux declares. “It’s a greaseless, much more healthy approach. We are able to provide very high-quality comfort food in healthcare institutions that doesn’t taste like institutional food and is 30 to 40 percent healthier in many cases than a traditional kitchen approach to foodservice.”

The concept of the green kitchen started when Boudreaux – who has been a client of FMG’s for approximately 28 years and at the time was running a foodservice operation in a specialty hospital – told Witten about his dissatisfaction with his hospital’s current foodservice. The hospital had no in-house kitchen and instead was receiving food catered from larger healthcare facilities that were not meeting Boudreaux’s standards for quality, variety or heat retention.

“We had Craig in mind, and I met a gentleman named Andy Revella, who really worked with the green kitchen,” Witten recalls. Revella became FMG’s executive chef four years ago and subsequently has appeared on the Oprah Winfrey show and several national cooking shows. “He’s well-known, and he’s doing a fantastic job for us with the green kitchen concept,” Witten says. “We were able to take an area in Craig’s hospital that basically was a storeroom and convert it into a kitchen, and we didn’t have to vent the discharged air out of the roof through a vent system, which really gives a couple of additional beauty points.”

The first is saving what Witten estimates to be from $100,000 to $150,000 to install an oven vent. The second is that the product quality is improved and is healthier. The third is that the chance of a grease fire is eliminated. The fourth is that the air that comes out of the oven first is sent through a catalytic converter, so it is cleaner when it is exhausted than when it was drawn into the oven for its convection-style cooking.

“We can cook closer to the mealtime and have fresher food that is hotter and maintains its heat better than with a traditional kitchen concept,” Witten points out. He estimates that each oven can feed approximately 65 patients.

The green kitchen relies on the proprietary design of a Turbo Chef oven that uses a mixture of heated air that is circulated in the oven – induction cooking – and is computer-controlled to prepare each food. Witten and Boudreaux swear the French fries that Chef Revella bakes in the oven taste the same as if they had been deep-fried. The oven cooks steaks, pizza and vegetables and can bake cakes.

“This one oven takes the place of all the cooking equipment normally under a hood system,” Boudreaux insists. Installation of the oven usually costs approximately $60,000, compared with the estimated $200,000 to $250,000 cost to install a standard kitchen, which FMG also operates in many of its foodservice facilities.

FMG has computerized its menu system so the cost and nutritional value can be calculated. “We have built a software program that is really second to none,” Witten maintains. “The beauty of our system is we are able to change a recipe to meet a specific client’s needs.”

Each item in FMG’s recipe file has been tested by the company’s corporate recipe development chef, a taste panel and in actual field units to determine the item’s popularity and any regional variations that are required. The recipe file provides information on ingredients and can specify the exact quantities needed for recipes that will serve from one to 100 patients.

Carving Stations
The quality of foodservice that FMG provides includes carving stations for meat, steak nights, prime rib, salad bars, yogurt and fresh fruit. “If we go visit a client and he indicates he wants to spend $20 a patient day on meals, we can build a program to meet those needs,” Witten insists.

Money can be saved in presentation. Just switching from disposable plates to reusable ones that are washed can save a typical facility $35,000 to $38,000 annually, Witten estimates. He calculates that using a client’s or FMG’s national purchasing organization can reduce food costs by 25 percent.

For the future, Boudreaux foresees expanding the company’s client list to include specialty hospitals with more than 100 beds and doing more work with governmental facilities and in medical malls. For the past year, FMG has been providing all the foodservice in a medical mall located in a refurbished hospital that includes several specialty hospitals and a convenience store that FMG stocks with food.

Witten emphasizes that when clients need to speak to someone at FMG, they can telephone him. That is one reason that FMG has prospered long enough to celebrate its 30th anniversary.

“In the 28 years that I was a client of FMG, I could always pick up the phone and talk to them,” Boudreaux emphasizes. “FMG is second to none in their approach to the client relationship.”