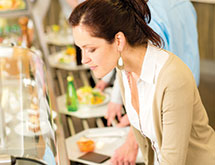 After being founded in 1990, Food Services Inc. (FSI) has found success in the college foodservice business by customizing its offerings to individual campuses. “We tailor more personalized programs for each campus,” President and CEO John Stewart says. “We don’t squeeze customers into a pre-existing plan.”

Large public companies in this sector often have one formula that they repeat for every client, he says. But by creating specific plans for individual campuses, FSI has avoided these pitfalls and grown significantly each year, now serving approximately 30 colleges.

COO Lynn Sonnenberg says FSI has been successful because it has found a niche “providing personal service” to private, medium-sized colleges rather than massive public universities “where you are just a number.”

For example, FSI serves Ave Maria University in southwest Florida. It’s a traditional Roman Catholic campus with an enrollment of fewer than 1,000. Many students there had been home-schooled and are unaccustomed to group student dining, so FSI modifies its program with this in mind.

As the postsecondary foodservice industry is dominated by three to five big corporations, FSI has positioned itself as an alternative to schools looking for something different, Vice President Bob Adamus says. It is also a U.S.-based company unlike some of the majors based abroad in the United Kingdom or France.

“A number of colleges and universities are looking for alternatives,” Adamus says. “We hear quite frequently that they don’t want to be just like the other university so-and-so down the street. They want to have their own unique program and that is something we provide.”

FSI says it offers better service and more custom offerings than the top companies in the field that simply replicate cookie-cutter formulas for each customer.

Special Delivery
“In Florida, 15 percent of those in the dining program at Ave Maria University have special diets,” Sonnenberg says. “Compared to other campuses, that is a high level of specialty diets.”

FSI offers a dedicated vegan and vegetarian line. Its menus are designed to be sensitive to diners with intolerances to wheat, lactose and other substances, and it often has chefs prepare special meals for students.

“Buying locally and sustainably are huge issues these days,” Stewart explains. FSI goes into the fields and meets tomato farmers and others tending the land. It purchases up to 70 percent of its products from within 150 miles of campus. This reduces its carbon footprint in addition to allowing area growers to benefit.

‘Very, Very Competitive’
As one of the top-50 companies in its field, FSI is “very, very competitive,” Stewart says. Its growth strategy has remained stable over the years, and it enjoys many referrals. It mounts robust sales efforts but also is selective with clients to ensure proper fits. It doesn’t currently low-bid for state business, instead preferring to develop partnerships with private schools.

It has also found success reaching out to colleges that operate their own food services and developing plans for them. Given its industry expertise and buying power, it lays out a transition plan addressing all stakeholders with student satisfaction at the forefront.

FSI’s solid organic growth has made it a target for takeover. “Not a week goes by that I don’t receive a mergers and acquisitions call,” Stewart says. “We’ve resisted that.”

Although FSI will contribute modest investments to improve foodservice areas and kitchens, it prefers to rely on the quality of its programs and avoid multimillion-dollar “handcuff” deals, as Stewart calls them.