Back to Profile Gallery > Foods for Athletes – BlackMP

Used by many serious and professional athletes, Foods for Athletes – BlackMP contains the minerals their bodies need for daily replenishment.

As the saying goes, “Never judge a book by its cover,” because you might miss out on something amazing and that is just the case with Foods For Athletes – BlackMP.

BlackMP Living Water is black water because it is enhanced with UDSA certified organic humic and fulvic minerals, SBO probiotics and electrolytes. Co-founders Darren Long and his son, Darren Long Jr., say the color puts some people off at first because it is not what water should look like, but it’s the most refreshing water they have ever had, and the benefits are being called dramatic. 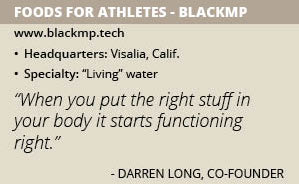 “Humic and fulvic acids are full of trace minerals that we don’t even understand,” Long notes. “We work with scientists and asked them how the product was doing all of this? They called it a miracle product, but it’s not the product it’s your body. When you put the right stuff in your body it starts functioning right. Scientists are calling it the missing link in the food chain or the mother of all molecules.”

Long is a former NFL and USFL tight end as well as a three-time All American. In 1982, he led the nation with the most receptions by a tight end and was second overall in most receptions in a single season. He is a national speaker for athletic programs, corporations and small businesses, as well as the host of “Foods For Athletes,” a health and wellness radio show that airs worldwide. Long also co-hosts the BlackMP Living Water podcast.

“I played football most of my life and at 40 years old I started coming apart,” Long says. “I realized I had to get more nutrients and my son, Darren Jr., and I had to find them. I came down with CTE or severe brain trauma because of the concussions and at the time I didn’t know anything about it. I was battling cancer and my fingers were starting to deform because of arthritis. The thing is, it was a mineral deficiency.”

There are deposits of fulvic and humic acid around the world, and Long and Darren Jr., found a 300-foot-deep deposit that is of the highest quality ever discovered in the U.S. BlackMP’s minerals come from the natural process called humification. Studies show that this process takes place over millions of years. It is a result of fruit trees, seaweed, vegetation and decaying and pressurizing to form complex substances rich in essential minerals, amino acids, electrolytes and other beneficial compounds.

“Most people don’t understand that our bodies are made up of so many minerals,” Long explains. “Three things paramount to the body’s make-up are minerals, bacteria and water, and you have to regularly replace those. Look at your body as a copy machine, you can buy a brand new one, but it will only run for so long until the paper depletes and the ink levels decrease. Look at minerals as your ink – you have to replace those daily.”

Benefits of Minerals
“At one time we got minerals in everything, both in our food and water,” Long says. “When they started bottling water that was our last source of minerals and now it’s gone. Food is the same way. According to USDA and university soil studies, our soils have been depleted of minerals over the years. Few minerals are replaced but not to the level that our bodies need. The USDA study of minerals published back in 1997 even declared there are little to no minerals in the soil. We have to have minerals to live.”

When people are mineral deficient, their bodies will tell them. “The No. 1 sign of mineral depletion is low energy and the second is some kind of pain, which if left un-replenished, could lead to a number of diseases, including things like liver and kidney disease, arthritis, etc.,” Long says. “The federal government says we need 60-plus essential minerals daily. There are up to 40 minerals in our dog food and far fewer minerals in baby food. One thing I know for sure is that nature knows what to produce and our bodies know how to utilize it. We will never truly understand exactly how the body works but if you give your body what it needs, it will respond.”

Foods For Athletes – BlackMP is able to extract the minerals and turn it into a pure liquid concentrate and a powder form. “We think the minerals we use in BlackMP Living Water should last another 100 million years,” Long says. “The minerals never go away and we have a high pH level in our water. When our water was tested, scientists said they have never seen anything like it because the pH level doesn’t drop like it does in most waters. The importance of that is BlackMP Living Water can aid with increasing the alkalinity of the body.

Most alkaline waters use bicarbonate and electricity to manipulate the water and temporarily bring the pH level up. The problem is the alkaline waters do not increase the pH levels in the blood. “You have to get your pH levels up to fight cancer or other diseases,” Long explains. “That’s the secret of this stuff and I’ve introduced it to all my buddies in the NFL because they are all really messed up.”

BlackMP Living Water is endorsed by the NFL Alumni Pro Football Legends Associations because former players were reporting their pains going away and some with cancer are now said to be in remission. BlackMP Living Water is the nation’s leading health and wellness water for the NFL Alumni Pro Football Legends. “There are doctors today saying humic acid is anti-viral, anti-bacterial, anti-tumor, and anti-cancer,” Long notes. “We are just now learning about this stuff. It’s being called a miracle molecule. Humic acid is what causes the water to turn black and has an amazing ability to hold moisture. That moisture is instantly hydrating, cleanses your brain, organs and bones. That’s what this beautiful molecule does.”

Community Outreach
Foods for Athletes – BlackMP’s mission is to improve the health of the human condition. In doing so, the company is on a mission to connect with professional athletes to children in underserved communities. “The water is getting your body back to ground zero or allowing the body to be healthy again,” Long says. “BlackMP is shelf-stable with a highly potent probiotic and humic and fulvic minerals that are so strong that when it comes in contact with the body it gets to work healing and replenishing.”

When Dave August, director of sales and marketing for the NFL Alumni Northern California Chapter, was recently diagnosed with gallbladder and prostate cancer, former NFL player Lorenzo Neal connected him with Long. “He was dying,” Long says. “Neal put him in contact with me and said I had a water he needed to be drinking. I gave him a bunch of water and told him to drink as much as he could. Within three months his color came back and six months later he was in remission.”

Former NFL player and Vice President of the NFL Alumni Northern California chapter, Brian McConnell says he underwent a liver transplant that was not taking well. “He started drinking BlackMP Living Water to alkaline his blood and his liver has now taken,” Long adds. “It was a dramatic turnaround and today he is in great shape. There are only a handful of people in the NFL who have had a liver transplant and survived. It is what spurs the association to endorse us because they have all these athletes that have aged blood cells and acidic bodies that have depleted all these minerals. Our water goes to the cellular level, hydrating athletes and bringing them back to be healthy again.”

Although Foods for Athletes – BlackMP has a number of testimonials from athletes about its water, the company is in discussions with a few universities to perform clinical trials in the future. “As a young company, one of the things we are working on next is establishing clinical trials to legitimize the testimonials,” Long says.

In addition to athletes, Foods for Athletes – BlackMP is joining forces with the city of Oakland and Mayor Libby Schaaf to offer its water as an alternative to sugary drinks for children. In December, the company partnered with local supermarket Gazzali’s to distribute BlackMP to children who waited in line to meet Santa Clause and receive an age-specific gift bag. “We provided nutritional water to inner city kids and it was a huge event,” Long remembers. “More than 2,000 kids showed up and it was phenomenal. Some of these kids waited two to two-and-a-half hours in line to get in.”

Foods for Athletes – BlackMP plans to continue to work with the city of Oakland to get its water into the school lunch program. In March, the company will meet with area superintendents to introduce BlackMP Living Water and promote its healthier alternative to sugary beverages.

BlackMP is also partnering with Athletes for Vets, an organization that gives current and former professional athletes the platform to advocate for service men and women and their families. “When wounded veterans come back, the organization provides assistance with that and we are providing our water to the organization to help improve the human condition,” Long notes. “We also provide our water that is replenishing their bodies on the battlefield.”

Greater Education
Foods For Athletes – BlackMP is a small company of 20 employees with a goal of educating the world on the benefits of the humic and fulvic acids in BlackMP Living Water. Long says it took about a year-and-a-half for him “to get his life together” after he started drinking BlackMP Living Water. “I have cancer, arthritis, CTE, kidney stones – basically everything you can think of,” he adds. “One thing I can tell you for sure, just the energy I got on a daily basis changed my life. I’m almost 60 years old and I can’t say I felt this good when I was 20 years old and in top shape getting ready for the NFL.”

When drinking BlackMP Living Water, Long says some people feel an immediate difference while others may see changes in a week or a year. It all depends on how much mineral depletion is in your body. “Be patient,” he adds. “When people start drinking BlackMP they drink it for the rest of their lives.”

Whole Foods in the Rocky Mountain region and other major retailers recently picked up BlackMP Living Water. “We have two water companies now bottling for us,” Long says. “Brian Kennedy and the team at C&S Wholesale Grocers in Sacramento, Calif., has taken us under their wing and helped us grow. Bill Daniels, owner of United Markets located in Marin County, Calif., has also been a huge supporter and advocate for the benefits of BlackMP Living Water.”

Moving forward, Foods For Athletes – BlackMP will continue to innovate and develop new products that are beneficial for the body. The company is working on developing a spray that will introduce good bacteria, fulvic acids and minerals for different foods like popcorn or cookies, for example, and plans to introduce products as private labels to companies in the near future. Long and his son plan to publish a book that Long says is a “tell all” and will be a must read called “Sick Soil, Sick Food, Sick People.”

“The book will help people really understand what is going on,” he adds. “I want to educate everyone around the world. The proof is in the pudding. We didn’t pay for our endorsements – they are offered to us. The NFL Alumni Pro Football Legends Associations and California USA Wrestling and the National High School Coaches Association gave it to us because this stuff works.”