Back to Profile Gallery > Forsman Farms 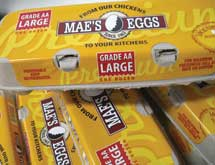 Honoring the past and embracing the future are both part of Forsman Farms’ success. The Howard Lake, Minn.-based farm, in its fourth generation of family ownership, has doubled its business since 1998 through constantly seeking opportunities for growth. CFO and co-owner Peter Forsman, who runs the business along with his brother David and father, Gary, says the staff takes a hands-on, energetic approach to producing, inspecting and shipping the farm’s main product: eggs.

Forsman’s egg operation sits on an 80-acre home farm, where the Forsman family also grows and harvests corn and soybeans for chicken feed. Eggs are taken from chickens onto conveyors into the farm’s egg-processing facility, where they are washed, inspected and graded using state-of-the art dirt and crack detection systems. The eggs then are separated on the grading machine based on their size and weight and placed into cartons or flats, per customer requirements. The product then is placed into boxes with an automated box erector and prepared for shipping.

While Forsman Farms does big business in its region, it regularly ships eggs to customers on the West Coast, including California and Washington. The company’s customer base includes both distributors and direct retail.

Forsman Farms has not been immune to the impact of the national recession; however, Peter Forsman says he’s seen only a slight reduction in sales. Most of the hit has come from restaurants buying fewer eggs and stretching out their inventories by placing fewer regular orders. The company’s retail business has remained strong, and in recent weeks, restaurant business has improved, he adds.

The company also markets its own private label brand, Mae’s Eggs, named after Gary Forsman’s mother, Mae. Mae’s Eggs come in jumbo, large, extra large, large 18 and medium sizes, and are sold with the slogan, “From Our Chickens to Your Kitchens.”

Keeping Up With Changes

Peter Forsman says Forsman Farms’ relatively young staff and leadership give it the ability to help stay abreast of the latest developments in technology and media. “As we switch from a commodity-based industry to a consumer-based product, I think we’re in a good position to make that transition,” he says.

Forsman says many consumers demand more transparency from egg producers as to where the eggs come from, how they’re produced and their oft-debated health benefits. “In a balanced diet, eggs are one of the best sources of protein out there,” Forsman says.

The company is embracing the use of social networking and new media to spread the word about its operations. “People really want to hear what the farmer has to say, not some corporate spin,” he adds. “People want to hear directly from farmers and the people who do this for a living.”

One of the company’s challenges is a growing demand for organic food products, which Forsman says can be expensive for producers to meet. “We have to continually reach out to what the consumer wants and provide a safe food for them,” he adds.

Eggs are inspected by the company’s internal safety department daily, and the Forsman family itself regularly takes a look at the product.

“While my title is CFO, I’m heavily involved in every aspect here,” Peter Forsman says.

“We are open to new ideas; we try to continuously improve by listening to our employees and customers,” he adds. “We like to be open-minded on the approaches we’re taking.”