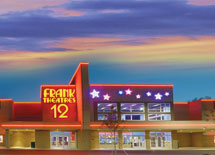 If you think texting by a fellow guest in a movie theater is distracting, imagine how annoying it is listening to clattering knives on china as he or she cuts into a filet. This is not the Frank Entertainment experience.

“I personally am not a fan of somebody having dinner next to me when I’m watching a movie,” Frank Entertainment Co. President and CEO Bruce Frank remarks. “I’m still a popcorn guy. It hasn’t been something I choose to do, but there are companies out there that are doing the movie taverns. That has become popular in markets where there are a lot of college kids or families.”

Frank Entertainment differs with these companies in where food should be consumed.

“We love the idea of food being available at the same facility, but we do it through our Cine Grille, which is to have a restaurant within the facility,” Frank explains. “We’d much rather have a lounge and do small plates or tapas, or have a restaurant that is full-service casual American dining. That’s our focus right now.”

This does not mean that Frank Theatres guests go hungry while watching movies. The company offers wine and beer to guests 21 and over with a wide selection of small bites, such as pretzels, popcorn, cotton candy, coffee, cappuccinos, lattes and frozen yogurt. “I’m not looking for you to sit down in the theater and have a steak dinner – that’s not us,” Frank insists. “That doesn’t mean it won’t be successful – it’s [just] not who we are.”

Cine Grille and Bowl combines 12 movie screens – two of which are large-format, IMAX-style screens – with 16 to 24 lanes of bowling and a 125-seat restaurant. The company has 27 theaters in New Jersey, Pennsylvania, West Virginia, North Carolina, South Carolina, Georgia and Florida.

“We want to be sensitive to each market, to the food that’s sold there,” Frank says. “Some will be martini bars and sushi, some will be barbeque pits, and all the places have coal-fired brick oven pizza. So we’re doing a lot of different things with food and the dining experience at the theater.”

Frank characterizes the cuisine at his facilities as nouveau American. “Our philosophy is whatever we put in there, it has to be the best,” Frank emphasizes. “We’re trying to keep coming up with ideas, and the nice part is – not being corporate – to hear everybody’s ideas and take a shot, and trying them is a huge advantage.”

Dream, Dream, Dream
Where does Frank Entertainment get its ideas? “I don’t sleep a lot – I dream a lot,” Frank jokes. “That is both funny and true. I think we are trendsetters – when we did a stadium theater in 1986, others weren’t building them. How do we do it? I watch what people do – it’s observation. It’s thinking a little bit ahead. It’s not out of the box or in the box – it’s watching what people do, what people need, and they need to recreate. You just have to listen to people, listen to what they want to do.”

Frank’s management philosophy is to be open to ideas from any employee. “I guess it’s listening to everybody’s ideas,” he stresses. “I don’t discount anybody’s opinion. We have a nice home office of about 20 people, and we all listen to each other. Nobody’s ideas are ridiculous – everybody’s idea has merit.”

To manage his geographically far-flung empire, he delegates authority to regional managers, who supervise up to 10 locations. “They do have an autonomy – if I put them in that position of authority, I have to trust that they will do what’s best for the company,” Frank stresses. “So we use centralized management for corporate decisions, but decentralized and regional decisions can be made by a divisional manager.

Bowling Them Over
People can sit at home and watch television over TV dinners, but they always crave out-of-home experiences, Frank insists. “I can combine the entertainment and recreation, I can find a way to make that an added value for the guests,” he points out. “It’s still cheaper to go to the movies than do anything else for an out-of-home experience.”

Frank is combining dining and bowling because of its retro popularity. “Bowling is the fastest-growing sport in the U.S.,” he maintains.

Industry Icon
Samuel Frank founded the family owned and managed business in 1906 in Philadelphia and New Jersey with nickelodeons. His son Al – Frank’s father – eventually took over the business and brought Frank along. “I’ve been working in the theaters since I was five years old,” Frank remembers.

In 2004, the company expanded to Florida. It now operates in eight states and has signed to do projects in two additional states. The company is unusual in that it owns most of its locations – even the land the old drive-in was on is still family owned.

For mentors, Frank lists his father. “He was my great mentor – he was just a wonderfully brilliant, tremendously theatrical, brilliant marketer, and a savvy, conservative, low-key businessman,” Frank says. “He was awesome.”