Fresh Thyme Farmers Market has grown its reach to 10 states in only six years.

Now is a good time for Fresh Thyme Farmers Market to be in business, CEO Chris Sherrell says. Consumers are not only looking for convenience and affordable prices in their grocery shopping, but they are also seeking out healthy foods.

“People are caring what they are putting in their bodies right now,” he says, noting that the market is seeing a surge of players. “Even though this has been as competitive as it has ever been, we’re seeing fantastic results and having a blast doing it.”

Based in Downers Grove, Ill., Fresh Thyme operates 66 grocery stores that sell healthy, fresh and organic foods in the Midwest. “We’re a natural, organic specialty store and we bring alternative solutions and health awareness to the masses at affordable prices,” Sherrell declares. 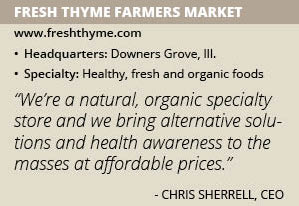 He founded the company in 2012, after serving as the president and CEO of Sunflower Farmers Market. “I was going to go out and start something new,” Sherrell recalls. He initially operated the company in an office above his friend’s motorcycle shop.

In the last six years, Fresh Thyme grew to operate stores in 10 states under Sherrell’s leadership. Each Fresh Thyme location, he notes, spans 30,000 square feet and is designed to be appealing and non-intimidating to customers.

“You can see the entire store when you walk in, [which is] very welcoming,” Sherrell says. “[Customers aren’t] getting caught up in the big maze of national retailers.”

The departments in Fresh Thyme’s locations have evolved over the past six years, Sherrell says. After opening its first store, “We added pizza bars, sandwich bars and salad bars,” he recalls.

“We’re continuing to evolve in that sense,” he says, noting that the locations recently added juice bars offering smoothies and wheatgrass shots.

Outstanding Additions
Sherrell has sought to create a unique company culture at Fresh Thyme. Its locations focus on being profitable, but they also operate with the philosophy of taking care of employees, who in turn “will take care of your customers,” he explains.

This reflects the philosophy that many of Fresh Thyme’s associates encountered in their previous careers. “We want to create that same culture and dynamic that we were all offered throughout our lives, getting to the positions we’re at today,” Sherrell says.

“We certainly want to keep that going and believe that gives back to our customers, who are paying the bills at the end of the day,” he says, noting that the company now employs a staff of 5,000 people.

At first, recruiting employees was challenging for Fresh Thyme, Sherrell admits. “We were a startup and people didn’t know if we’d be around [very long],” he recalls. “Today, it is much easier because of word of mouth and reputation.”

After six years, “We’ve got some great people on board who have made some outstanding additions to the team,” he declares. “It’s becoming much easier to recruit today than it was at the beginning of this venture.”

But turnover in Fresh Thyme’s locations is still an issue. “When you have a huge new store base, your turnover is higher,” he says, adding that the average company tenure is a year-and-a-half. “That’s tough,” Sherrell says, adding that the company needs to focus on better hiring, which will improve turnover. “But we’re satisfied where we are today, minus some of the new stores, which we just need to get better at.”

Secret Sauces
Fresh Thyme is seeing strong competition in its market. As the healthy foods trend has become more popular with players such as Whole Foods Market, “Some of the other, more conventional stores are playing in the natural space more,” Sherrell says.

“They are looking to drive some of their business with fresh produce and meat,” he continues. “That’s challenging when they compete a little bit more in those arenas.”

But the industry also is seeing the entrance of e-commerce players like Amazon, which recently acquired Whole Foods. “Everyone carries grocery now, not just grocery stores,” he says, adding that companies like Peapod also offer home delivery.

But Fresh Thyme’s people help set it apart, as they reflect its company culture. “Everyone’s singing the same tune and taking care of the customers the way that we want to,” he says.

Fresh Thyme’s customer service also sets it apart. “We train them to live the lifestyle,” Sherrell says. “Some of our competitors would really have to really set their minds to change their cultures, [including] how they approach the business from a customer standpoint.”

The company also offers customers a cost advantage. “We’re still the cheapest out there,” Sherrell says. “We pride ourselves on high-quality, natural organic prices at a value. That’s one of our secret sauces from a private label standpoint to an item standpoint.”

Outstanding Initiatives
Fresh Thyme opened 20 stores in 2017 and has another 10 slated for 2018. “We’re going to build 125 to 150 stores within 125 miles of our distribution center,” Sherrell says, adding that this helps keep the company nimble.

Fresh Thyme also plans to continue focusing on profitability. “We have a ton of outstanding initiatives this year,” he says, adding that the company will release a new app and unveil a new website in the 2018.

These will allow Fresh Thyme to begin providing home delivery and e-catering services, as well as offer online ordering. “You’ll be able to preorder stuff in store before your shopping experience,” Sherrell says. “[We also have] all sorts of fun stuff coming in, with huge digital campaigns. We’re also going to try some self checkout [registers].”

Parallel Paths
Fresh Thyme often partners with companies that specialize in healthy products. “We love to be running on a parallel path,” Sherrell says, noting that the company works with start-ups and growing brands, as well as natural organic companies.

These include KeHE Distributors LLC, a specialty, fresh, natural and organic wholesale and food distributor in Naperville, Ill. “They’re a full-service supplier,” he says.

The company has provided Fresh Thyme with bulk vitamins, and dairy and frozen products. “KeHE has been a big part [of our growth] and has a similar vision with their beliefs,” Sherrell says.

He also praises Sherwood Food Distributors, a Detroit-based independent distributor in the meat and food industry. “Both of these companies have been by our side since day one,” he says. “They were very instrumental in helping grow the business to what we have today.” Promoting the Brand Fresh Thyme utilizes a wide marketing campaign that ranges from sending paper and digital flyers each week to utilizing radio advertising every time a new store opens. The company also believes in employing grass root efforts, where it participates in its local communities.

“That’s one of the biggest contributors to our success today,” Sherrell says, noting that Fresh Thyme sponsors T-ball teams and 5K runs, and takes part in non-profit organizations, schools and churches to promote the brand.

“One of our biggest opportunities is to instill awareness,” Sherrell says. “Most likely, it always will be a challenge.”

Fresh Thyme plans to ramp up its digital, social media and web efforts, he notes. “Digital is certainly where it’s going to be,” Sherrell says, noting that the company will ultimately phase out the use of print flyers and circulars. “But we’re not going to see that go away in the next five years.”

Shining Bright
Sherrell is proud of his staff at Fresh Thyme. “We’ve done some amazing stuff in the last three and a half years,” he says. “We’ve successfully opened a grocery store in the Midwest with 66 stores in 10 states, during the most challenging and competitive times in the grocery industry.”

He adds that the stores have achieved high-digit store sales. “I couldn’t be happier with the core group we have today,” Sherrell says.

Fresh Thyme plans to build on that success, while getting stronger. “The future is bright,” Sherrell says, adding that he is excited about the company’s growth potential in 2018.

“We’ve got an outstanding team on board and we’ve still got lot to do,” he says. “There’s so much upside to this business, once we get the right initiatives in place and get the name and the brand out there. It’s a pretty exciting time.”

“They will work with those folks a minimum eight or a maximum 12 weeks with the training manager in-house,” he says. “Nobody even touches their own store before they go through this training.”

Fresh and Flavorful
Fresh Thyme Farmers Market has many different departments in its stores, including its Fresh Fruits & Vegetables department, which it considers the center of its locations. Each one features more than 200 USDA certified items, representing over 50 local farms.

“Every day, we celebrate Mother Nature’s fruitful bounty by sourcing seasonal produce from the local farms, organic items from certified growers and freshly picked, quality fruits and vegetables fresh from the fields,” the company says.

“Our produce buyers build long-standing relationships with our grower partners, negotiate well and buy direct from farms to bring great value fruits and vegetables to our stores,” Fresh Thyme continues. “We’ve made this department the nucleus of our store because we believe it’s at the heart of healthy eating.”

Fresh Thyme’s stores also feature its Fish Markets, which feature a wide assortment daily. “Wild seafood from pure waters is one of our guests’ favorite sources of healthy lean protein, and our seafood specialists are always full of tips to bring out the best flavors when cooking,” the company says.

“Our seafood buyers travel to Alaska to source the best salmon available in addition to searching both coasts to secure sustainable fish options to be delivered to our stores daily,” Fresh Thyme says. “In our stores we marinate, stuff and kabob fish by hand to create fresh, flavorful and delicious options for [the customer’s] healthy dinner.”