Back to Profile Gallery > Fricker’s USA 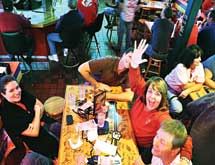 In the current economy, it can be difficult for families to find restaurants that are appropriate for children and allow them to stretch a dollar. But Fricker’s fits that bill, according to Fricker’s Marketing Manager Jim Manley. Based in Miamisburg, Ohio, the company has 18 locations in Ohio, Michigan and Indiana that serve a menu featuring what it lovingly calls “Frickin’ Chicken wings and chunks,” pizza, ribs, salads, soups, shrimp and steak. Owner Ray Frick founded the restaurant in 1985, in West Carrollton, Ohio.

Today, Frick is the sole owner and CEO of the company, which now employs a staff of nearly 1,000 and has annual sales of approximately $35 million, COO Cris D’Andrea reports. He says Fricker’s has found success by providing its customers with an entertaining environment.

For instance, each Fricker’s location features multiple televisions showing sporting events and provides game rooms for children, as well as the extremely popular “35-cent Wing Tuesdays.” To further focus on the value and family friendly atmosphere, Fricker’s welcomes kids 10 and under to eat free all day, every day.

“It’s a very fun, relaxed climate,” he adds. Additionally, Fricker’s has maintained a work environment with employees that believe in its philosophy. “We’ve worked hard to make sure we take care of our guests and our employees to make it an enjoyable place.”

Fricker’s has enjoyed support from its communities, as well. When Fricker’s lost one of its locations in Dayton, Ohio, to a fire created by severe wind storms, D’Andrea needed to stay overnight in the city as he helped it recover.

There were hundreds of homes and businesses without power. When he checked into a local hotel, the establishment let him stay free of charge, while many others offered him the use of their office space, computers and cell phones.

“It was incredible,” he recalls. “It was very rewarding to know that you are part of the community and people care about you.”

Many restaurants have suffered in the recession, but Fricker’s perseveres, due to the value it provides, D’Andrea says. “We continue to grow sales when a lot of companies struggle,” he notes.

Now, Fricker’s is aiming to grow through franchising. While the company currently has three franchise locations, it wants to add more. “We’re look­ing at a number of locations to bring on new partners that want to invest in Fricker’s business and develop not only Ohio, but in the neighboring states of Michigan, Indiana and possibly Kentucky. We’ve grown slowly, but now we’re poised to do it a little more aggressively,” D’Andrea says. “I see us being a strong, vibrant regional chain.”