Back to Profile Gallery > Frontier Enterprises 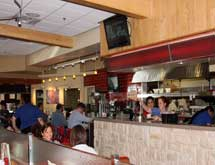 Frontier Enterprises has provided delicious food and exceptional service to hungry Texas families for more than 65 years. It continues to grow and thrive by focusing on quality and staying relevant as the industry evolves. The San Antonio-based company operates two successful restaurant brands – Jim’s Restaurants and Magic Time Machine.

In 1947, Hasslocher started a bicycle rental business in San Antonio’s Breckenridge Park. In the summertime, he sold slices of ice-cold watermelon next to his bike stand, where he met his wife and lifelong business partner, Veva Ball. Together, the couple opened the Frontier Drive-In, which is famous for its burgers, onion rings, milkshakes and carhops. In 1962, the partners opened Jim’s Coffee Shop, which was the predecessor to Jim’s Restaurants.

Classic Americana
Jim’s Restaurants is the quintessential Southern diner. It’s a 24-hour, family oriented venue that offers breakfast, lunch and dinner options at any time of day or night. The restaurant has a broad menu selection ranging from traditional American staples, such as burgers and fries, pancakes and bacon, chicken tenders and apple pie, to Southern favorites like Texas-style omelets, chicken-fried steak and pecan pie. It’s diverse enough to appeal to even the finickiest of eaters, according to Pres¬ident Jimmy Hasslocher, Jim Hass¬locher’s son.

“We go to great lengths through the use of focus groups to introduce new menu items to our customers, and we’ve had a lot of success doing that,” he states. “We do quite a bit with limited-time offerings that our customer base really likes.” These focus groups are comprised of repeat customers registered with the restaurant’s E-club. In return for providing the company with feedback, they are treated to special promotions and free birthday meals.

Ultimately, the customer is going to order what he or she wants, whether it’s a sirloin steak or a Caesar salad, Jimmy Hasslocher acknowledges. But, in recent times, the company has placed a stronger focus on health-conscious options for those seeking healthier lifestyles. It is a proud participant in San Antonio’s ¡Por Vida! (For Life!) restaurant-recognition program, which identifies menu items that meet the nutritional guidelines developed by the Healthy Restaurants Coalition.

Frontier Enterprises operates 20 Jim’s Restaurants, two of which were opened in the past two years, the most recent in May 2011. The company targets new growth areas in San Antonio and will continue to open more restaurants as the market dictates. “Like everybody else in the country, we’re concerned about the national picture, and until we see some improvement, we’re going to sit tight,” Jimmy Hasslocher remarks.

While other restaurants raised their prices to survive the challenging economy, Frontier Enterprises has made a conscious effort to keep its prices low. “People are much more conscious of receiving value for their expenditures,” Division Manager Jeff Morrow says. “We want to make sure that we don’t disappoint them. We put a major focus on the overall experience, making sure the food is excellent, the service is excellent and that the restaurants are as clean as they possibly can be so that customers walk away with a sense of value.”

Division Manager Gary Johnson, who runs the Magic Time Machine restaurants, offers two words to describe the restaurant’s one-of-a-kind theme: funky nostalgia. All of the servers wear costumes of pop culture fixtures and perform as those characters, which in the ’70s included Elvis, John Wayne, Peter Pan and Tony the Tiger. Today, the servers are delighting a new generation of guests as Captain Jack Sparrow, Woody the Sheriff, Dora the Explorer, Ace Ventura and Austin Powers’ Doctor Evil.

“No two meals are ever alike at the Magic Time Machine,” Johnson proclaims. “The entertainment comes from the interaction with the characters, which constantly evolve as pop culture changes. We keep up with whatever the hot movies are and stay ahead of the bell curve.

“Our servers perform a double function,” he adds. “They are entertainers, but they have to be competent servers also. We employ nothing but type-A personalities who can get an order correct and deliver it in a timely fashion.”

For the Long Haul
Longevity is a common theme at both Jim’s Restaurants and Magic Time Machine, which have been around since the 1940s and the 1970s, respectively. “Because we’re a family owned and operated company, we’re able to make adjustments very quickly on anything new that we see going on in the industry,” Jimmy Hasslocher says.

“Our management team is very focused on delivering good food and good service,” he adds.

Frontier Enterprises serves a multitude of repeat customers who grew up eating at the restaurants with their parents and then wound up bringing their own children to enjoy the same experience. “We are very fortunate to have such a loyal customer base, folks that have been dining with us for a long time, and we continue to reach out to new customers and their families,” Hasslocher says. “Being able to maintain our customers means everything to us.”

One of Frontier’s main distinguishing factors, according to Johnson, is the longevity of its staff, which is a remarkable feat in the restaurant business.

“We have cooks and servers that have been with the company for 25 to 30 years,” Johnson explains.

“I think the reason people stay for so long is because of the quality of the ownership of the company. The Hasslocher family is loyal to their employees. They bring them in as part of the family. That’s really a testament to the success of the organization.”