Back to Profile Gallery > Fullei Fresh 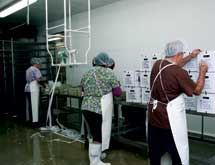 Sprouts are not just for Asian cooking anymore. The healthy and nutritious legume is sprouting up at white-tablecloth restaurants, garnishing foods and sandwiches and serving as a major ingredient in salads.

Those unfamiliar with sprouts often are amazed at the variety of their flavor and textures. No longer the grassy, healthy stuff the uninitiated drown in salad dressing, sprouts can add spice to dishes along with color – for example, deep-red beet sprouts garnish steaks.

“The range and variety of sprouts we do is kind of amazing,” Fullei Fresh owner Manny Wong remarks. “Currently, we do 15 different varieties of sprouts – pretty much a sprout for every need, from mild to spicy. A radish seed is primarily a hot seed – it’s got a nice kick to it. The variety of sprouts that we offer is by far the largest variety in this part of the United States.”

Besides being a key ingredient in a great variety of food, sprouts can be used as garnish. In fact, wheat grass is such a green, attractive and healthy sprout that a patch of it grown like lawn grass in a container can be used as a centerpiece display that suggests healthy, green cuisine.

“Depending on the sprouts that you are eating, most sprouts have a high level of nutritional value versus something that is grown in the field and been there 20 to 21 days before harvesting,” Wong declares. Additionally, the supply and price of sprouts do not vary as much as that of other fresh produce. “Sprouts are very affordable,” Wong adds. “Pricing for sprouts stays the same even if supply and demand changes in the produce market. We have a steady supply year-round, and the cost of the sprouts doesn’t change.”

Drums and Bins
Each sprout requires one seed to germinate and only produces one seed, which the customer eats. So Wong requires a massive quantity of fresh seeds – one for each sprout he produces – which he obtains from farmers who grow them in the ground. Wong estimates the shelf life of his sprouts to be more than 30 days because of the controlled environment in which they are grown.

For other sprouts, the methods are totally different, Wong says. Some are grown in plastic containers on racks, a more traditional method. Others – such as green sprouts, which include alfalfa, clover, broccoli and radish sprouts – are grown in a drum-shaped container, which is a newer technology.

“Basically, what it does is it turns a quarter-turn depending on the type of seed,” Wong says. Depending on the sprout being grown, the time between turns varies from seconds to minutes. The drum also irrigates the seeds and injects air into their micro-atmosphere. Because it is a closed system, it produces a safer and cleaner product over a period of several days.

Food Safety
Food safety is No. 1 for Fullei Fresh. “We are right there in the forefront of food safety,” Wong emphasizes. “We have an in-house lab, so everything that is grown here gets tested here. Every 40-pound batch is tested. A batch is one drum.” Outside monitoring also is used when necessary.

“If you take the proper measures and find a seed that is certified by a farmer, lab-tested and you buy from a broker with documentation, sprouts are just as safe as any vegetable,” Wong maintains. One of his suppliers of mung bean sprout seeds has been in business in China for 38 years. “His job is to go out there and source out farmers to provide the seed for germination,” Wong says. “I rely on him to give me the quality of seed that we need to have.”

Fullei Fresh’s 46,000-square-foot headquarters plant is located in Wong’s hometown of Miami, which has a well that provides a good source of the fresh water that is used extensively in the company’s hydroponic growth of sprouts. His sprouts are distributed by his fleet of eight trucks throughout the southeastern United States, on cruise ships in the Caribbean islands and through distributors in Texas.

“Foodservice is my bread and butter,” Wong says. These clients include white-tablecloth establishments, hotels and cruise lines. “I’ve gotten calls from people seeking our products from as far away as California,” he asserts.