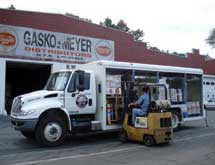 For more than 70 years, Gasko & Meyer Inc., a fourth generation, family owned business has been distributing a variety of fine beverages, including beer, wine, soda, water, juice and tea, to customers in the Hudson Valley, Catskill Region and the Albany and Binghamton areas of New York.

The length of time the Lake Huntington, N.Y.-based company has spent developing relationships with its employees, suppliers and customers is a testament to its commitment to quality and customer service.

Gasko & Meyer started in 1939 when Carl Meyer began to distribute Brooklyn-brewed George Ehrets beer in Sullivan County, N.Y. Shortly after, he started distributing soft drinks such as Pepsi, 7UP and Hires Root Beer. In 1940, Adam Gasko helped Meyer acquire the rights to distribute Schaefer Beer, the No. 1 beer in the 1940s. In 1941, the two partners officially incorporated Gasko & Meyer. In 1950, Gasko sold his share of the company to Meyer, who ran the business with his wife, Loie, and their sons, Cameron and Bruce, for many years.

After Carl and Loie Meyer passed away, Cameron Meyer sold his share to Bruce Meyer and his wife, Dorothy. Throughout the late 1970s and early 1980s, their son-in-law, Jeff Nober, moved up the management chain and was joined in the early 1990s by his wife, Mary Jane. In 2005, Bruce and Dorothy Meyer both passed away, leaving the company to Jeff and Mary Jane Nober. Today, Jeff Nober is president, Mary Jane Nober is secretary and treasurer, and their sons, Bruce and John – who represent the fourth generation of family ownership – are sales manager and operations manager, respectively.

“It’s very rewarding to be a fourth-generation business and to have your sons come into the business and work alongside you,” Jeff Nober says. “I was very fortunate to work with my father-in-law for 20 years before he passed away. When the company first started 70 years ago, we covered two counties – now we cover 21 counties.”

These days, most beer distributors seem to care more about numbers than quality service, Nober points out. It is a common misconception that the size of a beverage distributor’s operation guarantees its success in the industry – personalized service still goes a long way. “We’re small enough to still have somebody there to answer the phone, and the owners are here every day,” he says. At the same time, the company is large enough to operate a highly efficient, 48-hour delivery service that can meet the needs of more than 1,700 clients every week, he adds.

Gasko & Meyer specializes in American craft beers such as Samuel Adams, Magic Hat and Victory; imported beers from more than 15 countries and domestic “cult classic” beers such as Pabst Blue Ribbon, as well as limited release and seasonal brews. “Our salesmen’s knowledge and passion for the craft beers and imports that we sell are really what sets us apart,” Nober notes.

Approximately 70 percent of Gasko & Meyer’s business relates to beer; 29 percent consists of nonalcoholic beverages such as gourmet sodas, chocolate milk drinks, tea and bottled water; and 1 percent is dedicated to imported wine. The company began distributing wine from Australia, France and Italy a little more than 18 months ago and currently has three wine sommeliers to educate customers in high-end wine selection.

“We’re going to restaurants selling our craft beers and imports,” Nober says. “It’s a slow process, but it seems to be working – our sales are gaining every week.”

In fact, Gasko & Meyer’s sales have grown by approximately 5 to 10 percent over the past two years, despite the economy, which “surprisingly has not really affected our business,” Nober says. “More and more people are picking up craft beers, trying them and finding out they are better-tasting beers because they have flavor,” he adds. “That’s why we are focused on selling good, quality-tasting beer.

“There are a couple of craft breweries located on the West Coast that are not available yet on the East Coast, and we would like to have the opportunity to distribute those brands in our territory when they come to New York state,” Nober adds.