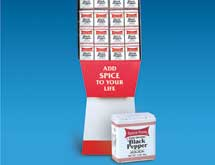 For many, the most important part of food is its taste. People like to savor the tantalizing flavor a meal can leave in our mouths, making us want to have it again and again. Gel Spice Co. LLC is in the business of enhancing that experience, Senior Vice President of Corporate Brands Steve Thomas says. The Bayonne, N.J.-based company sells spices, bakery ingredients and seasonings to food manufacturers and consumers.

“Gel Spice has enjoyed a long history of success in the branded spice category, employing multiple product lines and blends to have an appeal for the consumer, no matter what their seasoning needs are,” Thomas says.

Gel Spice’s history goes back to 1955, when Margaret Engel and her sons, Barry and Andre Engel, founded the company. Although Margaret and Barry Engel since have passed away, the company is still under family management.

Andre Engel is the CEO and is joined in the business by his sons: Vice Presi­dent of Purchasing Gershon Engel, Vice President of Sales Sherman Engel and Vice President of Marketing Jacob Engel. “The company remains 100 percent family owned by the Engel family,” Thomas says.

Gel Spice is a major importer and manufacturer of spice in the United States. “Our most prevalent brands are our Spice Supreme and Spice Time brands, with some new additions to our line with Nature’s Supreme Sea Salts, Salt Supreme and most recently, our all new natural blends of Nature’s Supreme Flavor Mate brand of seasonings,” Thomas says.

Recently, the company has seen growth in the spice category with spice grinders, Thomas says. “As a result, we have developed a number of flavor offerings in spice grinders in both plastic and glass to accommodate the grocery trade and consumers with value grinders, as well as high-quality premium glass grinders,” he states.

Along with having a wide category offering, the company takes pride in delivering its product to market as 100 percent Kosher quality, Thomas says.

To help Gel Spice drive its sales, the company has developed an array of spice shipper offerings from custom made to order spice shippers to black pepper, extract and specialty holiday shippers, Thomas says. “The shippers have significantly increased our sales and helped retailers maintain inventories of key items during peak consumption periods,” he states.

As it has grown, Gel Spice has not let green initiatives pass it by. “For many years, ‘going green’ was the domain of idealistic environmentalists who championed the cause of preserving our planet as a primary goal,” the company states, noting that the sector was often “too preoccupied with generating profit to be concerned with such matters.”

As the idea gained popularity, however, Gel Spice determined green operating techniques were more than just a passing fad.

“The realization set in that the human population’s demands on the ecosystem were simply not sustainable,” Gel Spice says. “People who once dismissed environmental concerns as being counterproductive to economy growth now recognize that productivity and environmental responsibility are not only compatible, they complement one another.”

One person at Gel Spice who has seen the benefits of green has been Andre Engel. “When I was growing up in New York, ecology wasn’t really on the scale of values, and the term ‘carbon footprint’ hadn’t even been coined yet,’” he recalled in a statement.

“Truthfully, when I first heard about going green, I was skeptical,” he continued. “But the more I researched the topic, the more I became convinced that it was the responsible thing to do.”

According to Executive Aron Stahl, Gel Spice was influenced by environmental concerns. “However, our bottom line counts, too,” he admitted. “Our new lighting will pay for itself in a short time.

“Energy bills are now much lower, and we qualified for government incentive and rebates as well,” he added. “On top of that, our warehouse is considerably better lit than it was before.”

Gel Spice says the lighting benefits the environment by reducing the fuel consumption and the emission of greenhouse gases. “Electricity is produced, for the most part, by combustion of fuels, primary coal,” the company says.

“Who would have imagined that we’d increase our sales – by changing a light bulb,” Stahl said.

Thomas notes that the last few years have been challenging and rewarding at Gel Spice. After years of growing its own label, Gel Spice made major strides in expanding into the private label market in recent years. Gel Spice purchased a new 150,000-square-foot distribution center in Bayonne, N.J., to accommodate the continued growth of its branded and private label business.

“However, with a close eye on developments around the world, we at Gel Spice maintain a hands-on approach to our pricing structure across all product lines, enabling us to remain a value leader in the industry,” Thomas says. “As 2010 draws to a close, we look forward to a banner year in 2011, as our branded and private label offerings continue to increase in sales volume and market penetration.”