Back to Profile Gallery > Genghis Grill 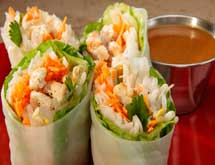 People like to be free to choose what they eat, even when it comes to selecting ingredients. And giving the customers that power has made Genghis Grill’s concept quite appealing, CEO Al Bhakta says. “The customer is in charge of their own destiny” at the chain’s locations, he declares.

Dallas-based Genghis Grill operates 85 Asian stir-fry locations. The restaurants feature open food bars where customers can build their own meals from selections of meats, fish, seasonings, vegetables, sauces, rice, pastas, tortillas and noodles. The bowls are then cooked on a Mongolian grill by the restaurant’s chefs, known as “warriors.”

Today, Genghis Grill is in 20 states and employs more than 2,000 employees in its corporate locations. In addition, Bhakta says, the concept fits well in the Asian food niche, which is currently very strong.

Previously, mom-and-pop restaurants had dominated the Asian segment. “It was really an untapped segment,” he recalls. New restaurants such as Genghis Grill “really catered to where the restaurant industry was going.”

An Appealing Concept
Bhakta has been with Genghis Grill since 2001, when he started as a franchisee. In 2004, he purchased Genghis Grill with his partners in the Chalak Group under the banner Genghis Grill Franchise Concepts LP.

An element of Genghis Grill that appealed to Bhakta is how it caters to nearly every consumer. “It’s a fresh concept,” he says, noting that it puts consumers in control of “their own palates.”

Of course, this approach requires the work of many talented people at Genghis Grill. “It is a growing organization,” Bhakta says. “It takes a lot of time and commitment from a lot of people to make this engine go.”

These include workers at its locations and its senior managers. “It has been a fun ride, and it’s going to continue to be a fun ride,” he predicts.

New Additions
Genghis Grill recently launched several new initiatives, including four new appetizers: its chicken summer rolls, chicken lettuce wraps, chicken and teriyaki pot stickers, and edamame appetizers. “[These are] really the first [appetizers] for our brand,” he says, noting that 90 percent of its locations are carrying them.

So far, “People are loving them,” Marketing Associate Chiara Granado says. “Everyone thinks [they are] a great idea and addition to our menu. The appetizers add more of a fresher twist to our concept. Now people can go into our restaurants having even more options to choose from.”

Because it gives its patrons so much freedom to choose, Genghis Grill works with AVS, a firm based in Dallas, to learn exactly what they think about their experiences in its locations. AVS allows customers to complete an online survey about their dining experiences. They can do it when they return home or immediately, on their smartphones. “It can be done easily as they walk out the door,” he states.

Servers will let the customer know about the survey, where they can also redeem an offer specified on their receipts. So far, more than 33,000 fans have used the survey tool.

“That’s really a big initiative for our company,” Bhakta reports. “We’re able to pinpoint where we’re having any type of issues at the store level, rather than doing [traditional surveys].”

Bhakta calls AVS’s work “a great asset” that extends beyond customer surveys. The consultant also has designed an audit tool for Genghis Grill that can prevent fraud at the server and bartender level. “They also do all of our camera systems [and] all of our surveillance,” Bhakta adds. “They have really created a full platform of customer visibility.”

Weathering The Storm
Despite its success, Genghis Grill is facing some industry-wide challenges. One of them is higher commodity prices. “[We] have been [coping with these] for the last 18 months or so,” Bhakta reports. “That’s really been a battle with grain and corn commodities.”

Another challenge is downward pricing pressure from competitors and budget-conscious consumers. “As a result, [there are] the Groupons and all of the group-buying deals out there,” he says.

“[The consumer is] looking for more bang for their buck as far as their food spending is concerned,” he continues. “From a financial standpoint, they’ve had some financial changes in their household.”

These pressures have been most pronounced in the Southeast, where “we’ve seen a decline in sales,” he states. Overall, though, “We’ve still weathered the storm really well,” he asserts, explaining that several of its locations have continued to see strong sales.