Back to Profile Gallery > Giant Snacks 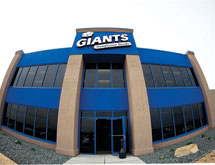 The phrase “as American as apple pie” should be changed for “as American as sunflower seeds.” Sunflower seeds are an American original crop, cultivated by the Aztecs, the Cherokees and other native tribes as far back as 3000 B.C. The Spanish explorers grew so enamored with their beauty that they took the seeds back to Spain, where they spread throughout Europe, finding a very special place in Russia, where they made the seeds bigger through hybrid species.

Russian immigrants took the seeds full circle when they brought them back to the States in the 1900s. Their flavor and versatility soon made sunflower seeds popular for Americans and today “chew and spit” is a great American pastime, especially at baseball games and other outdoor events.

Bring it Back Home
Bob Schuler started his business in 1958 as a distributor, grower and processor of sunflower seeds, selling domestically and exporting most of the premium seeds of the production to Spain, Israel and other parts of the world. In the ’90s, Jay Schuler (Bob’s son) decided to keep the best seeds in the country and give Americans the best product they could have. As a distributor of raw seeds, he started a new company selling the roasted, finished product. In 1995, Giant Snacks was born with a focus on the United States.

Robert Schuler, son of the company’s founder and co-owner and vice president of marketing for Giant Snacks, considers its hands-on approach the secret of its success.

“What sets us apart is that we contract with our own farmers directly, which ensures quality from the time the seed goes into the ground until it goes on the stores’ shelves,” he explains.

Bigger is Better
As the name indicates, Giant Snacks is not in the business of producing regular-sized sunflower seeds.

“We have specific hybrid sunflower seeds that the farmers have to use when they plant our product, so we can get a consistent, high-quality sunflower seed,” Schuler says.

“We found a jumbo variety of pumpkin seed that we were able to source,” Schuler explains. “It’s a large pumpkin seed with more meat and it will be a great addition to our larger-sized sunflower seeds.”

Three months ago, the company also introduced a corn snack that is larger and softer than traditional corn. “We worked directly with the original developer of this particular product – Dr. Shaver out in California – who was able to come up with a larger corn kernel,” Schuler explains.

The new products have been well received in the market and the company has numerous testimonials on its website attesting to the clients’ appreciation for the products.

Accommodating Growth
Giant Snacks was founded in 1995 with two salespeople and two distributors nationwide. Today, the company has more than 40 employees and a network of 200 distributors throughout the United States.

The market has grown for many different reasons, according to Schuler. “The population has grown, but also the increase of people with nut allergies; peanut allergies in particular have grown tremendously since 1995,” he says. That increase in peanut allergies has steered consumers to other healthy seeds and nuts, which has benefited Giant Snacks.

“The growth has been great,” Schuler says. “We’ve been in business for eight years and we’ve grown 50 percent per year.”

Giant Snacks needed space to accommodate that rapid growth. In 2009, the company opened a state-of-the-art production facility in Wahpeton, N.D. The 30,000-square-foot facility will allow the company to keep pace with its growing production, which was 5 million pounds of all the varieties last year.

Focusing on production and quality, the company did not want to forget about safety, either. “One big thing for us when building our new facility was safety,” Schuler explains. “We do two independent audits each year, one from ASI [American Sanitation Institute] and from AIB [American Institute of Bak¬ing]. We have excellent safety ratings from those two independent audits.”

Flavors of the Rainbow
One of the biggest challenges Giant Snacks met was getting people to try new products. Initially, the company stuck to producing the traditional flavors, but it soon ventured into salt and pepper, kettle roast with sugar and its most popular flavor, dill pickle. “We actually wanted to be more of an innovator in the flavor category when we introduced our new flavors,” Schuler explains. “We first came out with Dill Pickle and Salt & Pepper, which were both the first of their kind for a U.S. company. We followed up with Ranch, BBQ, Spicy Garlic and most recently our Kettle Roast, which has 40 percent less sodium and a touch of sugar for sweetness,” he says.