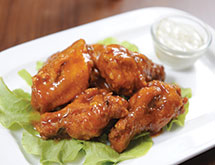 Giraffe Food & Beverage has been a family affair since it started, and the care the Powell family has for each other matches the care the company takes in creating its products. The operation began as a distributor in the early 1990s; founder Ari Powell’s parents owned a restaurant and were buying soda concentrates. They felt the big companies were not offering fair pricing, so they looked into generics and started distributing concentrates to their restaurant-owner friends. This quickly led to the Powells setting up their own plant to distribute their own concentrates.

“They were simple to make, so they realized the profitability of manufacturing their own instead of distributing someone else’s,” says Ellen Powell, director of research and development. “During the summer between law school semesters, Ari set up a facility in Burlington, Ontario. They started with one small tank and a 2,000-square-foot unit and it quickly grew.”

Ari Powell found that he really enjoyed making food products more than preparing legal briefs, which he says, “You can’t eat and nobody likes them anyway.” What began as a beverage business quickly evolved to include sauces and dressings as the customers requested more options for their limited menus, most of which included Buffalo wings. It was at this pivotal time in the business that Ellen and Ari met at the New York Restaurant Show and began a personal and professional relationship, dating and developing sauces and drinks together.

“Ari had begun creating our signature Aged Cayenne Pepper Hot Sauce on his own, so he was almost there,” Ellen Powell says. “Once I brought my industry experience and contacts, it was a slam dunk and we were ready to launch. Once the Hot Sauce was introduced, our customers demanded Blue Cheese and Ranch to compliment their Buffalo Wings, so these were natural additions to the line.” Giraffe also developed a full line of barbecue and rib sauces, pizza sauces, marinades and more.

Flavor and Experiences
Giraffe Foods was well-known for producing on-trend, flavorful sauces for wings and ribs in foodservice, so retailers approached it for private-label sauces during the economic downturn. Giraffe’s business now is split 60/40 between U.S. and Canadian distribution, and Powell says the company sees growth in both areas.

“Our sauces go along with getting messy and eating good food,” she says. “What makes us different from other sauce companies is that we recognize that it’s all about the flavor, which goes along with great experiences. We don’t sell anything we won’t eat ourselves at home, and we are super picky.”

Giraffe has become so well known in the restaurant and foodservice sectors that retail customers approach it seeking direction on flavor trends and innovation. Powell explains a major Canadian grocery chain partnered with Giraffe to enhance its frozen, boxed-meal offerings for chicken wings and pork ribs.

“Because they had specific label requirements, we modified popular restaurant sauces to make them appeal to their customer base seeking only natural flavors and colors with no additives,” she says.“The grocery chains that we supply with private-label sauces are doing well with the customer that knows to buy products that follow their brand standards. However, we find that the companies that focus on full flavors and indulgence are more successful in the marketplace. We’ve found that people shopping for wings don’t care about ingredients and nutrition because they are seeking the full flavor experience. In the chicken wing market, indulgence sells.”

Giraffe Foods is confident in its ongoing success because of its dedication to responding to customers’ needs and ensuring taste remains paramount. “We ensure quality and maintain a service-focused culture,” Powell says, “because the family is very much involved in the company’s day-to-day business operations.”

Powell and her husband work with a team of food scientists in product development and quality control while also representing the company in sales and marketing. Michelle Powell, Ari’s sister, and her husband, Ed Baldor, oversee a team responsible for company operations. As a former Intel programmer, Baldor developed and maintains the company’s custom software packages for batch processing, inventory and label design.

“We all work well together, proudly standing behind the company and our products,” Ellen Powell says. “Customers are reaching out to us every day, both new and existing, looking for new ideas and flavors for their menus and retail products. We do very little print advertising and only exhibit at a handful of trade shows because we know that the most important way to get our message across is word of mouth and industry connections. People trust that no matter what we give them, it will taste great, which means a homerun for them.”