Back to Profile Gallery > Glazer’s 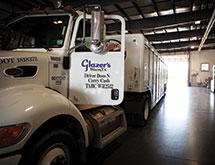 Glazer’s investments in technology and staff education are keeping the company ahead of the increasing growth and diversity of the products it carries. “We are striving to be the best distributor in the nation by accommodating superior technology and service,” says Rob Swartz, COO of the Dallas-based alcoholic beverage distributor. “Three years ago we began investing heavily in leadership development and technology, which we believe allows us to set a high watermark for service in the industry.”

These investments include a number of tools including inventory management, warehouse management and automated driver scheduling systems integrated into a company-wide SAP system. The SAP system, which the company began rolling out in 2012 and anticipates to be fully operational later this year, will also give suppliers and salespeople immediate access to sales data. “We believe cutting-edge technology drives our efficiency and makes us more competitive,” CEO Sheldon “Shelly” Stein says. “We’re interested in any technology that helps us to be a better distributor.”

Employees are offered career development, sales and product knowledge courses through Glazer’s University (GU), an online training program. Suppliers and customers can also access the product knowledge modules on GU. “We believe in having the best-trained and most knowledgeable people in the industry,” Swartz says.

Managing Product Growth
Glazer’s recent investments will allow the company to better manage its growing distribution operation. The company has grown in recent years through acquisition as well as organically.

“We’re seeing a proliferation of new products as manufacturers are flavoring up in major mainline categories,” Swartz says, noting that liquors such as vodka and bourbon now have a variety of flavors on the market. “The rise of SKUs is clearly a challenge for us as a wholesaler; how we get new flavored, seasonal and limited duration products to restaurants and retailers is something we look to technology and expansion to help us address.”

For Glazer’s, keeping up with new products has necessitated the expansion of several of its warehouse facilities. The company in recent year expanded a facility in Little Rock, Ark., from 100,000 to 300,000 square feet; built new warehouses in San Antonio, Texas, Cleveland and Lafayette, La.; and added space to facilities in St. Louis, Dallas and Houston.

A Family Tradition
The company is one of the largest wholesale liquor distributors in the United States and the country’s third-largest distributor of MillerCoors beer products. Glazer’s leases its own fleet of trucks, which it uses to pick up products from 50 manufacturing and distribution plants in 15 states.

Stein credits the vision of Glazer’s family ownership team, led by Executive Chairman and third-generation family member Bennett Glazer, with the company’s growth. “Executive management has the total support of the family,” says Stein, who joined the company in 2010 after a career in the investment banking industry. “Their direction to me was to build a business that would last another 100 years. Our owners want to leave a long-term legacy to the children and family members; this is truly a family business, just one that is run in a highly professional manner that still maintains the history and tradition of the company as best as we can.”