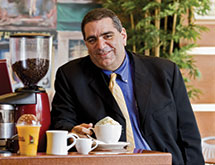 Global Brands Limited began because of one man’s dream to bring the American hamburger to the Caribbean in 1986. Since then, it has expanded to become a leading quick-service restaurant [QSR] company in the Caribbean offering a variety of food and beverage options.

President Mario Sabga-Aboud opened the first Burger Boys restaurant, which is similar to Burger King, but offered “Big Boy” and “Little Boy” burgers in Trinidad in 1986. After he fulfilled his dream of bringing the American hamburger to Trinidad and Tobago and the restaurant was successful, he wanted to expand. Pizza Boys was opened shortly after. “I always ask myself what’s next,” he says. “That chain started to grow so after that I go into bakery items because there was a need for that. After that we got into Chinese food, donuts and coffee.”

Today, Global Brands Limited owns 118 Pizza Boys, Church’s Chicken, Rituals Coffee House, Wok ’n Roll, Donut Boys, Rituals Sushi and V.I.P. Flyers’ Club locations in Trinidad, Tobago, St. Kitts and St. Lucia. “What makes us unique is that we have so many different food groups in one location,” Sabga-Aboud explains. “I was able to create a food mall concept about seven years ago, which is like a food court, to have all of our brands in one location. People can come with their family and be able to have chicken, Chinese food, coffee or breakfast. It became a real family destination.”

Creating Rituals
Of all the QSRs Sabga-Aboud has opened in the Caribbean, Rituals Coffee House became the greatest sensation. Coffee was never a strong part of the Caribbean culture because the tradition had always been to drink tea until Global Brands Limited opened its Rituals Coffee House, which made coffee accessible to people wherever they are, Sabga-Aboud says. “My wife asked me one day what coffee meant to me and to me it’s a ritual, which is how the name was formed,” he explains. “We have grown very strong and have about 53 of those coffee shops in Trinidad. We are opening one to two more each month and in 2016 we hope to have 100 in Trinidad.”

Ritual Coffee House is now a franchise operation and located on nine different islands. “I wanted to try and become the Starbucks of the Caribbean and we are doing well in all the islands.”

The success of Global Brands Limited has been built on four pillars: continued product innovation, serving nothing but the freshest products every day, delivering great service every day and developing and growing its human capital. Its mission is to provide the best-quality products and service in a clean, family oriented environment.

Continuing to Expand
Global Brands Limited has become part of the Caribbean culture and is looking to continue expanding its QSRs to capture the boom in Trinidad. “The island is really booming because we have a lot of oil and gas,” Sabga-Aboud says. “There is a lot of money being spent and disposable income.” The trick for the company has been to continue putting its restaurants in places where people congregate, such as hotels, malls, hospitals, grocery stores and office buildings.

The next venture for the company will be sandwich shops, which Sabga-Aboud hopes to open in the second part of 2014. He is actively pursuing some sandwich shop chains from the United States and working on his own sandwich concept if the chains don’t want to expand in the Caribbean. The company will also look to open a fine dining Indian restaurant in Trinidad this year. “The population is 30 percent Indian,” Sabga-Aboud explains. “There is a real niche for that right now.”

Global Brands Limited is also looking to expand into India, China and Latin America in coming years. The expansion into those countries would include only the company’s Rituals Coffee House restaurants. “Our growth has been crazy in the Caribbean and I am putting a lot of attention to growing the Caribbean market,” Sabga-Aboud says. “I feel that the world is a big place, but it’s not difficult to be conquered and dreams do come true.”