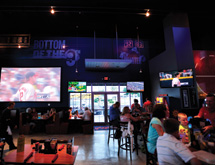 There are many sports-themed restaurants and bars, but Glory Days Grill sets itself apart by being a place where you can bring the whole family, co-founder Jeff Newman says. “We get all the sports fans at the same time.”

The Gaithersburg, Md.-based company has locations in Maryland, Virginia and West Virginia serving a menu which includes burgers, chicken wings, soups, signature sandwiches, ribs, pastas and seafood. The food focus is on freshness, and the restaurants’ seasonally driven feature menus are wildly popular. Newman started the restaurant in 1996 with his partners Richard Danker and Robert Garner, and Glory Days Grill will be celebrating 17 years in business in April 2013.

All three men had experience in the restaurant industry and saw the need for a sports-themed restaurant that was family oriented. “[It] was a niche that wasn’t being served,” he recalls. “When we started, there were a lot of places featuring sports that focused on men, but they were typically smoky, loud and did not have a quality food orientation.”

The family friendly sports restaurants that did exist at the time also had expensive menus, Newman recalls. When the trio opened their first location in Burke, Va., they created the name “Glory Days Grill,” from the idea that people live their own personal glory days through friends and family.

The early locations featured hardwired speakers at each table that allowed patrons to listen to the television of their choice based on the programming they preferred. “At the time, it was revolutionary,” Newman says, noting that today, the speakers at all restaurants are now wireless, providing a competitive point of differentiation.

New Additions
With more consumers accepting Glory Days Grill as a restaurant as opposed to a sports bar, the company has undergone a minor rebranding, Newman says. “Our motto [now is], ‘We’re The Official Food of Hometown Sports,’” he says. “We’re a food-centric concept. We serve simple food with the freshest ingredients and an extra dose of ‘wow’.”

Glory Days Grill recently added new items to its menu, including GRILLED Boneless Chicken Wings that are “selling off the charts,” Newman says. “These are 1-ounce pieces of all white meat chicken breast, marinated and grilled instead of fried, and then tossed in our signature wing sauces.

Glory Days Grill also added fish tacos to the menu, and recently, it started allowing guests to choose their “Most Valuable Protein” (MVP) when ordering a burger, substituting ground beef or USDA Prime beef with ground chicken, ground turkey or a veggie burger at no extra charge.

After testing this in some locations, Newman says that the results have been so encouraging that the company will roll out the MVP option system-wide this spring.

Good Deals
Although Glory Days Grill only has two franchised locations, the company plans to change that, Newman says. “We’ve proven for nine years that we can service a distant franchise community and because of our sustained success, now is a great time to pursue additional expansion of our brand through franchising.”

He explains that the company plans to open three additional company owned locations in the next 12 to 15 months, as well as expand through signing up new franchisees. In addition, the company has another restaurant concept, FANFARE Eatery, a fast-casual version of Glory Days Grill that was launched in 2012.

“It’s important that we can grow in different ways,” he says. “With the current challenging economic times working in concert and our impressive track record of achievement, we believe that there are good leasing deals to be made out there.”