Back to Profile Gallery > Golden Chick 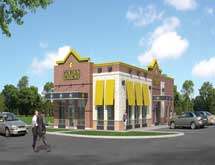 Established in San Marcos, Texas, under the name Golden Fried Chicken, Golden Chick set itself apart from competitors such as KFC, Church’s Chicken and Popeyes Chicken with its original recipe for all-tenderloin chicken tenders. After more than 40 years in business, the company has gained a loyal following of diners looking for a family-style eating experience, an affordable menu and a classic recipe for fried chicken.

Golden Chick President Mark Parmerlee, who has been with the company for more than 20 years, says he believes Golden Chick’s slogan, “The original and still the best,” is as true today as it was when he bought the company in 1989. It was after this acquisition that the company shortened its name to Golden Chick, with the first Golden Chick location opening in Richardson, Texas, in 1993. Since then, Golden Chick has grown to 90 locations throughout Texas and Oklahoma. Drawing in customers with its simple yet contemporary menu, the company’s philosophy of controlled expansion and centralized franchising has ensured its continued growth and presence in the Mid-south, Parmerlee says.

He calls Golden Chick “the best kept secret” of the chicken restaurant segment.

The recipe for Golden Chick’s chicken tenders was implemented in the 1980s, when the company was still operating as Golden Fried Chicken. It uses only the tenderloin of the chicken breast for every chicken tender, which they refer to as “The Best of the Breast.” The tenders are marinated and hand-battered before cooking, producing a final product that has developed a reputation with customers and competitors.

“Our tenders are better than any of the national [restaurants] can provide,” Parmerlee says. However, there are plenty of imitators, he says, and several restaurants have attempted to clone their tenderloin-only cooking approach. While these “clones” may try to mirror Golden Chick’s menu or its recipes, Parmerlee says he is confident that Golden Chick still offers a better menu variety and more menu options for customers than competing restaurants.

After purchasing Golden Fried Chicken, Parmerlee helped spearhead enhancements to the menu, restaurant appearance and franchising strategy. He now serves as the chairman of the board and president of Golden Chick, providing support for operations, marketing and financing departments while also helping support the Golden Chick’s sister company, Jalapeño Tree, a full-service Mexican restaurant chain run by his partner Paul Bambrey. According to Parmerlee, Golden Chick has kept pace with the industry by making sure its food and its stores stay simple yet contemporary.

Ten years ago, Golden Chick retained notable Dallas chef Stephan Pyles as a menu consultant. Parmerlee says the company brought Pyles on board to add several non-fried products to the Golden Chick menu, including the restaurant’s Golden Roast Chicken and Gourmet Chicken Salad options. The Gourmet Chicken Salad was a particularly effective addition to the menu, giving diners a healthy and tasty alternative to its fried food options, he says. “Without sounding biased,” he notes, “It’s the best chicken salad I’ve ever had.”

Currently, the company is working on a new menu format and restaurant layout. Parmerlee says he wants the new menu to be easier for customers to read and for the menu and the restaurant to be modernized. Golden Chick is also planning to introduce more salads to the menu, though Parmerlee says it is important that the restaurant not inundate consumers with too many options. “You don’t want to overcomplicate the menu and the operations,” he says. The goal is to stay simple, he explains, while considering future growth opportunities.

Golden Chick has had continued success in terms of sales in spite of the economic climate, according to Parmerlee. This is in large part due to the company’s product and the industry of fried chicken, a restaurant niche he says appeals to consumers when times are tough.

“We are a comfort food,” he says. “Instead of going out to a full-service restaurant during the week, people are pushing these outings to the weekend. For convenience and cost, they may turn to us for an entire meal replacement.”

With Golden Chick’s combination meal and side dish options, which are affordably priced, families can get their comfort food delivered or eat out during the week for less than other sit-down restaurants. Parmerlee says the company is very value conscious with its menu, but its business strategy will not include slashing prices any time soon.

“The whole segment has been offering more specials,” he says. “But we have steered away from deep discounts or dollar-menu items.” These are risky business strategies, he notes, because restaurants are banking on being able to secure a significant increase in traffic. If they fail to do so, they are just losing revenue, he says.

To gauge its performance and appeal with customers, Golden Chick relies greatly on R&D initiatives. Golden Chick does a great deal of research for a company of its size, Parmerlee says. Whether it’s utilizing in-store surveys and mystery shoppers, conducting psychographic analysis of customers, or hiring consultants to measure the company’s grasp on consumer trends, R&D factors into Golden Chick’s business strategy significantly, Parmerlee says.

Another tool Golden Chick uses to measure its business success is “The President’s Counsel,” an internal panel comprised of seven franchisees from diverse locations. The counsel meets every other month to discuss industry and customer issues as well as to share customer feedback and ideas for future innovation. All of this research is important for the company to see where it ranks in the minds of consumers and in its relationship to competitors, Parmerlee says.

Golden Chick makes a point to stay highly connected with the needs and concerns of each of its franchises, promoting the success of each individual franchisee as part of the Golden Chick family, Parmerlee says. “We really view our franchises as customers – which they are,” he says. “We try hard to help our franchisees be successful.”

Unlike other restaurant franchising programs, Golden Chick never marks up prices for its franchisees. The company makes sure its franchisees get a better price on shipments of goods, Parmerlee says. “We are big enough to have the food purchasing power yet small enough to be very personable with our franchisees,” he notes.

Though it’s helpful for new franchisees to have experience, Parmerlee says Golden Chick’s franchising program doesn’t require any. When a new site opens, Golden Chick sends an opening team to stay on site as long as needed. The company uses its purchasing power to carefully choose franchisees and future locations, taking time to help franchisees succeed and save money. “We really believe in controlled, concentric growth,” Parmerlee says, so Golden Chick helps franchisees extensively in areas such as training, site selection and teambuilding.

“While we are small in terms of number of units, we are big in terms of training materials, videos and training classes for our franchisees,” Parmerlee says. “We have a six-week training program for franchisees, and we also go on site to help open each restaurant, staying as long as needed.” Parmerlee says the company’s franchising approach is both conservative and selective. Golden Chick treats each of its locations like a neighborhood, he says.

Just as each franchisee is part of the Golden Chick family, so is each community. The restaurant often uses local store marketing programs targeted to meet the needs of customers in different geographic areas or franchise locations. Community involvement is a central part of Golden Chick’s business philosophy, he adds. “It makes us feel good, whether it’s being involved with the Boy Scouts, programs we are near, or Habitat for Humanity,” Parmerlee says.

At the urging of his partner Allen Tharp, Parmerlee has also begun looking beyond the chain’s region to add stores in Asian markets.

Tharp, who is  veteran of the foodservice business, bought into Golden Chick with the goal of developing restaurants in Asia. Tharp already has assembled a team with extensive chicken QSR development experience in Asia and has a full-time representative based there.

Although the expansion does stray from the company’s concentric growth model, Parmerlee says the Asian development initiative is very much controlled by Tharp’s separate team.