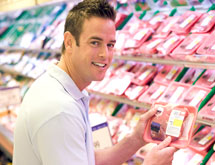 Golden Valley Industries of Stockton, Calif., has served its supermarket clients with high-quality variety meats and exceptional customer service since 1997. President and CEO Mike Sullivan and his father, Chuck Sullivan, started the company after identifying a unique need in the marketplace that had been ignored by other companies in the retail meat industry. “It’s the age-old adage: You find a niche and sell it,” he states.

Throughout the years, San Joaquin Valley of California had seen a large influx of minorities who were accustomed to certain meat products that were prevalent in the dishes of their home countries – such as pork feet, skin, ears, snoots and tails; beef marrow bones; turkey necks and smoked turkey parts – but were not readily available in the mainstream American supermarket.

Thanks to Golden Valley Industries, that is no longer the case. “The product that we sell is an inexpensive item with a high liability being worked on by the highest-paid people in the grocery store,” Sullivan explains. “We accepted the liability and relieved the chains of having to cut this product. We supply it cut and packed in a case-ready form.”

These items are now available fresh or frozen in the meat section of more than 3,000 supermarkets on the West Coast, he says. “We have expanded to service as far as New Jersey and Tex­as,” Sullivan notes. “We are continuing to grow on the East Coast and in the Mid­west. Our big growth objective right now is to grow nationally.”

“When you start at zero, any growth is rapid,” Sullivan jokes. Golden Valley Industries did not grow right out of the gate largely because “it took quite a few years to convince retailers that this was the way to go,” he says. The company helped its customers understand that there was indeed a need for conveniently packaged variety meats in the marketplace and that this need had long been underserved.

Immigrants who missed popular meals from the old country shopped for their items in mom-and-pop niche stores because they were not as accessible in large-scale supermarkets. As a result, the supermarkets were missing out on the opportunity to serve a growing segment of the population. What’s more, the modern consumer has grown to embrace unconventional meat products based on newfound interests in gourmet food and cultural dishes.

By utilizing the services of companies like Golden Valley Industries, supermarkets could “compete against some of the independent stores without having to use labor or increase their chances of liability,” Sullivan says. Meat byproducts are challenging to cut and package, “and with the high rate of workman’s compensation and insurance, there was an overall want and need in the retail industry to reduce their operational costs and liability. So, now, we are seeing an increase in volume in the last three to five years that has been pretty rapid.”

The company’s products are available at all major supermarket brands in each U.S. region. “We serve some of the smaller chains through a distribution channel,” Sullivan says. “But we’re looking for the larger chains because it seems like the larger chains have a larger need for our services.” Golden Valley Industries solely serves food retailers, he adds, and has opted not to go into foodservice at this time.

In addition to its headquarters in Stockton, Golden Valley Industries has operations in Missouri and Illinois, where many of its products are sourced. The company prides itself on being customer-centric; although consumers want conveniently packaged goods, they gravitate toward items that appear fresh or locally prepared. “We try to pack our products so the customer thinks it’s done in the back room of the grocery store meat department itself,” Sullivan says.

Golden Valley continuously improves the convenience of its packaging. “We’re case ready in that they can open the box and put the tray in the case,” he says. “We use a puncture-resistant film and extra thick tray with very little tray breakage. This means a high yield for the grocery store with very little problems, and we deliver weekly.”