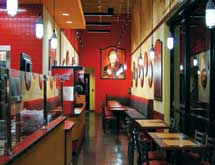 Carlota Murillo’s traditional Mexican delicacies have come a long way since her days of pushing a cart full of gorditas to sell in the streets of Ciudad Victoria, Mexico. Today, Gorditas Doña Tota has moved off the sidewalk and into malls throughout Mexico. As evidenced by a successful launch into the competitive Texas marketplace, Gorditas Doña Tota continues to grow in popularity even 60 years after Murillo first began bringing her cart to well-traversed pedestrian routes.

President of the Board Lourdes de Leon credits this success to the company’s commitment to perfect just one product while remaining true to regional authenticity in the markets it penetrates.

“Throughout our history, we have been able to survive by focusing on a single type of product with innovation in the menu offerings and fillings that go into gorditas,” De Leon says. “When in Mexico you speak of gorditas, it is an immediate reference to our company – it’s in its own category in that sense.”

A gordita – in the traditional sense – begins with a thick, palm-sized tortilla made from corn or flour. The tortilla is grilled quickly and cut open to form a pocket, which is then stuffed with regional Mexican stews. These include regional staples such as “carnitas en salsa verde” (seasoned pulled pork doused with green sauce) and “pollo pibil” (chicken with citrus achiote sauce).

“We’ve been able to keep it authentic, even though we have modernized the chain to more of a QSR [quick-service restaurant],” De Leon says. “We have not lost our heritage and roots in the way food is prepared and presented.

“We have very authentic dishes,” she adds. “We also have a vast variety of different stews that we offer, and they’re all offered in palm-sized gorditas.”

Gorditas Doña Tota employs more than 3,000 people at its 200 locations throughout Mexico and its six units in the United States. Each features as many as 16 different fillings, with each unit offering combinations that best suit the tastes of its surrounding region.

The Big Break
The gordita craze grew to the point where franchising was the next viable growth option. In 1995, Gorditas Doña Tota struck a deal with Soriana, the second-largest grocery chain in Mexico. Through this deal, Gorditas Doña Tota had an in-house restaurant presence in the food court of every Soriana market in Mexico.

“That’s when the company started to experiment with accelerated growth,” De Leon says.

Each unit offers at least 16 different stews, which are a regional-specific combination from Gorditas Doña Tota’s catalog of more than 65 recipes. Most units are located in mall food courts, and 30 percent of the units are in open strip malls.

All six U.S. locations are located in Texas, with the prototype locations based in Dallas. Gorditas Doña Tota used this prototype location to revamp the look of the U.S. franchises based on the expectations of the American consumer. This helped the company identify subtle yet important differences in customer service delivery.

“In Mexico, people are willing to wait a little longer for the orders, but that doesn’t happen in the U.S.,” De Leon says. “They want their food hot and they want it now.

“We have redesigned our operational flow to accommodate for that because we have to do more with less,” she adds.

This urgency for efficiency stems from the inflated costs of labor in the United States when compared to Mexico. De Leon admits that the increased costs have led the company to develop efficient systems and processes for its U.S. locations.

“Labor is different in the U.S. than it is in Mexico when it comes to costs,” she says. “In this design, we want to make sure we are catering to those sets of values, but in the process, making sure the cost structure is kept in line to the economics specific to the U.S. labor market, at the same time that we maintain the authenticity and heritage of our service and products.”

U.S. Invasion
Armed with a franchising consultant MSA Worldwide, a firm that specializes in franchise strategy in the United States, Gorditas Doña Tota is in a prime position to expand rapidly in America. The long-term goal is to become the most recognized Mexican restaurant in the United States.

“We really believe there is a space that is up for grabs,” says Carlos Martinez, Gorditas Doña Tota’s CEO. “What you don’t have is a dominant player from Mexico that has established itself in the U.S.

“As a dominant specific niche and with a proven successful business model, I think we have a pretty good shot at getting to our vision,” he adds.