Back to Profile Gallery > Grand Central Oyster Bar and Restaurant 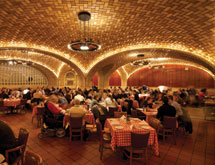 Grand Central Station in Manhattan will celebrate its 100th anniversary in 2013, and celebrating right along will be the Grand Central Oyster Bar and Restaurant, founded in 1913 in the historic station. In the early 1970s, the Oyster Bar had fallen on hard times and been clamped shut for awhile when founder Jerome Brody pried it open in 1974. With a new concept and lots of investment, imagination and hard work, Brody found a pearl there.

More a coffee shop than an upscale restaurant when it closed, the original Oyster Bar had acquired its name for its oyster stew – the rest of its menu was not oriented toward seafood. Reopening the 440-seat restaurant required massive renovation, but it was designed as a destination restaurant. It has become such a unique seafood specialist that it has spawned three other franchised restaurants — one in the Newark, N.J., airport and two in train stations in Japan. Brody’s spouse Marlene – Brody himself is deceased – owns the Grand Central Oyster Bar’s franchising corporation.

So what is it about the restaurant’s namesake that has allowed it to build an empire on the back of this humble mollusk? “The deal with oysters is their unique flavor, texture and variety,” Executive Chef and part-owner Sandy Ingber explains. “They’re not everybody’s cup of tea, but most people, once they try them, fall in love with them and the unique flavor. It’s kind of a trendy item and has become extremely popular all over America now.”

Falling in love with oysters is the right terminology, since they are rumored to have aphrodisiacal qualities. The oyster bar serves 30 different kinds of oysters and 30 different fish, plus chowders, salads, appetizers and smoked fish. “Our biggest seller is New England clam chowder,” Ingber declares. “We sell close to 400 to 500 cups of it a day.”

Is it disloyal to sell that much of the white, milk-based chowder instead of the red one with tomato that is named after the island on which the oyster bar is located? “Even though we’re in Manhattan itself, it’s split 2/3rds to 1/3rd white to red – it outsells Manhattan,” Ingber concedes.

What’s in an Oyster?
Oyster connoisseurs prize the variety of the namesake seafood available at the Grand Central Oyster Bar and Restaurant, which includes varieties from the east and west coasts of the United States. “Basically, one of the biggest differences between East Coast and West Coast oysters is the flavor profile,” Ingber notes. “On the East Coast, almost every oyster is distinctively different. Even from next-door harbors, they can be different flavors, with the differences in tides and food and the species itself. Even though it’s the same species on the East Coast, they’re distinctively different.”

Many varieties of oysters can be found on the West Coast. “The one big attribute of Pacific oysters is that they’re all sweet and less distinctive in their flavor differences,” Ingber maintains. “Also, once you begin to go further north, all the way to Alaska, they do get more briny, but they all have a distinctive sweet flavor. Because of that flavor profile on the West Coast being less distinct as they are on the East Coast, we sell approximately 2/3rds East Coast and 1/3rd West Coast.” Alaskan oysters are not available often, but Ingber says they are very popular and good.

Oysters for Lunch Bunch
The dominance of lunch over dinner has been waning in recent years as the dinner business has strengthened, although Grand Central Oyster Bar still has a healthy lunch business. “Lunch is a very busy time,” Ingber concedes. “Lunchtime is mostly business-oriented, commuters and some tourists. That’s seasonal. During the high travel times in summer time, it’s a very big tourist time, whereas most New Yorkers are on vacation.

“The time between Thanksgiving and New Year’s is our busiest time of year,” he adds. “More than 50 percent is tourist at that time. We do about 30 percent of our business in a short, six-week period of time.”

Because customers spend more at dinner, the proceeds from that final meal of the day are almost equal to lunchtime sales. “It’s just spread out over a much longer period of time,” Ingber points out about dinner income. “They also eat differently – they eat in more courses at dinner, more leisurely, with more wine, a full-course meal. They want to eat faster, quicker and lighter for lunch. So the ticket average for dinner is much higher.”

The restaurant serves the same menu at the same prices for lunch or dinner and is open from lunch through dinner. “Few places in Manhattan do that,” Ingber maintains.

Simple Preparation
Simplicity is key to the preparation of fresh, quality seafood, Ingber believes. Heavy sauces and elaborate recipes are not part of the current style of seafood preparation.

“Fish is very simple to prepare, whether broiled or pan-fried,” Ingber notes. “We do some poached fish, usually more in the winter time. The trend over the last 15 years with health consciousness is plain broiled with just a little bit of potato and vegetable, no butter.”

Nowadays, diners have food allergies and specific needs like gluten-free food. “That is no problem for us,” Ingber maintains. “We have a unique way of broiling. We have a system of racks that we put our fish on and brown atop a broiler, and then finish in a very high-temperature oven.”

Feeding so many diners at the Grand Central location is achieved through layout and organization. “It’s not a massive kitchen,” Ingber declares. “We fit six cooks in there, and it’s evenly spaced, but it all works.”

The menu is so extensive that food orders utilize all areas of the kitchen. “We’re famous for oyster stew, oyster pan roast and other assorted varieties,” Ingber lists. “Some people come in just for chowders.

“At nighttime, we’ll tend to serve more entrée-type fish, but since it’s spread out over a large period of time and because of our experience, we know how to handle large volumes as we do during Christmas time. We can do it. It’s a hectic environment, but we can do it, and we do it successfully.”

Seafood Sources
Freshness is a key ingredient of the seafood at the Grand Central Oyster Bar and Restaurant. “Ninety-five percent of our oysters are purchased directly from the farms, and we order daily,” Ingber stresses. “Any oyster we have is usually never more than two to three days old.”

Some are trucked and some are flown in. “The most common way is trucking to the fish market and having them trucked to us on a daily basis,” Ingber says. “Seventy-five percent to 90 percent of the fish I purchase is purchased by sight at the fish market by myself. I go there five days a week, handpick all the fish and then it’s trucked over to us.”

Ingber also relies on air freight. “It’s opened a big world of freshness available direct to us that we never had before,” he emphasizes. “Nowadays you can have fish from the farm to the plate in less than 24 hours. So we rely on the freshness of super-quality fish – that’s what we’re all about. We’re all about the quality, not as much about the fanciness. We consider ourselves to be the freshest and largest seafood restaurant in New York, if not the country.”

The restaurants’ suppliers help it meet its goals, among them Alaskan Feast, a supplier of wild salmon and Pacific oysters, and Eastern Fish Co. “I’ve been working with Dan Kim at Alaskan Feast for over 10 years,” Ingber recalls. “The service is extremely good, and the product is very fresh. It’s been a loyal relationship for me, which is a big part of my day. The fish market is relationships and knowing that the people that I buy from are always selling me the freshest and best product at the best prices. So my relationship with Dan is knowing that when he does sell me oysters that they are the freshest that he has, and the people picking the stuff for me are also going to be the best.”

Ingber also has been buying large shrimp for 10 years from Eastern Fish Co. “We’re only one of two restaurants that buy direct from them,” Ingber maintains “They opened up a wonderful world for us of consistency for our shrimp cocktail that we didn’t have before we were involved with them. It’s a fantastic company. I have a policy of not changing purveyors at the drop of a nickel, and once again, my relations with my wholesalers are extremely important. I’m a very loyal customer.”

The Grand Central Oyster Bar and Restaurant is planning for its 100th anniversary in 2013. “There are going to be events throughout the year plus we’re going to have a gala ticketed event, more than likely black tie, celebrating our 100th anniversary,” he says. “We’ll have souvenirs for sale, and we’re also going to launch our cookbook that will be released next year.”

Sales for the company are growing from 5 to 8 percent annually, and Ingber sees that continuing into the next 100 years. “We’re very happy with that, and I think that the seafood trend is still very popular,” Ingber insists. “Seafood is healthy, and that’s where I see our growth. We’re looking forward to continuing this economic growth that we have, and we’re expecting a great year next year.”