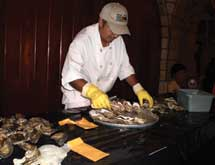 The Grand Central Oyster Bar in New York City’s Grand Central Station is probably one of the most famous seafood restaurants in the world. The historic eatery has been featured in the opening credits for “Saturday Night Live” and was used as base of operations for the “Oysters” video category on “Jeopardy!” But it’s the restaurant’s fresh fish that really makes the place famous.

The 24,000-square-foot restaurant features vaulted ceilings covered in tiles. Although the company won’t be making any changes to its Grand Central site, there are two franchises in Tokyo and a location is in the works for a satellite operation in a terminal at Newark Liberty International Airport in New Jersey.

At Grand Central Oyster Bar, the food speaks for itself. “We let the fish do its thing,” General Manager Jonathan Young says. “We don’t over-sauce [the fish], and we offer large portions.”

“We usually carry about 30 different types of oysters,” Young says. “Ours are the freshest because we only order for the day, and we have them delivered every day. So sometimes at night, people get bummed out because we run out of something.”

The chef goes to the seafood market every day to buy the seafood, and the oysters are delivered to the restaurant every day. “No one offers more oysters than we do,” Young says. Because the fish market is closed on Sundays, so is Grand Central Oyster Bar.

The fresh fish, described on the menu as “Today’s Catch,” is usually prepared simply, Young says. The fish is pan seared, fried, grilled, broiled, pan fried and sometimes served with a light sauce or specialty butter.

Grand Central Oyster Bar offers its fresh fish in a variety of creations. Under the “Smokehouse” heading on the menu that is updated daily, the restaurant offers several varieties of smoked fish. Also available on a daily basis are seafood stews and pan roasts. Other mainstays on the menu include main dishes, which are the chef’s specially prepared meals made with fish of the day; shellfish platters; soups, which include both Manhattan- and New England-style clam chowder; raw bar; cold buffet; cooked shellfish; and desserts. The New York cheesecake is a favorite among patrons, Young says.

The Grand Central Oyster Bar also has a large lobster tank so customers can pick their own lobster or inform the wait staff what size they want. Customers also can choose their preferred type of lobster preparation

It’s hard to imagine a restaurant in a train station would offer 450 bottles of wine to choose from, Grand Central Oyster Bar doesn’t skimp on the vino. According to Young, the restaurant also has 60 to 70 wines by the glass. “We offer the finest-quality seafood, but in a more casual atmosphere than a five-star restaurant,” Young says. “And we have the best wines to accompany it.”

The rest of the full-service bar is no slouch, either. With 30 bottles of single-malt scotch, a variety of bourbons, vodkas, gins and rums, you don’t have to be a wine connoisseur to enjoy a drink at the Grand Central Oyster Bar. The iconic restaurant also offers 12 beers on tap and another 20 in bottles. “We try to carry a lot of microbrews,” Young says. “We change the beer seasonally.”

The Grand Central Oyster Bar has won Wine Spectator awards for its extensive wine list, and it was a winner of the James Beard Award in 1999 in the “America’s Classics” category.

Young says approximately 1,200 people visit the Grand Central Oyster Bar on a daily basis, and the clientele changes throughout the day. “For lunch, it’s usually business people, late lunch is tourists, early dinner it’s business people again sometimes having an impromptu business meeting and it goes back to tourists at night,” he explains. With New York City being an international destination, Young notes that the restaurant has seen an increase in customers from Europe, Japan and South America, especially Argentina.

Although it can be expensive to dine at the Grand Central Oyster Bar, customers don’t have to order the pricey lobster. There are plenty of options on the menu that a guest can order a full lunch or dinner for $20, Young says.

He adds that the Grand Central Oyster Bar offers several affordable wine bottles in the $30 to $40 range that customers have been more likely to try because of the price point, and he believes people have just become more adventurous when dining out.

“We’re not selling as much of our [more expensive] reserve wine,” Young says. “With what’s going on with the economy, we’re seeing a lot more requests of separate checks. One for food and one for wine because expense accounts have changed. We’re also selling a lot more wine by the glass.”

Young has been in the restaurant business for 25 years, getting his start washing dishes when he was 12. He has done everything except cook, he remarks. “I’ve worked on the line, but I’m no chef,” he explains.

Young first visited the Grand Central Oyster Bar about 40 years ago when his grandmother took him there for lunch.

When it comes to new employees, Grand Central Oyster Bar doesn’t mess around. Young says new servers will shadow a veteran member of the wait staff for about a week. If they don’t have the hang of it by then, the employee is let go. “You have to come with a skill set,” Young explains. “You need the right attitude and experience.”

“We try to do as many good deeds as possible,” Young says of the restaurant’s philanthropic ways. “We didn’t do anything official, but all the employees chipped in to make a donation to help Haiti.”

Grand Central Oyster Bar’s philosophy is simple yet poignant: “We put fresh fish on a plate,” Young says. “There’s no pretension here. Whether you’re in a suit or jeans, we treat you the same and give you the freshest fish, period.”