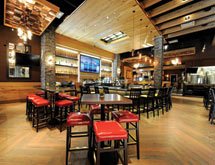 Is it better to be a big fish in a small pond or a small fish in a big pond? Granite City Food & Brewery, currently swimming in 30 ponds, is now opening eateries in larger ponds as part of its expansion plan.

The casual restaurant chain with a microbrewery in each eatery was founded in 1999. Its first location in St. Cloud, Minn., is in a large granite-producing location, thus resulting in the name “Granite City.”

When expanding shortly after the founding, the company decided to focus on secondary, smaller or “tertiary” markets such as Davenport, Iowa; Fargo, N.D.; Sioux Falls, S.D.; Fort Wayne, Ind.; and West Wichita, Kan. The company knew it would have less competition in these markets and could quickly offer the best food and brewery option in town.

Being this big fish in smaller ponds worked quite well for Granite City Food & Brewery as it expanded throughout the Midwest, the company says. However, having maximized the strategy, it’s run out of right-sized ponds so it now seeks to open new sites in more densely populated areas.

The plan to “be the best restaurant in medium-sized towns” worked from 1999-2007 when it built 26 restaurants in 12 states, says Chief Concept Officer Dean Oakey. But after conducting market research, it determined it needed a base market of at least 250,000 local residents to thrive. Looking at a map of the Midwest, Oakey says, the company determined it was time to move into bigger markets instead of stretching out beyond the Midwest and extending its supply lines too far.

Now, the casual restaurant group is opening new establishments in downtown Indianapolis and the suburbs of Indianapolis, Chicago, Detroit, Nashville and Cleveland, where it faces stiffer competition but also opportunities for greater profits.

They are all “great locations,” he says. For instance, the Nashville site is attached to a popular hotel for catering opportunities, the Ohio location is in a high-end lifestyle center and the soon-to-be Chicagoland sites are located in affluent suburbs. The downtown Indianapolis site, which opened in July, has “opened nicely,” Oakey says.

‘Fermentus Interruptus’
One of Granite City Food & Brewery’s biggest advantages in its business plan is the breweries. The company operates its central brewing facility in Ellsworth, Iowa. The Granite City Brewery there begins the brewing process for all its sites, creating wort. Then, it ships this sweet liquid to all individual brewery locations, which use it to finish the beers.

This assists Granite City Food & Brewery’s compliance with interstate liquor laws. Placing full microbreweries at each location would be cost-prohibitive and time-consuming for staff. Granite City employs a brewmaster at each site, and employs regional traveling brewmasters who each oversees six sites with this process, the company says.

The breweries at each restaurant cost $300,000 to equip – less than half the price of a full-process brewery.

As Granite City Food & Brewery is not allowed to make beer and ship it across state lines, this process also avoids the need to deal with third parties and distributors who charge hefty markups. With this procedure, it can produce beer at a lower cost than other breweries do, Oakey explains.

Quality is also more consistent across all sites since it is all made from the same wort. As it is so efficient, Granite City Food & Brewery patented the brewing process called “Fermentus Interruptus” so that each restaurant can be a craft brewery.

Granite City Food & Brewery was founded by a top executive from the Champps Americana casual restaurant chain. From the start, it decided to go slightly more upscale and add a microbrewery to each site.

As more sites were built, the developer began to own more and more of the company, so in 2011 Oakey and business partner, CEO Robert Doran stepped in and bought control, also purchasing the Cadillac Ranch brand and six Cadillac Ranch restaurants later that year.

When new stores opened with these changes, sales rose.

With an average ticket price of $16 per person, it compares favorably to rivals P.F. Chang’s and Cheesecake Factory for a similar or better experience, Oakey insists. “It is value-priced within reason,” Oakey says. “We have great food, great service and a great atmosphere.”