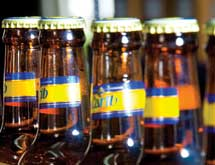 This year, Grenada Breweries Ltd. of Grenada, West Indies, has more to celebrate than its 50th anniversary, Managing Director Ron Antoine says. Its flagship beer, Carib Lager, is making waves worldwide, and its other beer and soft drink brands – already beverage staples among Caribbean consumers – are expected to follow suit.

Grenada Breweries Ltd. is a member of the Trinidad-based Caribbean conglomerate ANSA McAl Ltd. and shares a common business platform with breweries in Trinidad and St. Kitts. Together, these regional breweries produce Caribbean beverage staples such as Carib and Stag Lager beer, Guinness and Mackeson Stouts, and numerous soft drinks like Shandy Carib, Ginseng-Up, Juicy Cool and Maltas.

Although it has reached a significant milestone in its company history, Grenada Breweries continues to grow and strengthen its brands, Antoine notes. The firm is conscious of changing market trends and heavily invests in its manufacturing plant with strategic equipment upgrades and quality assurance programs that enable it to innovate and evolve. These values are shared across the three breweries that make up the ANSA McAl brewing group. However, “We are at heart a very traditional brewing company,” he says.

Grenada Breweries was established in 1960 by the Caribbean Development Co. Ltd., based in Trinidad. It started producing Carib Lager in 1961 followed by other major beer and malt bev­erage brands. The company began pro­ducing Guinness Foreign Extra Stout in the 1980s, and Guinness PLC be­came majo­rity shareholders in the 1990s. In 2002, ANSA McAl Ltd. purchased Diageo PLC’s majority interest, and Grenada Breweries was returned to the group as a sister company to Caribbean Devel­opment Co., the company that first produced Carib Lager in 1950.

The Carib Premium Lager beer brand is iconic in the Caribbean and very much at home in the hands of Grenadian beer drinkers. As a major spon­sor of cultural and sporting events, the Carib brand is very prominent in Grenadian activities.

Grenada Breweries strives to be a good corporate citizen and supports sev­eral charities such as the Grenada Heart Foundation and Grenada Com­m­un­ity Development. Regionally, the brand is available throughout the English-speaking Caribbean, the Dutch and French territories, and internationally in Puerto Rico, the United States, Canada and Europe. “Through the group strategy, we are looking at expanding internationally,” Antoine says.

In the past five years, Grenada Brew­eries’ exports have grown exponentially, which is evidence of the world-class nature of its brands, in particular, the Carib beer brand, he adds. Carib Pilsner Light beer was recently developed and is showing early success in Trinidad.

Beers can’t reach international prominence without solid quality assurance and safety initiatives. “We are a HACCP-certified company,” Antoine says. “But we never rest on the quality front. We are constantly challenging ourselves to see how we can improve the quality we have achieved.

“In 50 years, much expertise has been gained by having successfully brew­ed several international brands to the exacting global standards of multinationals,” he continues. “The company clearly understands the importance of incorporating cutting-edge technology and modern equipment and processes, which is why it invested more than $10 million (U.S.) in plant upgrades.”

Although the poor economy makes it difficult for growth, Grenada Breweries continues to seek operational efficiencies while maintaining its quality. “We’ve been looking at ways to become more efficient and cut costs from the operation in ways that won’t compromise quality,” Antoine says. “Our focus is to achieve world-class efficiency and feel it’s one of the best ways to cope during an economic crisis.”

Antoine credits the company’s employees for helping Grenada Breweries reach international success. He says this success has come about due to the hard work and dedication of the company’s staff over the years, as well as the commitment to continuous improvement and innovation in its production and marketing efforts. “We are particularly proud of our flagship lager, Carib, and the fact that it is truly an international brand,” Antoine states. “We appreciate the input of everyone that has helped us get here and hope to keep satisfying the taste buds of consumers across the world.”