Back to Profile Gallery > Grill Concepts 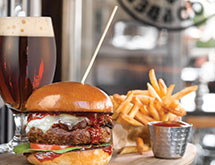 Los Angeles-based Grill Concepts has called class into session with its newest concept, Public School. The gastropub delivers an education in the art of food and beer. The concept was launched three years ago when it converted the bar area inside one of its Daily Grill locations in downtown Los Angeles into a testing site.

“Looking back, it was probably the best decision we made in launching Public School 612 – we were able to test the décor, the food, the ambiance, the beers – everything without actually opening a full restaurant until we were ready,” Senior Vice President of Operations John Sola says.

The company then found a location in Culver City, Calif., and it became the first free-standing Public School. Affectionately adding the ‘310’ area code after the name symbolized it would be the only one of its kind. It also allowed Public School to disassociate from Daily Grill and any chain-like perception that guests may develop as new Public Schools opened. “We’ve had great success in Culver City – we’ve been able to open up one Public School per year,” Sola adds.

Public School locations to date include 612 in Los Angeles, 310 in Culver City and 805 in Westlake Village, Calif. Three more are on the horizon in 2015: 818 in Sherman Oaks, Calif., 214 in Dallas’ West Village and 702 in Las Vegas. All except Public School 612 are aptly named with a local area code to establish roots in each community. Purchasing Manager Thomas Kachani describes Public School as “fun-dining” because of its casual, non-pretentions atmosphere with industrial chic décor and alternative music. “We have launched a high-energy gastropub that exclusively offers craft beer with an eclectic food menu,” he says.

The chef-driven menu developed by Executive Chef Phil Kastel features seasonal items that are organic and locally sourced, and each dish is made from scratch. “It’s hard to describe the menu other than saying its ‘eclectic’ because we change it so often based on the season and trends; we’re always exploring new flavors,” Kastel admits.

Kastel goes on to explain that social media has made guests more willing to try new dishes more than ever before. “Our guests want to be the first to Instragram it or the first to tell their friends about it,” he notes. “Today everyone is a foodie and our restaurant is their classroom.”

Education is Paramount
Public School promises an education in food and beer and to do so, it must first educate its staff – the teachers. Kastel and his Chefs de Cuisine, Lauren Kyles (PS310) and Nathan Heartman (PS805), personally train each server, bartender and hostess on the seasonal menu. “Our training is intense,” Kastel boasts. “Each staff member spends seven shifts tasting every ingredient in the food. Every server and bartender has to be a version of me – understanding the flavor profile of each ingredient and the respective allergies to it. The head chefs work closely to reinforce this training on days I’m not in the restaurant.”

Menu item are tasted a minimum of three times by every staff member during their training and the alcoholic beverage training is just as extreme – staff members spend 10 shifts learning the flavor profiles of its craft beer offering. Every server must be confident and accurate in suggesting which drink to pair with which entrée because people ask this more often than anything else. Craft beer may be one of the main highlights, but guests can also choose from a variety of handcrafted cocktails or wine.

The training may be intense and ongoing, but it is the only way Grill Concepts can ensure that every team member in the restaurant can educate a guest. “That product knowledge and consistency carries through to all of our restaurants,” Sola says.

Creating Concepts
Grill Concepts was founded in Los Angeles 30 years ago when it opened The Grill on the Alley, a fine-dining steakhouse in Beverly Hills. Five years later, it opened a scaled down version called the Daily Grill with a broader offering in a more approachable atmosphere. Today, the company has 7 Grills, 17 Daily Grills and 3 Public Schools in nine different states with its biggest holds in Southern California.

Although Grill Concepts has multiple locations for one concept – they do not run chain restaurants and that helps the company stand out in the industry. “We intentionally choose to be non-corporate – each of our restaurants is different,” Kachani explains. “Every location comes with the quirks of the local clientele and their tastes. Our menus are similar, but customers are vastly different and that’s who we cater to. We are not a 200-unit company trying to do the same thing in every location. Plus, our food quality is too high. We could never operate the way a gigantic conglomerate does. I mean, we still make everything from scratch.”

This recipe works for Grill Concepts as it is growing fast. Along with opening several Public Schools, the company is looking for locations for all of their concepts. Recently, Grill Concepts has taken over development of The Ritz, an iconic dining destination in Newport Beach, Calif. Grill Concepts is also in the process of developing another seafood-centric concept, Sola says. “Our goal is to continue expanding and double in size over the next five years,” Kachani adds. “As we look for locations and real estate markets, we are staying away from commercial spots and going more into the community.”