As one of the most recognisable European brands of lager, Grolsch is considered to be in the leading group of quality beers, and is drunk in a huge number of countries all over the world. With a long heritage, the company boasts a wealth of experience, and calls on brewing techniques that have been developed and refined over a period ofalmost 400 years.

Grolsch International is a subsidiary of Royal Grolsch NV, a mid-size company based in the Netherlands, which saw a total annual net profit of 18 million euros for 2005. The brewery was founded in 1615, at a time when Dutch brewing techniques were highly revered. These skills have been the basis on which the company’ success has been built and they are still in practice today, with some minor, modernised alterations. Today the company has a reputation for producing premium lager that is enjoyed in every corner of the world, with strong markets especially in its country of origin, Holland, which is followed closely by the UK, the US, France, Canada, Australia and New Zealand.

Since its foundation in the early 17th century, the Grolsch name has established a strong reputation for excellence, and today is steeped in tradition. The green glass bottle with a swing top, easily recognisable in any supermarket or bar, is a trademark that has stayed with the brand and symbolises quality. In moving with the times and reacting to new trends, the company also offers its beer in cans and crown cork bottles, but for the purist there is still the option of the large bottle. By sticking to this style for so many years the company has managed to create a brand distinction and this is a strong basis on which to build for future marketing.

In order to further develop the brand in its various regions, Grolsch International forms alliances and partnerships with various local brewers who are coming under pressure from the bigger international companies.

The president of Grolsch International, Rob Snel, has been with the company for over 22 years and comments: “For export purposes, our beer is brewed in Holland because the country of origin is very important in this segment of the market. However, we do our own brewing license agreements in two countries: in the UK, the Grolsch brand is brewed by Coors Brewers that has been brewing since 1996, and looks after the sales and marketing in the UK and Ireland, whereas our other brand, Amsterdam, is brewed under license in Moscow, Russia by Efes.” 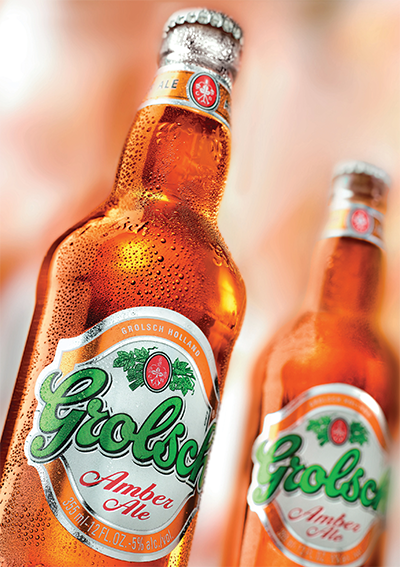 In the US, Australia, Canada and France, as well as various other markets, the company has teamed up with local importers and distributors to get better access to new areas. These regions account for 73 per cent of the total export sales and so are a main focus for the company; each of these regions are places where there is a powerful market for foreign beers of a high standard, a niche that Grolsch is specifically aimed at. In each of these key regions the Grolsch brand is a well established favourite, and over the years since the beer was first exported to these countries, it has become renowned as a premium quality lager for fans of strong tasting, high calibre lager.

In total the company is present in over 70 markets globally, with varying levels of success, but in each it has worked to establish its product as a top-end beer aimed at the connoisseur. In the markets outside of the key areas in which it operates the brand has achieved a strong position and is in the process of increasing its distribution.

In the US the company has already become a solid competitor in the premium market and is a recognised and trusted name in most supermarkets. This is one of the biggest markets for Grolsch and is therefore a key focus for the development and growth of the brand overseas. Until very recently the company was dealing with USB, an importer of lagers, but following a new deal that was struck in the beginning of this year, Grolsch will now be imported by Anheuser-Busch.

Anheuser-Busch is the largest brewer and distributor of beers in the US, and is responsible for the national sales and marketing for Budweiser across the whole country. It has developed a system for best representing a premium quality lager nationally, and therefore it is a big step for the Grolsch brand to be working with such a renowned organisation that can give the best possible service to its beer. By working in close quarters with this new partner Grolsch is already set for a big push in the US.”The change in partnership was originally scheduled for 1st January 2007, but was brought forward so that both companies could begin to work out a plan for the US market as soon as possible. The deal went through on 1st April of this year, and we’ve already been formulating a strategy to make Grolsch more prominent in the premium lager market across the whole of the US,” explains Jan Van Der Velde, Grolsch International’s marketing director.

“We’ve certainly got very high hopes to further develop the US market and this was perfectly explained by the CEO of Anheuser-Busch, August A Busch IV, and the CEO of Grolsch, A J Pasman, when, we were over in the States to announce the new partnership: ‘The US market is like Sleeping Beauty that has now been awoken with a kiss from the king of beers.’ So yes, we have high hopes for the partnership and the opportunities it’ll offer us, after all partnerships like these benefit both parties involved.”

The company has recently been operating in a tough market, due to a price war at the major chain stores in Europe and some unfavourable exchange rates, but despite this Grolsch is still in a strong position in the international market. The hard work that the company has put in has paid off and it can now start to make the most of this new link with its major US distributor as well as taking a hold on the various markets where it is active.

Still focusing on major changes and developments within the company, Rob continues: “Another important milestone in Grolsch’s history, came in 2004 with the opening of a brand new greenfield site. The new location has been fitted with cutting edge technology to make it meet the high production standards that are required for quality lager today, and is also very environmentally friendly.”

The new brewery is backed up by the addition of a new R&D site, which will allow Royal Grolsch to bring new product innovations to the market, and make the quality of its premium lager as high as possible. This new site is known as the Trial Brewery, and is a relatively small facility that has the capacity to ferment, brew and filter in order to find the best solution to various needs. One of the key advantages of having a separate unit for the testing and development of the lager is that it doesn’t disrupt the main production systems by using valuable space and machinery. In the Trial Brewery the company can exactly replicate the processes that take place in the brewery, so it gives the company an opportunity to work out specific ways to improve production techniques.

This facility has produced a series of new products over the last 12 months, all of which have been proved highly popular. As well as three new beers for the domestic market there is Grolsch Light Lager, which was produced specifically for export to the US, and has already made an impact there. The products are all a variation on the original Grolsch recipe, with added twists to appeal to different niches in the alcoholic beverage market, such as the Light Lager, which is tapping into a massive growth area in the US. The product has experienced a great deal of success due to its marketing strategy, working with the main high street retailers, and it has settled well into the light beer niche.

In 2005 the company started a new advertising campaign, in line with a change of packaging. The labels and drinks containers were modernised and the brand received a total overhaul. Under the slogan ‘Beer the Grolsch Way’, the campaign was launched on the television, internet and printed media, as well as being featured in outdoor events, and shop floor displays, and has made another huge impact for the brand.

Market figures indicate that the Grolsch name has benefited significantly from this recent push in advertising and that the beer is hitting the right target group more effectively following this. It is expected that this will be the basis for a marked growth in volume of sales, and will seriously boost the market share that the brand controls.

With Grolsch continuously introducing and participating in various campaigns to increase its brand awareness, Jan outlines: “One of the company’s recent campaigns is in the UK and is called Green Light District. This is a very unconventional way of communicating, not only with your customers but also with your consumers in the big cities. It’s a different marketing approach that is created to provide you with a Dutch-style drinking experience. In 2006, 14 UK cities will play host to the Green Light District, where consumers will be able to enjoy Grolsch in some of the most stylish bars in town, served by our waitresses.

“We started off with two sites in London; one on the 27th of March and the other on the 10th of April, moving on to Leeds, Birmingham, Bristol, Brighton, Cardiff, Nottingham, Sheffield, Newcastle, Liverpool, Manchester, Edinburgh and Glasgow.

“I am very enthusiastic about this campaign as it combines quality, consumer needs and meets all requirements. Customers have been commenting on how successful this campaign has been as they have experienced double and triple sales figures and this has also doubled and tripled the awareness of the Grolsch brand.”

Jan and Rob also comment on the major challenge facing the entire beer industry. Jan states: “There are a number of alcoholic and non-alcoholic drinks that have been trying to get a piece of the market share of beers. For example, these would be wines, the RTD sector (Ready To Drink) like Smirnoff Ice and the FAB sector (Flavoured Alcoholic Beverage). And because of the focus on youngsters heading for a big night out on the town, the popularity of white spirits like vodka seems to be increasing and this is probably also due to the popularity of RTD and FAB.”

Rob adds: “So the big challenge for the entire industry is being recognised. If you look at the innovations that hit the market last year, it’s extraordinary. It’s incredible what different types of beer, different angles, different packaging, like aluminium bottles for instance, can bring to the market in order to give beer its relevance back again and also to enrich the consumer’s experience of beer again. It’s basically placing beer on the preferred map again.”

He concludes: “I believe the consumer is going to see a lot of innovations, not only from us but also from other brewers because the whole global beer industry has finally recognised the fact that we have been sleeping for a number of years, while the other segments have been happily helping themselves to our market shares and profits.”