Back to Profile Gallery > Grotto Pizza 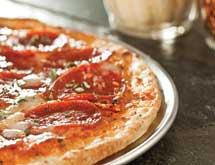 Legend has it that in the late 1700s, King Ferdinand I disguised himself as a commoner and secretly visited a place in Naples to taste pizza, which was something Queen Maria Carolina had banned from the royal court. When Dominick Pulieri launched Grotto Pizza in 1960, he also went out into the community – not in secret like King Ferdinand, but to promote pizza to the residents of Delaware. Realizing success with this tactic, Grotto Pizza continues to be a big part of many Delaware communities today.

Born in Wilkes-Barre, Pa., to Italian-immigrant parents, Pulieri studied biology and medicine in college, and taught biology, general science and chemistry from 1965 to 1970. While he was still in high school, however, Pulieri began making pizzas with his brother-in-law, Joseph Paglianite, and his sister at Paglianite’s pizzeria in Harvey’s Lake, Pa. This experience led Pulieri to develop a love for the Italian pies, and in 1960, he worked with his sister and brother-in-law to open a new pizza restaurant in Sussex County, Del.

“This was the birth of Grotto Pizza,” the company explains. During the first summer the business was open, pizza slices were 20 cents each and an entire pizza was $1.60. Low prices, however, didn’t draw in the crowds, because pizza was not a familiar food to denizens of the Mid-Atlantic state. Believing the people of Delaware would love pizza as much as he did, Pulieri and his sister spent much of their time talking to the local res­i­dents and tourists who passed by the restaurant, and often handed out free samples. By the end of that summer, Pulieri realized he had a number of repeat customers.

“In the years that followed, Grotto Pizza has continued to grow and prosper,” the company says. “In 1963, Grotto Pizza opened a second location at South Boardwalk in Rehoboth Beach. In 1967, the original Rehoboth Avenue take-out stand moved to its present location in the ‘Arcade Building.’ Still a pizza-only enterprise, Grotto Pizza continued as a seasonal business from May through October. Customers would take pizzas home at the end of each summer and freeze them in order to have the taste of Grotto Pizza through the winter. In 1974, Dominick opened Grotto Pizza as a year-round restaurant to meet the demands of his loyal customers.”

By getting out and talking to potential customers, Pulieri spread the word about pizza and his restaurant, and business continued to grow. Grotto Pizza now has 18 locations throughout Delaware and three locations in the Wilkes-Barre area of Pennsylvania.

“Although Grotto Pizza has expanded beyond the small take-out stand, the company continues to adhere to its core values of excellent food, friendly guest service and community service,” it says. “Grotto Pizza thanks its loyal guests for making it a legend in Dela­ware and beyond for the past 50 years.”

Known as being home to “the legen­d­ary taste,” Grotto Pizza offers traditional pizzas, panini sandwiches, appetizers, salads, pastas, subs and desserts, as well as 12 specialty pizzas and its “famous bolis” – the signature “grotto boli” comes topped with “ground beef mixed with our homemade marinara sauce and a special blend of cheeses.” Additionally, Grotto Pizza sells packages of its artisan cheeses and homemade pizza, marinara and pasta sauces in jars and gift packs.

Of course, it’s not just the quality of its menu items that makes Grotto Pizza well known – it’s the fact that Grotto Pizza has become a large presence in the community in a variety of ways. For example, Grotto Pizza sponsors more than 700 organizations annually, including events for local Police and Fire Depart­ments, schools, sports teams and charities. Each year, Grotto Pizza works with:

“For the past 50 years, Grotto Pizza has been lucky to feel constant state­wide community support,” the com­pany says. “As a way to give back to those who have supported us, Grotto Pizza strives to be an active part of all communities through event sponsorship, product donation and financial funding.”