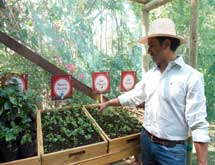 For some coffee companies, dealing with the end-user might seem like an unnecessary hassle that is not worth the trouble. But for Grupo Britt N.V., it is the only way of doing business, CEO Pablo E. Vargas says. “We have to do something different,” he says. “We have to get the end-consumer close to the coffee producer, similar to what happens [in] the wine industry.”

Based in Heredia, Costa Rica, Grupo Britt manufactures gourmet coffee and chocolate products. The firm, which started operations 25 years ago, has retail shops located in nine Latin American countries and enjoys annual sales of $100 million, Vargas says. The company’s products also are available to be ordered online for worldwide delivery at www.cafebritt.com.

The company also says it is environmentally certified according to the ISO 14001: 2004 international standard. “This means that we are proven to have programs and projects in place that make efficient use of natural resources, prevent pollution and reduce our impact on the environment to a minimum,” it states.

Concept Commitment
A factor that has made Grupo Britt successful is its commitment to the gourmet coffee concept, Vargas says. This has included the installation of a gourmet coffee roaster in those countries where the company operates and is a coffee producer, i.e.; Costa Rica, Peru and Mexico.

Although Costa Rica is known for its coffee, no firms in the country had sold “export quality” coffee before Grupo Britt, he says.

Instead, “You couldn’t find a decent cup of coffee here because the good stuff was all exported,” he recalls. “We try to be the only intermediary between the producer and the consumer.”

The company’s approach has been so successful that several case studies have been written about Grupo Britt, including one by Harvard Business School Professor and business guru Dr. Michael E. Porter. “[He wrote about] how we were successful in creating a high-end, branded company,” Vargas says.

Porter used the company as an example of how developing countries could market interesting products for consumers worldwide, walking up the value ladder in otherwise boring commodity-based industries.

Love for the Art
Vargas joined the company nearly 20 years ago while he was still in school. After he earned a master’s degree in Agricultural Economics, Grupo Britt asked him to return to his home of Costa Rica and come to work at the firm full-time.

“I love coffee,” he declares. “When you’re Costa Rican, most likely, you have to like coffee because this is a coffee country. The experience has been great.”

He adds that he has enjoyed growing over the years. “The coffee industry is fascinating in many instances, [because] it is similar to the wine industry.”

Like wine, the region and weather conditions where the coffee beans are grown can have an impact on flavor, as can the roasting process. “It is like an art,” he says. “You have to do the roasting in such a way that [it] optimizes the quality for that particular year.”

Specialized Service
While some coffee vendors take a standardized approach to the beverages they serve in each location, Grupo Britt does not. At each store, he explains, the company serves coffee that is typical to that region.

“So, in Mexico, we would sell 100 percent gourmet Mexican coffee,” he says. “In Peru, [we serve] 100 percent Peruvian [coffee]. It is different from what you would find in other parts of the world.”

In Costa Rica, consumers can buy Britt Coffee from the different regions in the country as well, complemented with light and dark roast house blends, as well as decaf and espresso blends, all under the Café Britt brand.

Grupo Britt also serves it with more expertise than competitors. At each shop, “You could ask all the information you wish about the region where the product comes from,” he says. All staff is trained in the art of coffee, and can explain to the consumer the full process “from the plantation to the cup” for each particular bag of coffee.

Its approach has earned the company praise from customers. In surveys, “We’re always better rated than the competition in the United States,” Vargas declares.

“Most of the time, we’re No. 1 or No. 2 in any product or service category. “We’re one of the only companies that can control [the quality of the product] from the plantation to the cup,” he says. “That makes a difference.”

But the company does not own the plantations. Instead, it buys from Coops and small growers who enter into a social and environmental standard promoted by Britt.

Ready to Grow
Grupo Britt is focused on developing new products and services, Vargas says. “That’s very unique in a traditional industry like coffee,” he says.

The company is at work on new organic candies and additions to its chocolate and cookie lines. “We’re also looking for seasonal or permanent new products in coffee,” Vargas says, noting these will be sold in the company’s shops in airports, as well as other travel retail outlets.

The products will include local materials from the stores’ regions. “I like that, because we developed a taste, what we call ‘sense of place’ that caters to the desires of the customers in a particular country,” Vargas says.

In addition, he thinks that the market is right for Grupo Britt to reintroduce its organic coffee products. The company was an innovator in organic coffee 20 years ago, but faced some market resistance at that time, and much of this resistance is now gone.

At the time, “We thought the consumer would be more receptive to organic coffee and would understand why the gourmet organic coffee has a higher price than the regular,” he recalls. “But we found it was hard to explain.”

Now, “The market is ready for more environmentally friendly products in coffee,” Vargas says. “We think many of the organic practices we have tried to promote will become standard.” The consumer is now more conscious that society have to do something for the environment, and is more willing to pay a premium for environmentally sound goods.

Grupo Britt also plans to grow the number of its locations by double digits in the next five to 10 years, Vargas says. “We have received interest from many airports in the region,” he says, noting that its stores not only bring in revenues but also help the airports establish their own identity.

Most airports, Vargas says, tend to look the same, regardless of the place they´re in. “By building destination shops, [we] give them a local identity,” he says. “The airport operators love that. It’s something they can brag about with their governments.”

It recently opened locations in the Dominican Republic and is about to open three locations in Costa Rica and two more in New Caledonia. “That’s on the other side of the world,” he says. “We have to see what else would be our next venture. We’re looking at a couple of [other] countries.”